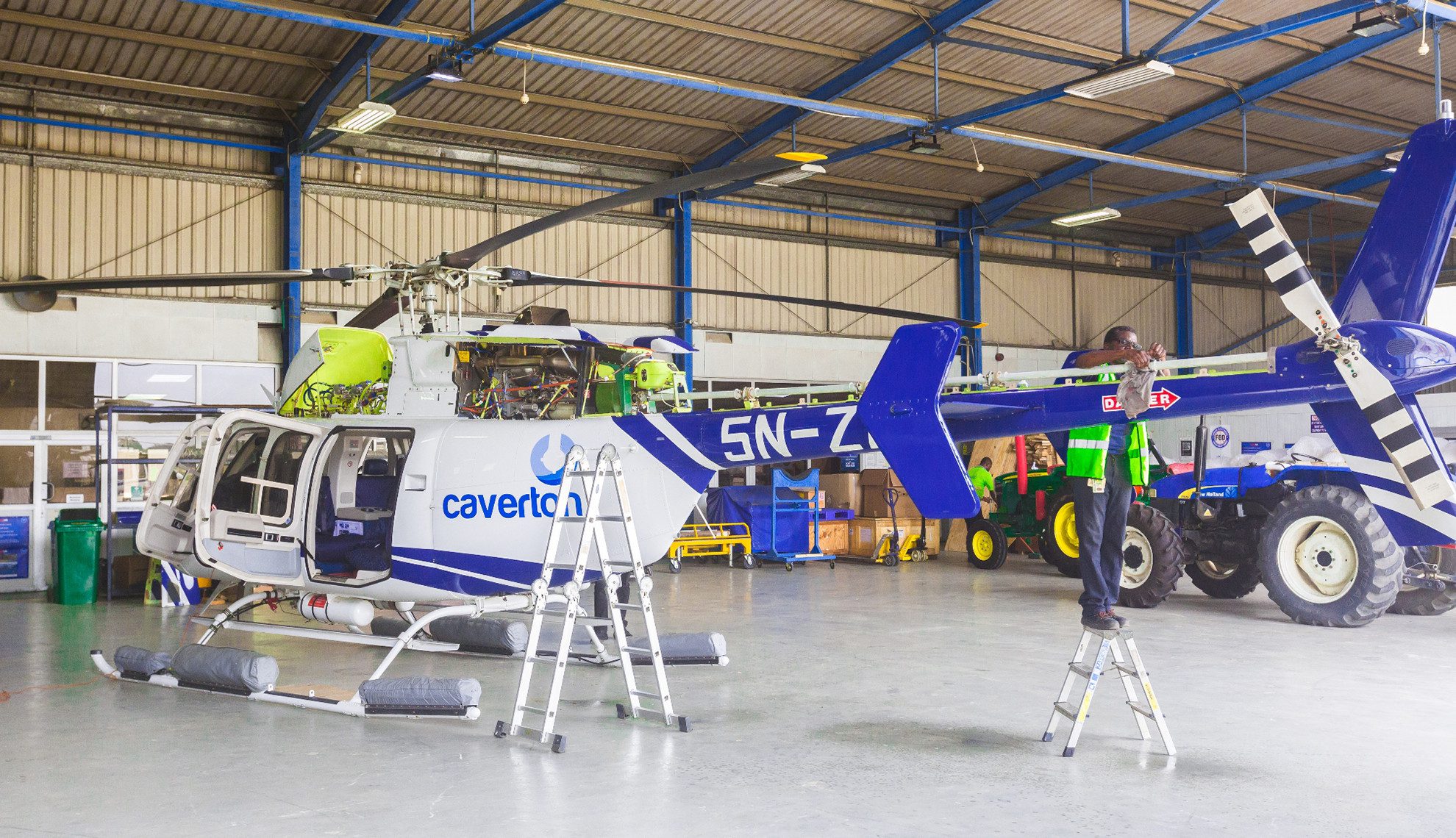 17 years in the making, Caverton Helicopters has helped transform the nation’s oil and gas logistics industry with its extensive aerospace expertise

With November 1925 marking the first landing of any aircraft in Nigeria, the 93 years since have seen aviation become both a critical element of the country’s transportation network and a major economic backbone.

This period has played rise to rapid national development, Nigeria now showcasing the spoils of West Africa’s most innovative and modernised aerospace progressions as the home of 20 airports, 23 active domestic airline operators and a further 22 foreign carriers.

In tandem with this headway, as expected has come diversification, evident in the rise of sub-sectors such as helicopter logistics. A branch that is now integral to the success of the region’s oil and gas industry, this was previously dominated by international businesses prior to the turn of the millennium – a status quo that piqued the curiosity of local firm Caverton Offshore Support Group (COSG).

“An already-active player in the marine sector, we knew that the helicopter market was monopolised by two major players and that neither of them were Nigerian companies,” explains Rotimi Makanjuola. “We became intrigued to know why no national entity had ventured into the market, realising that infrastructure played a major part, and this really got the cogs whirring.”

With its interests firmly captured, COSG proceeded to apply for land to build a hangar and construct a heliport. It was from this exploration that Caverton Helicopters was born as a division of the COSG group, an independent business that Makanjuola himself helps to head up as the organisation’s Chief Operating Officer.

“We figured we were already in the oil and gas support sector, so why not give it a shot – the opportunity was there,” he adds.

A formidable player
Makanjuola’s role was fundamental to the organisation’s initial success, tasked with overseeing the construction of the aforementioned heliport, an initiative that the COO describes as the catalyst to kickstarting his passion for aerospace logistics.

“I was never an aviator,” he admits. “I was fascinated by helicopters and flying but never thought this industry would shape my career.

“When I finished studying for my auditing and management masters at Cass Business School I returned to Nigeria to join the family business and was swiftly thrown into the shipping and trading of liquefied petroleum gas (LPG) that had little, if anything, to do with aerospace.”

Having helped facilitate the birth of Caverton Helicopters, however, the COO is able to look back fondly at how far the charter, shuttle and industrial maintenance company has come.

“Officially founded in September 2002, the business currently operates out of a 10,000 square metre flight facility at the Murtala Muhammad International Airport and has positioned itself as one of the leading indigenous oilfield services companies in Nigeria,” he adds.

What’s more, the division also operates several purpose-built facilities such as the Ozumba Heliport in Victoria Island, its NAF Base in Port Harcourt, and two further sites in Warri and Cameroon.

Leveraging this expansive footprint, the business is able to provide a selection of dedicated helicopter offerings, from offshore and onshore logistics and maintenance, repair and overhaul (MRO) solutions to private charters and executive ground handling services.

“What differentiates Caverton Helicopters from other industry providers in Sub-Saharan Africa is our ability to provide a formidable asset base, along with the right infrastructural support and technology to improve efficiency,” Makanjuola states.

Inspiring industry innovation
Alongside these facilities, Caverton’s asset base equally constitutes the soon to be completed world-class MRO centre, a secondary company site situated at the Murtala Muhammad International Airport and one that is set to be four times the size of the former.

“What’s really exciting for us, however,” reveals Makanjuola, “is that the brand new Caverton Flight Training Academy, a separate building housed next to the MRO centre, will host the first helicopter level D Full-Flight Simulator to be installed in Africa, something that we’ve been working on extensively in partnership with Thales.”

Named the Reality H Full Flight Simulator and renowned as the world’s most advanced commercial helicopter simulator, this is no less than a flagship investment for Caverton, set to be used to both meet the rising demand for helicopter pilot training and help eliminate related challenges.

“The simulator will enable pilots that fly AW139 twin-engine helicopters, one of the most popular models in the region, to be fully immersed in a realistic virtual environment representing Nigeria’s operational areas,” Makanjuola continues.

“Our staff will be able to learn to handle a multitude of system failures and overcome very complex malfunctions should they arise in the real world, and ultimately we believe this will increase the safety awareness of pilots.”

Coupled with this, the company’s existing training practices are rigorous, partnering with accredited and renowned overseas training providers to deliver courses that meet the necessary industry standards, while also working with the government to train pilots sponsored by the Petroleum Technology Development Fund (PTDF).

The simulator in particular, however, will serve to uphold a large range of modern educational needs, from type rating, recurrent training and proficiency checks for both visual flight rules (VFR) and instrument flight rules (IFR) that include offshore missions and VIP operations to unprepared landing sites.

Further, it will be certified to meet European Union Aviation Safety Agency (EASA) Level D standards, the highest qualification for any such simulator.

Reputable and responsible
Caverton’s emphasis on the importance of training in bolstering safety across Nigeria’s aviation sector is just one example of the firm’s esteemed attitudes in each of its endeavours, attitudes that are again reflected by its broad partnerships with many of the country’s leading educational institutions.

Education aside, the company also readily partakes in a broad variety of corporate social responsibility practices.

Asked if any such initiatives spring to mind, the COO cites a number of programmes that Caverton Helicopters has been involved in of late: “We’re a partner in Standard Chartered Bank’s ‘Seeing is Believing’ project aimed at combating blindness, as well as the American Foundation for AIDS Research (AMFAR) that undertakes AIDS prevention, treatment and research, and we donate to the National Sickle Cell Foundation (NSCF) to pay for joint replacement surgery for persons with avascular necrosis of the hip and shoulder joints.”

Nigerian sport is additionally a beneficiary of the generosity that is embedded into the corporate culture of Caverton Helicopters, the business also having sponsored a number of promising Nigerian athletes during the summer of 2015 at the Special Olympics World Games in Los Angeles.

Each of these activities combined, Caverton’s influence extends far beyond the domain of Nigerian oil and gas logistics, standing as an admirable proponent of social upliftment and development across a range of different verticals.

And, for this reason, both local communities and Caverton Helicopters itself have good reason to be excited for the remainder of 2019 and beyond with Makanjuola relatively optimistic about the current climate.

“We’re hoping for continued stability in the price of oil,” he reveals. “If it does, then we’ll definitely be expecting to see boosted investor confidence and increased exploration.”

Poised to take advantage of any progressive developments, the firm for now remains focused on the completion and inauguration of both its 40,000 square metre MRO facility and the accompanying full flight simulator training centre, two facilities that will consolidate the company’s position as a true market innovator.

“It’s undoubtedly going to be a busy year ahead,” Makanjuola reveals, “and each of these initiatives will keep us flying in more than one sense of the word.”