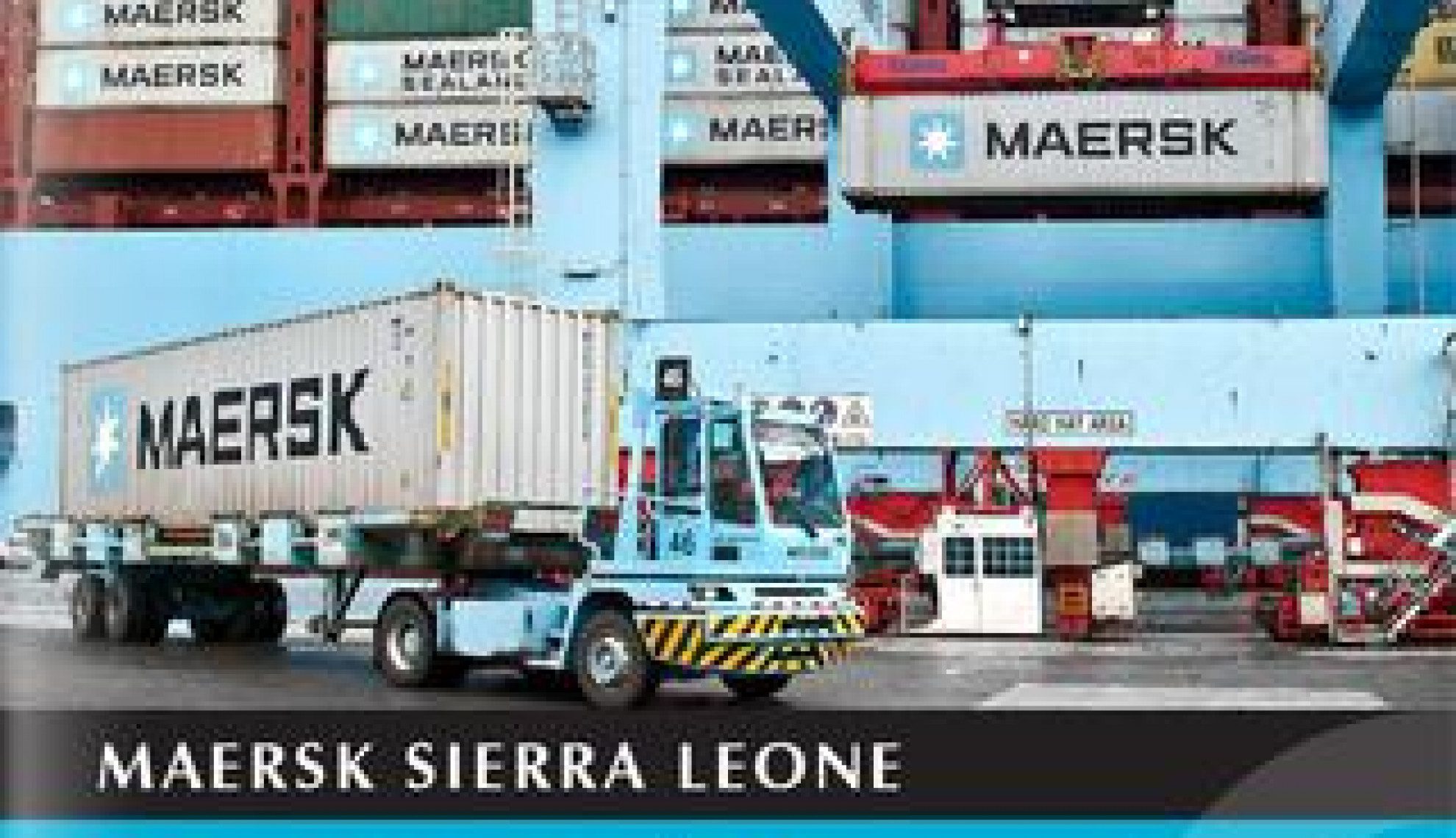 Delivering on its Shipping Promise

For almost two decades, Maersk Sierra Leone (SL) has been a crucial part of Maersk Group’s African operations, overseeing the carriage of cargo to and from Sierra Leone. In order to continue aligning its service offering with the high level demands and needs of the country, the Company has focused its recent investments on improving customer experience, while moving towards a standardised use of technology throughout its essential processes to align with the wider Group.

Despite the apparent 20 percent contraction in the Sierra Leonean economy in 2015 (according to the World Bank), Maersk SL has registered volume growth above five percent for the past few years, with 10 percent recorded in 2015, due in part to the growth of capital goods and fuel imports into the country.

Managing Director (MD), Lee Brough recalls: “This is a far cry from where we were when we first moved into the country; initially managed by a third party agent, Star Marine in 1996 and eventually establishing our own local office here in 2003 in line with the growth of the country’s economy; becoming more accessible to the growing number of customers in the market.”

Sierra Leone has limited finished goods production, which makes the country and its industries heavily reliant on the importation of goods. Maersk SL plays a leading role in the provision of international sea transportation of containerised cargo, where it carries at least three out of five containers to and from the country; including cargo ranging from basic foodstuffs and construction materials, to higher value commodity goods such as appliances and clothing.

“This year, it is estimated that we will carry 14,000 40-foot equivalent containers (FFE), which is an impressive feat given the economic and infrastructural challenges that Sierra Leone is facing,” he adds.

Africa’s market brings many other big challenges, but with challenge comes opportunity. The continent has witnessed relatively high growth rates in recent years when compared to more developed markets, and Brough says that with each year comes “comparatively greater progress”.

He highlights: “Opportunities are constantly opening up across various industries, all of which are in some way impacting the movement of goods.  There is a backlog of infrastructure requirements that are in various stages of being addressed and it is encouraging to see progress being made.

“Of course, there is still some way to go towards improving access to water and a stable electricity supply, as well as bolstering communication mediums to make them more reliable and bring down the cost of data access. Decision-making for parastatals can also sometimes be perceived as complex and time consuming leading to inefficiencies, however it is very rewarding to be part of the changes in the market overall.”

Maersk’s high reliance on cargo flows to and from Sierra Leone as a prominent industry leader in the country means that it has been highly impacted – both positively and negatively – by a contraction in the export market, while simultaneously experiencing a 10 percent growth in the import market. “Sierra Leone is seeing a slowing of timber exports and reduction in scrap metal exports, while also seeing growth in imports driven by the increase in demand for construction and foodstuffs. Despite the decline on the one hand, the market has remained buoyant as there will always be demand for our services,” Brough adds.

With a multitude of projects in the pipeline that look to improve the shipping environment, Maersk SL has placed a concerted focus on improving efficiencies in order to reduce communication bottlenecks that ultimately impact the customer and their overall cargo experience. “One of the top challenges we face in Sierra Leone is with regards to the technological capability of the local market.

With communication costs high and unreliable at times, we are looking closely at what we can do to create the best solution in the environment we operate in,” he explains.

For the past six years, Maersk has been looking closely at its global IT systems in order to streamline its processes across all its operations in order to address any inconsistencies in service levels. “This cleanup reduced the number of applications by more than 2,000 as we move towards a more standardised use of technology across the Group, but this is of course naturally impacted by if and how that technology can be accommodated at each location,” Brough notes.

“Technology is a crucial differentiator for the Maersk Group; after spending more than a century in the global market we have invested a significant amount of time and money into ensuring our internal and external processes benefit from state-of-the-art software and delivering on our shipping promise in the most efficient way possible.”

The recent implementation of Maersk’s case management software in Sierra Leone has been a key enabler that delivers multiple benefits to both customers and the Company itself. From backend systems that enable direct communication via EDI batch transfer messages to customers and suppliers, to remote monitoring of vessel bunker consumption, the right technologies form an integral part of the Company’s value proposition.

The case management software creates a reference number that tracks a customer query – provided the query cannot be immediately concluded – and this reference is then available to every colleague around the world to action in the most effective way. Brough says: “The software creates a standardised platform which enables further efficiencies in communication; for example, a customer does not need to repeat a query if they want an update on an issue, they merely quote the reference number.”

The Group is now working to stabilise the software to ensure that it will deliver the expected benefits when promoted to the wider Sierra Leone market.

Separately, Maersk has recently formed a strategic partnership with AT&T in order to have greater control over cargo quality, and ultimately, ensure a better customer experience. The partnership will allow the Company to initiate live communication with Maersk’s reefer (refrigerated) containers. “Our containers have been kitted with various communication devices so that we can remotely track and monitor the real-time condition of refrigerated containers,” he confirms.

Leveraging the wider Group expertise and investments, Maersk SL has spent a significant amount of its time hiring local Sierra Leoneans and putting them through various training schemes in order to upskill the available workforce in the country. These resource-intensive activities are designed so that employees gain a clear insight into the liner shipping business, and on-the-job training allows them to build an understanding of the Maersk company culture.

Brough says: “We tend to have a local approach to securing talent in all the markets we operate in, as the Group as a whole believes this leads to the greatest synergies. A key challenge for us remains in identifying the right calibre person to begin with, as a shipping course is not typically offered by mainstream training institutes in Africa, with the closest match being a course in logistics.”

Through extensive in-house training – both online and instructor-led – Maersk SL is able to tailor its training to the individual, based on their role and needs. Due to the substantial number of employees that the Group hire globally, there are also often specialist positions that need to be filled that require the movement of employees between countries so as to take on various assignments when required.

“However, raising the level of our local competency is also important and in line with this, personnel from Sierra Leone recently attended, and subsequently completed, international training  for the global sales organisation, despite the ongoing Ebola crisis at the time,” he highlights.

With the ongoing improvements being made to Sierra Leone’s basic infrastructure needs, such as power, water and telecommunications, Brough is hopeful that with time, there will be greater ease of business in the country. “We ourselves are also making ongoing improvements to our efficiency and technology infrastructure in order to improve our supply chain and reduce transportation costs; but our investments will also have a wider impact on the import and export efficiencies in Sierra Leone,” he summarises.

Led by the Group’s five core values – “constant care, humbleness, uprightness, our employees, our name” – Maersk will continue to be an integral asset to the global cargo shipping and oil & gas industries. These values are representative of its past, the present and its future direction, driven by continuous innovation and re-evaluation of its processes within a changing economy such as Sierra Leone, to better deliver on its shipping promise.