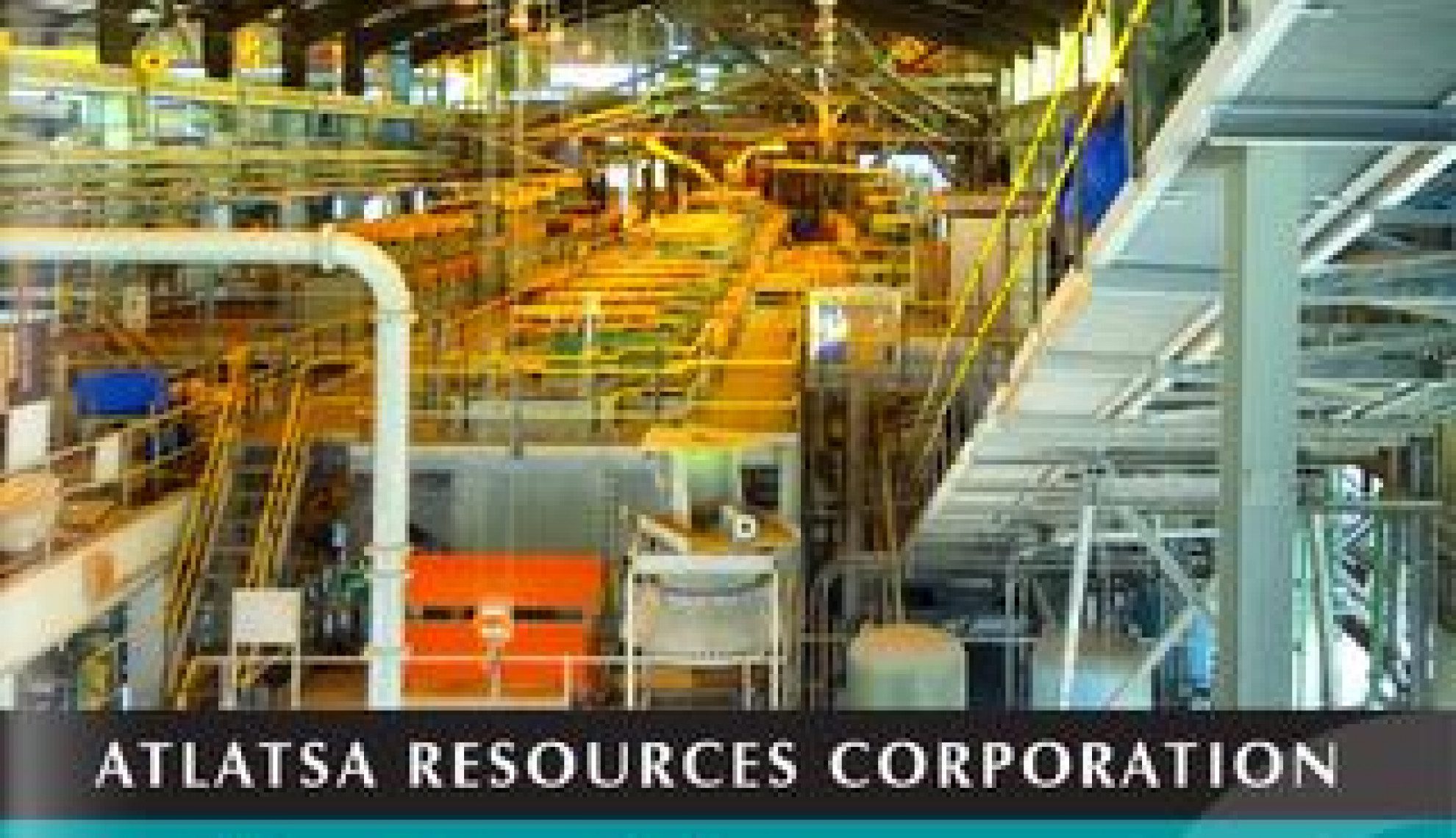 Atlatsa Resources Corporation is well on its way to achieving its mission of becoming a significant mine-to-market platinum group metals (PGM) company in South Africa as it carefully, yet proactively, positions itself for an expected market turnaround in the coming years.

The Company’s focus revolves around a 2020 production target with ramping-up phases and diversification within its operations being carried out at present with that goal in mind.

Known purely as Atlatsa – previously, Anooraq Resources Corporation – the black economic empowered (BEE) business was incorporated in the Province of British Colombia, in Canada, before later combining its PGM assets with those of Atlatsa Holdings, a private 100 percent BEE South African company. This combination affected a reverse takeover of Atlatsa under Toronto Stock Exchange rules, with the latter now holding 62 percent of the company.

“The transaction was completed in July, 2009, under which Atlatsa acquired 51 percent of the Bokoni Platinum Mine (formerly Lebowa Platinum Mine) and took operational control of the mine.”

The resultant structure has gone from strength to strength since then and now controls one of the last remaining significant high-quality PGM resources in the country; located on the Bushveld Igneous Complex (BIC) of South Africa.

The BIC is the world’s largest platinum deposit, producing in excess of 75 percent of the globe’s supply and comprising a Western, Eastern and Northern Limb consisting of predominantly Merensky, UG2 and Platreef minerals.

In Atlatsa’s case, mining operations are carried out across the Eastern Limb at the Bokoni Platinum Mine, since taking control of the site six years ago.

“Atlatsa is the controlling shareholder of the Bokoni Mine, and it was the first operating asset that generated revenue for Atlatsa,” Motaung explains. “The mining of PGMs is done by the Atlatsa team with the sale of the metal-in-concentrate sold to Anglo Platinum for smelting and refining.

The four-shaft Bokoni Mine complex currently produces 194,000 PGM ounces per annum, with the site consisting of a 154 million ounce resource base, a 12 million ounce reserve base and a 37-year lifecycle.

Before the real fruits of this resource base are unearthed though, Atlatsa is firmly focused on its extensive ramp-up phase, comprising two replacement, new generation and cost-effective decline shaft systems; complimenting its opencast Merensky mining operation to build a presence both over and underground.

The Company continues: “Stage One (2009-2014) comprised a capital investment of $200 million to expand the Merensky and UG2 4E PGM production to approximately 200,000 ounces per annum. The underground Merensky and UG2 operations achieved 140,000tpm of production in 2014 and the opencast Merensky operation continued to fill the mill gap of installed processing capacity of 160,000tpm and will continue to be managed of a flexible volume basis.

“Both the Stage One and Stage Two expansions at Bokoni are intended to access the Merensky and UG2 reefs from near surface to approximately 650 metres below surface. This presents a key technical and cost advantage, as there would be no need for significant refrigeration at these mining depths.”

This transformation and ramping-up phase will not only enhance Atlatsa’s status from junior to mid-tier PGM production status but will also facilitate the creation of an entirely new business culture at the mine through, not only the increased production, but also reduced costs and a more disciplined approach to orebody management and grade control.

Motaung emphasises: “Bokoni Mine remains an operation in development with its key Brakfontein Merensky and Middelpunt Hill UG2 development shafts remaining in their ramp-up phase, and on target to achieve steady-state production by 2020.”

Atlatsa revenue is derived from its PGM production – both Mersnsky and UG2 ore – at the Bokoni Mine, through the sale of metal-in-concentrate to Anglo Platinum, via a dedicated concentrate sale agreement.

While the company is still officially in a ramping-up phase to fully optimise the vast resource base, recent years have seen an early market pick-up in terms of production volumes, as Motaung reflects: “The Bokoni Mine achieved its highest production volume since 2006 with a 14 percent increase in total tonnes milled and 4E PGM ounces in 2014, from the 2013 financial year.

“The mine achieved its 160,000 tonnes per month (tpm) of concentrator milling capacity in 2014 so there is a positive PGM production trajectory.”

The well-developed sunken infrastructure of the Bokoni Mine, incorporating the development of the two new generation shafts, is expected to ensure a total steady-state production of 160,000tpm by 2020.

“Capital investments on these two shafts will cost approximately CAD$110 million in the next six years,” the CEO adds.

As well as a fast-evolving mining company, Atlatsa is also keen to explore opportunities in the exploration space in the BIC region, incorporating a 2002 agreement with Rustenberg Platinum Mines to acquire up to an 80 percent interest in 12 PGM properties located on the northern limb of the BIC.

The Company is subsequently investigating opportunities on these properties, including those of Kwanda, Central Block and Rietfontein, as Motaung notes: “As a small operator, the focus is on expansion development to increase the scale of the operations such that majority of fixed costs are absorbed and the mine moves down the cost curve graph.

“This will hopefully see an evolution of Atlatsa from a junior to a mid-tier PGM producer.”

Effectively owning 51 percent of the Kwanda Projects, a previously Bokoni Holdco-owned operation, Atlatsa is consequently in the process of sharing information and conducting exploration activities in the area; leveraging the knowledge of the wider BIC area and its already significant progress occurring in the Eastern Limb.

To achieve its goals, Atlatsa places much of its emphasis on the correct hiring and ongoing development of its employees; bringing to the fore aspects of local opportunity and internal progression.

“The Bokoni Mine is a community mine with 80 percent of employees coming from surrounding communities,” Motaung says. “Atlatsa invests in employee development through various training educational courses.

“We hire the best candidates in the mining industry from engineers, geologists and accountants, and the well being of our employees remains of paramount importance to us.”

This philosophy gives an insight into the Company’s wider adherence to corporate social responsibility applications; a facet which is pivotal given that its work has a direct impact on 6,000 lives, and an indirect impact on 150,000 people, in the Sekhukhune-land region.

Motaung continues:  “We engage with and invest in communities through various community-based projects. We allocate bursaries for mining engineering studies; we support foundational phase learning through a community crèche.

“We also offer portable skills ranging from carpentry, sewing, welding and bricklaying. We also recently completed a housing project in the Monametse Village.”

Additionally, Atlatsa stimulates local economic growth via successful SMEs, Zerbatone and BBP Mining and projects. Overall, there are 20 contractors currently supplying goods and services to the mine, including Fanang Diatla Bakery, Khomanchas slate quarry project and Mogorishane civil works; all of which ensure that the company’s immediate influence spreads further than purely its impact in the mining industry.

Atlatsa’s objective of becoming a significant mine-to-market PGM company is on track through its substantial and diversified asset base, and the promise of further progression to come over the next five years.

Future project acquisitions alongside its established organic growth will facilitate this migration from junior to mid-tier status even more  as it stays true to its three-pronged strategy of becoming a renowned producer, establishing a new operational culture and track record at the producing mine, and continuing the Company’s asset portfolio development.

“Atlatsa is not just an investor but rather a BEE PGM operator that invests in communities through educational support and local economic development. We’ve taken the bold decision to build through challenging economic times, positioning ourselves for a turnaround in PGM markets,” Motaung concludes. “We have a large, high quality orebody with a Merensky focus and also have a comparatively low capital requirement to fund growth.

“The development of the two new generation shafts, Brakfontein and Middelpunt Hill, remains on target to achieve steady-state production levels of 160,000tpm by 2020 and this development will position us favourably for a turnaround in PGM markets.

“In this challenging economic environment, we continue to focus on various initiatives to improve operational efficiencies, disciplined capital allocation and cost management, without compromising the mine’s existing ramp-up plan.”