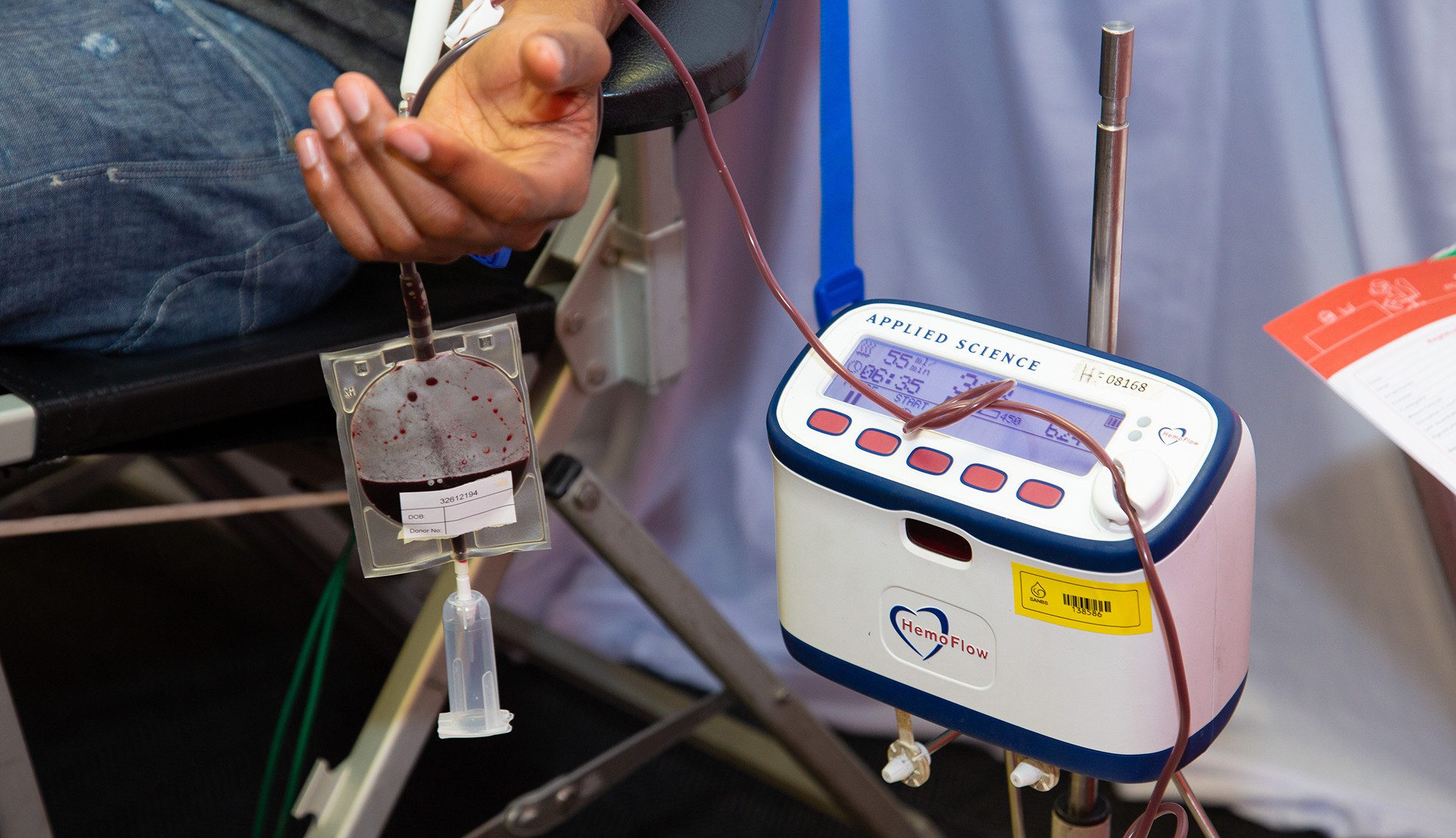 Trusted to Save Lives

From drones to data to digital journeys, SANBS is leveraging the latest technologies and best practices to ensure it meets the blood-borne needs of South Africa’s healthcare scene

“Imagine being a regular blood donor. Then imagine receiving an SMS text message telling you that today your blood was used to save the life of a 14-year-old child that was suffering from leukaemia.

“Saving a life is the greatest gift that anyone can give, and to let donors know that they are doing this would be truly special. It’s part of the reason why we’re looking to create a digital journey and act as a corridor in better connecting them with patients.”

Around the world, almost every industry is tapping into the transformative world of technology. In South Africa’s medical sector, this is no different.

The opening quote comes from Jonathan Louw, an individual who has been  the Chief Executive Officer of the South African National Blood Service (SANBS) since January 2018.

In the near-two years since, he has helped to make a number of strategic adjustments that have seen the organisation modernise not just technologically but in a vast multitude of ways.

“Being a clinician trained in anaesthetics, I have always had a good understanding of transfusion medicine, as well as a number of friends and colleagues who are transfusion specialists themselves,” Louw reveals. “Even before starting here, they would say to me that the good thing about SANBS is the fact that it ensures that blood is safe. But the problem is there’s not enough.

“I came in with that understanding, and we have set about trying to address that problem ever since.”

Reaping the rewards of bold change

Quickly formulating a new strategic mission, the organisation has already taken great strides in making the present situation more manageable during the course of the past 22 months.

Adhering to global recommendations from the World Health Organization, SANBS has expanded its accessible blood reserves from just one or two days’ cover to five days’ cover, doing so through the pursuit of numerous initiatives.

“We’ve partnered with Nespresso to provide free, good tasting coffee in our donor centres, and now offer iron supplements free of charge, for example,” Louw states. “And we’re also placing a stronger emphasis on the role of our mobile units.”

In relation to the latter, SANBS has actively been leveraging data and new analytics capabilities, geo-mapping where particularly plentiful donor pools might be across South Africa and positioning its mobile units in these locations, making it easier for those who are interested in backing the not-for-profit’s efforts to do so.

Combine this with the ongoing digital journey that Louw eludes to, not to mention efforts to provide new digital channels from which donors can interact with the organisation digitally, and recent innovations have proven to be particularly fruitful.

“Resultantly, we’re now able to maintain five days’ cover, and even seven to 10 days’ cover in some cases. Where before doctors weren’t getting the volumes of blood they required as often as 10 percent of the time due to shortages, we’re now proud to say that we’ve had zero cutbacks in the past nine months.

This achievement is all the more impressive considering the increase in demand that the organisation has experienced, up 15 percent already for 2019.

Yet it is not the only benefit that has been reaped from the organisation’s revolutionised model. Internal operations have also become both less frantic and more secure.

The CEO continues: “We’re now less frenzied, less hand to mouth, when it comes to collecting blood, not having to quickly run it through our systems before couriering reserves around the country in a relatively expensive way.

“We’ve been able to slow down. We don’t have to run overtime and night shifts consistently; we don’t have to work every public holiday and every Sunday. There’s less propensity to make mistakes and our costs have come also down, making us much more sustainable as a not-for-profit than we have been historically.

“It’s been a pretty good chapter to our story of late.”

Prompted by talk of financial sustainability, Louw turns his attention to some meaningful investments that SANBS has been freed up to make of late, owed to its renewed, more flexible approach.

Unsurprisingly, the drone project has recently been taking the spotlight in this domain.

Launched to provide better coverage – one of the organisation’s four key metrics of success alongside reliability, cost and quality – the drone programme harbours the sole purpose of transporting life-saving blood to needy patients in hard to reach, rural areas and address critical incidents within the golden hour.

Indeed, SANBS already has extensive coverage, its footprint spanning 185 sites (including 84 blood banks) across South Africa. But for those regions that it has struggled to service until now, the drone programme is set to become game changing.

“We’re hopeful that the services provided by drones will be particularly useful in meeting the needs of remote hospitals that house midwifery units, where the presence of maternal mortality in South Africa is particularly high,” Louw affirms.

With the drone programme awaiting the imminent completion of its proof of concept before seeking civil aviation approval next year, the organisation has meanwhile been developing and implementing what it calls smart fridges – a second innovation that has a similar purpose.

“These are essentially ATMs that dispense blood,” Louw reveals. “It’s not feasible that we can have a blood bank in every corner of the country, but we can fit these ATMs at smaller hospitals and send codes via SMS text messages to local healthcare workers. They can then dispense the appropriate amount and type of blood for the specific needs of any patient.”

Indeed, SANBS is certainly heading in the right direction by pursuing such initiatives. But the organisation cannot take all the credit for them, its suppliers having played an equally crucial role in facilitating these developments.

From the technology powering the testing of every single blood donation for communicable diseases such as HIV to those supplying reagents used to separate blood into its various components, to the courier firms that assist in the transportation of products, SANBS is highly reliant on the fruitful relations it has with its partners across the board.

“The role of our partners is critical,” Louw affirms.

“They each need to respond to our countrywide footprint just as we do, and so are a crucial part of the journey when it comes to making sure blood is available all the time. They’ve really embraced our four metrics and strategy and for that we are grateful.”

Similar praise is also directed to the company’s staff – a team the CEO describes as dedicated and diversified.

“Investment in our workforce is a major focus here,” Louw continues. “We make sure we recognise their contributions and give back wherever possible.

“We have a fully-fledged learning and development department that is used to train our own phlebotomists, employ hundreds of nurses and numerous doctors, and even has a highly specialised in-house team of consultants – experts in cellular therapy, cancers therapies and more.

“We also try to uplift local communities with an emphasis on broad-based black economic empowerment in our employment practices. And it’s an area we’ve made great strides in within recent years. We set a 2020 goal of having an 88 percent representation of previously disadvantaged groups and hit this earlier in 2019.”

As the latter target suggests, social responsibility is a major part of SANBS’s remit, further evidenced by the organisation’s self-imposed role as a key proponent of national skills development.

Not only does it support its own staff, but it also facilitates the training of other practitioners, particularly those in the public sector, on the provision of blood and blood transfusion services, taking an active and engaging role in the wider community.

Going above and beyond

Much like many of the organisation’s other initiatives, this is once again in the aim of ensuring the reliable, safe, widespread supply of blood and blood-related services across South Africa – SANBS’s overriding purpose, and the primary goal that it will continue to pursue moving forward.

This is not the only way in which it is hoping to progress, however, Louw also eluding to plans for further diversification into additional therapies.

“As the donor pool and amount of blood available has increased, we’ve naturally had to cater to more blood-related therapies, as well as increase our presence in cellular therapies such as those of stem cells,” he explains.

“The pressure from this continues to rise, so it will be an area we’ll be looking to address in the coming months.”

Further research efforts are also being attributed to the communicable diseases space, SANBS looking to assist national and global efforts in finding cures to HIV.

“And it’s so important that we do so,” the CEO continues, “both to help save lives and protect the donor pool.

“In a market like South Africa where roughly 13.5 percent of the population is HIV positive, and there’s such a high burden of disease, the donor pool is actually much lower than the population might suggest, meaning we’re having to look increasingly hard for eligible donors.”

Through continuing to collect more, continuing to improve coverage with innovative solutions, and journeying into new streams of cellular therapy products, the not-for-profit’s focus is broad to say the least for the coming year.

Yet despite the challenges that will come with such a heavy load, there is great cause for optimism at SANBS. The organisation has achieved a great deal during its transformation over the course of the past two years, and current rates of improvement are only expected to accelerate as similar efforts emerge in the future.

“Obviously SANBS had been run a certain way for a great many years, but we’ve been experiencing a vast number of change processes – a lot of cultural change,” Louw reiterates in his concluding statements.

“Historically, less than one percent of the South Africa’s 57 million citizens have been active donors. Yet thanks to this change and the hard work of our donors, partners, staff and the general public, we’re now poised to exceed this threshold.”