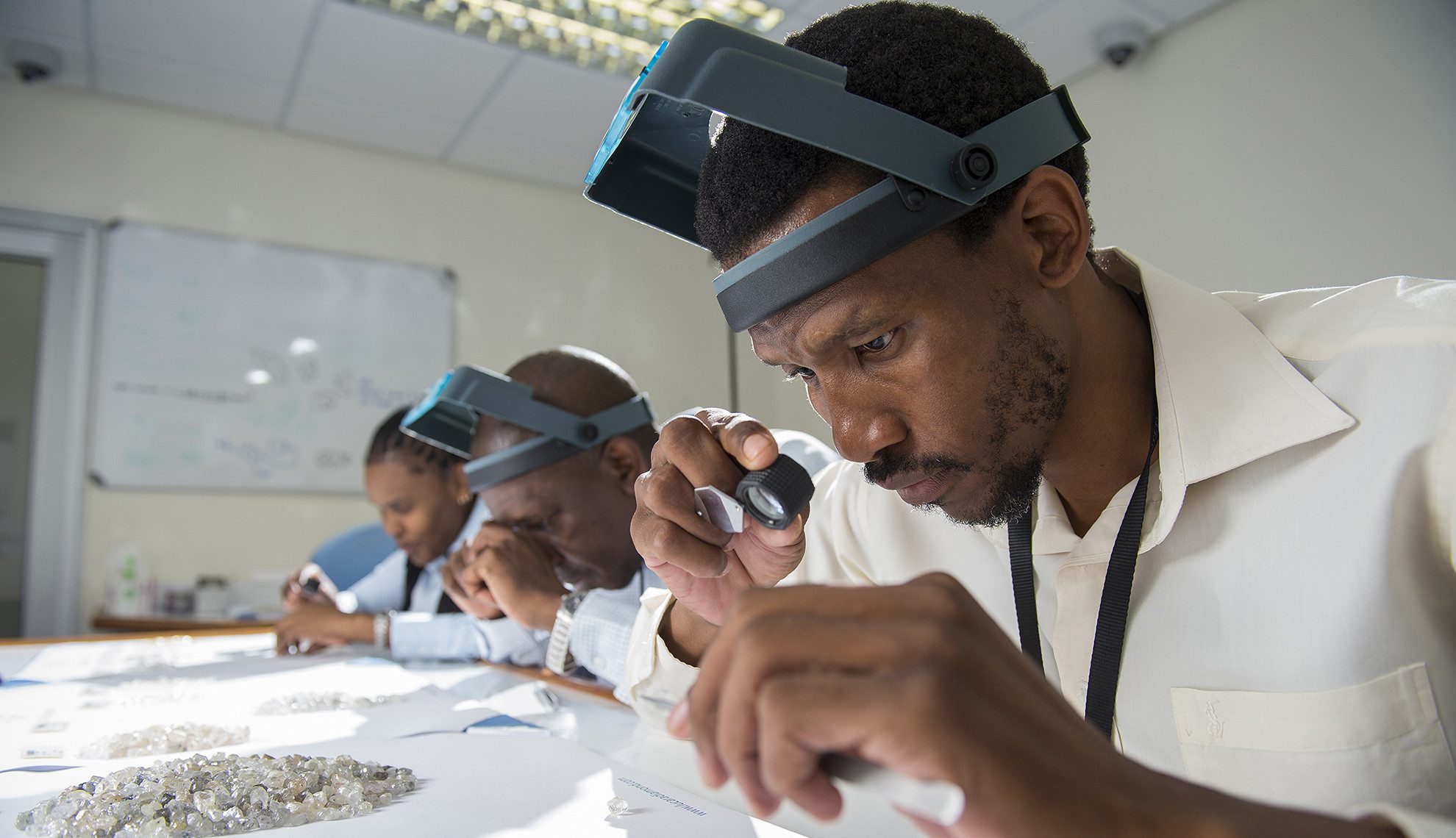 Lucara Botswana is mining for the nation at its Karowe resource, its large premium diamonds being extracted and sold using leading-edge technology operated by upskilled local experts

Botswana’s affinity with diamonds stretches back many decades.

Serious exploration began in the 1950s in the Tuli Block along the Limpopo River, and in the years since the West African nation has become renowned for its diamond production capabilities.

Such ventures have also proven to be a vital economic contributor to Botswana, providing employment to thousands of citizens and generating enormous revenue which has funded important infrastructure projects.

“The market is stable and will not drop off,” observes Naseem Lahri, Managing Director of Lucara’s Botswana division, the first wholly private entity to be mining diamonds in the country. “Diamonds are so unique – there will always be a demand.”

Lahri is the first Botswanan woman to be promoted to the position of Managing Director in a national mining company, initially joining the organisation in 2013 following a long and fruitful journey with Debswana, the joint venture between the government and De Beers.

“I worked in auditing for a couple of different companies over several years when an opportunity to work with a colliery arose,” she recalls. “I enjoy working in challenging environments and mining certainly fits into this category, so I decided to give it a chance and stayed there for two years.

“The experience opened up my mind to the world of mining – the challenges, the opportunities, the excitement. After working for 12 years with Debswana, who owned the colliery I started at, I felt the time was right for a new challenge and took the opportunity to work for Lucara.

“The company had a lot of prospects with a new mine being set up, so it presented a chance to start a new project almost from scratch, and I have never looked back.”

The Karowe resource
Lucara’s Karowe mine lies in the central eastern portion of Botswana, located around 20 kilometres away from the town of Letlhakane, which is home to approximately 26,000 people.

A state-of-the-art facility commissioned in 2012, it is known for its production of large Type IIA diamonds in excess of 10.8 carats which have included landmark finds such as the 1,109 carat Lesedi La Rona and the 813 carat Constellation.

“Our niche is that we sell exceptionally large stones,” Lahri says. “It is a niche market and we don’t tend to sell finer diamonds, so we are relatively sheltered from ups and downs in the wider industry.

“In fact, our portion of the market – the Type IIA which only makes up one to two percent of the entire diamond population – is growing and remains a thriving business.”

In monetary terms, the company expects Karowe to generate $170-200 million in revenue this year, building on the 2.4 million carats worth of diamonds it has sold to date. This has included 180 diamonds each selling for more than $1 million and 10 stones fetching more than $10 million apiece.

The operation is therefore an extensive one, reliant upon a team of around 1,200 workers at any one time, 300 of which employed directly by the company. Some 98 percent of these employees are Botswana nationals, a key priority for Lahri being the upliftment of the surrounding community and ability of Lucara to give back to the nation.

“Community engagement is vital to us,” she says. “For example, the name Karowe, which means precious stone in the native language, was named by the local people, and we have also engaged the population to name our biggest diamonds like the Lesedi La Rona.”

Cutting edge technology
As well as supporting the community through direct employment, Lucara ensures 80 percent of its procurement activity is carried out locally, an approach which also involves encouraging international suppliers to establish a local base in Botswana.

This is no better demonstrated than by two recent technological investments.

The first is in the form of new XRT equipment imported from Germany, a first of its kind system which uses x-rays to assist the diamond recovery process, complementing the use of autogenous milling techniques to optimise revenues and minimise diamond losses.

“We have been investing in technology which has not been used in the diamond industry before, and this kind of XRT is one example,” Lahri says.

“We requested that the German manufacturer set up a local maintenance team, and this has helped to transfer the skills needed to operate and maintain these machines into our organisation. By the end of this year our workforce will be ready maintain without OEM supervision and could be sought after around the world to train other miners.

“There are a lot of diamond skills in Botswana – this is just one example of us upskilling the local population, a key part of our strategy, which also involves promoting from within and detailed succession planning.”

A pioneering digital sales platform and another first for the diamond mining industry, Clara uses proprietary analytics with the latest cloud and blockchain technologies to sell rough diamonds individually, based on polished characteristics and demand.

The system is transforming the sales process, driving efficiencies and unlocking value for diamond producers and manufacturers.

“From a market perspective, people generally buy stones in lots, meaning they often end up with diamonds they may not want,” explains Lahri. “With Clara, buyers and manufacturers can buy exactly what they need, and likewise they can sell any excess stock through the platform to free up working capital.

“This system also cuts out the middleman, meaning producers of diamonds like us and manufacturers can save money by selling and buying in this way.”

A lasting legacy
In creating a cutting-edge operation at Karowe and with it a formidably skilled workforce, it is clear to see how Lucara is working to give back to both the local community near its mine and Botswana as a whole.

Indeed, for Lahri the notion of legacy is of paramount importance, not least because she is a Botswana national herself.

“This country has given a tremendous deal to me and I want to give something back through our successes with Lucara,” she says. “Our Botswana first ethos is therefore at the forefront of what we do, evidenced by our corporate social responsibility activity.”

Lahri points to two recent examples in the farming sphere.

“In October 2018 we launched an integrated farm project in Mokubilo, another first of its kind in Botswana,” Lahri continues.

“This pioneering farm is managed by a board made up of members of the community and is already selling eggs, and will be supplying a range of other foods like cabbages, peppers and maize in a sustainable way. All of our CSR projects must be sustainable and have total community buy in and impact.”

The second development involved the construction of an abattoir facility in Letlhakane. Handed over to the local council, the slaughterhouse enables local livestock farmers to utilise a safe and reliable asset in order to bring their goods to market.

By continuing to invest not only in its own operations but also the wider community, Lucara is building on its already established reputation in Botswana, a reputation proven by the government’s embracement of its investment in the country.

“We want to invest even more,” Lahri adds. “The major priority for us is to go underground, and at the end of this year we will have a decision on a feasibility study which will tell us whether this is a viable option.

“I am cautiously optimistic the project will go ahead, and if it does it will provide the opportunity to contribute towards the country’s vision for 2036, as it will extend our life of mine by another 10 years.

“We are also looking at other prospecting licenses and are carrying out some exploration with a view to adding more assets to our footprint in Botswana. This is very much my mandate.”

Looking ahead to the outcome of this year’s feasibility study, Lahri concludes by restating her wider optimism regarding the future development of her beloved country.

“Botswana is politically and economically stable. The government is very open to private investment and is willing to listen to companies like Lucara and welcomes what they can offer. I am therefore optimistic for a bright future.”