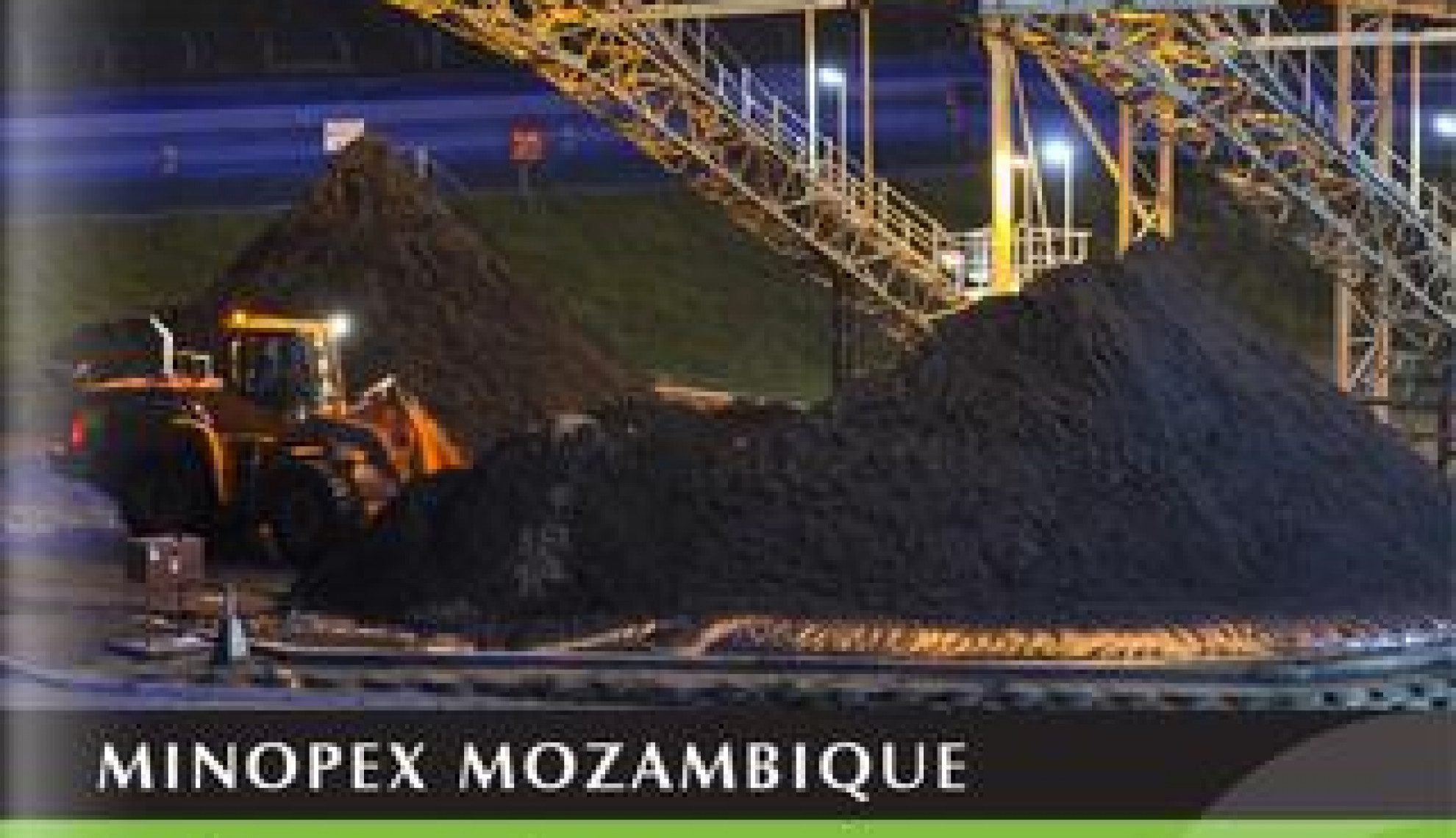 Perfectly Placed for the Commodity Boom

Minopex has worked tirelessly to replicate its well-established South African operations in Mozambique over the past four years and is now in a prime position to capitalise on a future boom in the commodity market in the country.

Invited into its initial operation in the East African nation in 2011, the mining operations and maintenance contractor has since leveraged and duplicated the vast expertise and industry knowledge across the full range of mineral processing activities to now be the leading player in Mozambique; stealing a march on any prospective competitors looking to enter the rapidly developing country in years to come.

Since being chosen by Jindal Steel and Power to carry out operations and maintenance at its Chirodzi plant, Minopex Mozambique has gone from strength to strength through the attraction and application of its full turnkey offering.

The Company’s Managing Director, Dave Spottiswoode says: “The move into Mozambique was a general move from our owners, Minopex South Africa, with it necessary for the Company to expand across borders.

“Our turnkey approach has been very successful across the Group because it saves the clients on capital, with us essentially doing the dirty work for them. The only aspect the clients own and need to bring to the project is the plant itself.”

The remaining elements taken care of within the Minopex service comprises the personnel from top to bottom and all technical equipment, all the way to office furniture, vehicles, IT software and major tools needed to fulfil the requirements of the plant.

Across the wider Group, Minopex is equipped to run plants processing the full host of minerals; from diamond, chrome, platinum and gold, to coal which is the sole commodity being catered for within Mozambique at present.

“The world’s commodity market isn’t great at the moment, and things are tight in Mozambique, but what we have done is position ourselves for the next couple of years for when things get better and take off in a rather big way,” Spottiswoode continues. “We’ve set ourselves up; we’ve got the vehicles, the people, the accommodation, and everything else required within Mozambique.

“We’re there, and now we’re just waiting for the boom.

The turnkey philosophy which has been so integral to Minopex’s growth over the years is epitomised by the Group’s initial rise in South Africa between 1996 and 2012; by which point the Company was carrying out operations and maintenance across 27 plants for some of the industry’s most well-reputed businesses.

“Ranging from diamonds, platinum, gold, coal and chrome – basically any metal or mineral – we have the ability to get involved in it. This became a very popular model quite quickly because the bigger we became, the more versatile we became as well.”

This versatility enables Minopex to pull upon expertise, equipment and capacity from adjacent plants, while keeping more administrative processes centralised to achieve an ideal balance from which to expand and remain entrepreneurial and flexible.

“This flexibility was something we were moving away from in South Africa purely because of the size we had grown to,” Spottiswoode says. “My belief is that every operation is different and every client is different, and my idea is to run the Company as a silo type of operation with each plant running exactly according to the client’s specifications.

“If the client wants us to supply the vehicles then we will, but if they prefer to supply their own, then we won’t. The same goes for the purchasing of consumables or raw materials, for example.

“We’re extremely versatile and open in our offerings, and willing to tailor our operations to each client’s requirements within their plants.”

With the all-encompassing, yet customisable, approach that Minopex has honed and refined over the years still a niche attribute in the industry at large, the reputation that has been formed within the sector has been comprehensively positive, and has laid the groundwork for all current and future contracts being attained.

“When discussing big contracts, we are able to state confidently that we can perform to the highest standards because we have the track record proven throughout our other operations. Essentially we can display that we do what is required better than the client could do it themselves,” Spottiswoode states.

This track record is equally impressive from an all-important health and safety perspective with no lost-time injuries reported across its tenure in Mozambique; Spottiswoode emphasising this element and the safety of Minopex’s employees as “the driving force behind operations, and first and foremost in carrying out processes”.

As a consequence, Minopex is also at the forefront of potential clients’ minds, including, most recently, Vale. Having completed short-term periods of operation for the globally-renowned organisation in recent years, the two businesses are now looking at a potentially longer term partnership.

“It is an owner-operated plant which they have asked us to come into over the past three years for commissioning and training of their people,” Spottiswoode explains. “They’ve seen us come in and make massive improvements for six-nine month periods, and have also seen those improvements fade away when we’re gone, so for them to look at us to operate their plant moving forward is major because it is by far the biggest operation in Mozambique.”

Expanding the footprint into Mozambique hasn’t been exclusively challenge-free despite the leveraging of the Company’s South African experience and unrivalled regional reputation, with skills shortages in the still maturing Mozambique a problem which Minopex has had to resolve internally.

An extensive localisation strategy has been integral in developing national levels of expertise, with the overall aim of reducing the amount of expatriates working within the business.

Spottiswoode notes: “It is not only of primary importance in order to develop the locals within the country, but also in reducing the amount of capital going towards expats and all the salaries, accommodation  and travel costs that come with them.

“So, both in terms of costs and what we needed to do for the benefit of the country, we have an extensive localisation strategy which we have been running for three years now, and we have now got to the stage where we are virtually only reliant on local artisans that we’ve trained ourselves.”

Having established such a foothold in Mozambique before the real industry boom has even taken place leaves Minopex in a commanding position moving forward with any new entries to the market having to play catch-up and build a reputation from scratch.

It also fulfils the more concerted, overriding philosophy of utilising local resources which can similarly be seen throughout its supply chain where possible, and through the Company’s adherence to CSR in the surrounding communities.

Regardless of the dominant market position that Minopex enjoys within Mozambique, the Company still refuses to rest on its laurels, continuously looking for new opportunities to improve its current operations, as well as looking for new plants to operate within.

“We’re always on the lookout for new plants but things are constrained in Mozambique at this moment in time so we have moved out of our normal operations and maintenance practices to diversify in the country,” Spottiswoode says.

The result is a separate company having been formed called Ensermo (Engineering Services Mozambique) which has been $2.5 million in the making and consists of a specialised engineering unit.

The Managing Director explains: “In South Africa, there are usually specialist engineers local to your operations, but there are none of those advanced services available here in Mozambique, so we took the decision, based on us planning to be here for a long time, to build a fully integrated workshop in the Tete area at our own cost.”

Already coming into its own in carrying out major overhauls, motor rewinds, pipe installations, steel fabrications and analysis activities, the recently commissioned addition to the Minopex portfolio is a niche which has already brought the Company a lot of business as it looks towards the next stage of its development in Mozambique.

Spottiswoode concludes: “Moving forward, we will remain totally focused on our clients and their needs and will continue to bend over backwards to do what they want and require.

“We have training programmes in place to attract the right people in order to do this as efficiently as possible and, as we’ve proved in the past, we believe we can operate the plants more efficiently than the owners themselves.”