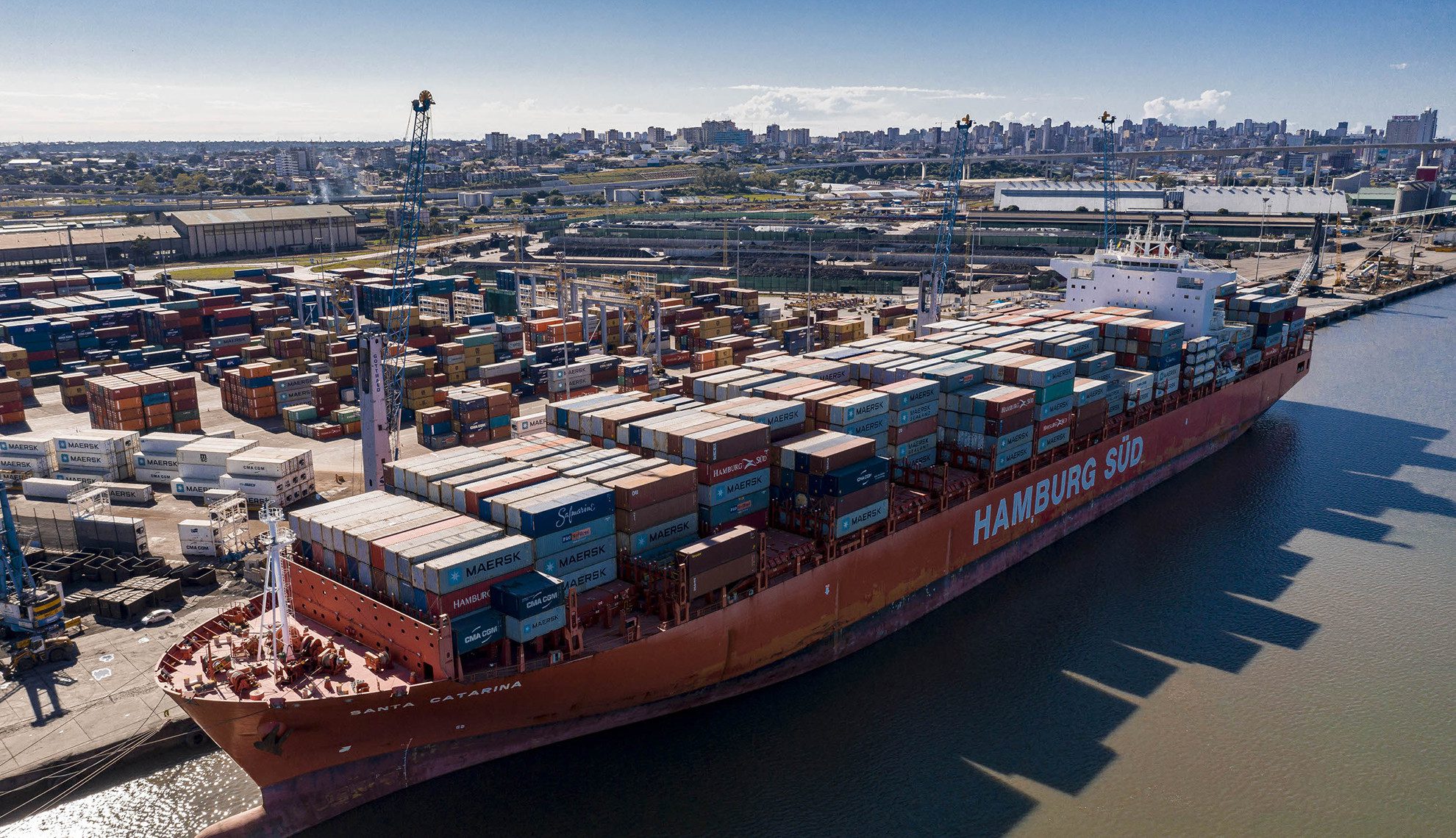 As DP World continues to develop its container terminal and surrounding infrastructure at Maputo, the firm’s customer-centric ethos and bold plans for expansion are placing it on the regional map

Originally named after Portuguese trader Lourenco Marques, who first explored the area in 1544, the city’s container terminal has emerged as an important conduit linking local industrial endeavours (such as mining) to the markets of eastern and southern Asia.

And with enviable land connections to the likes of South Africa, Zimbabwe and Eswatini, as well as sea connections via shipping lines travelling to Europe and the Middle East, India, and East Asia, Maputo can rightly be regarded as a global transit hub.

DP World has been managing, developing and operating the Maputo container terminal since it acquired previous stakeholder P&O in 2006, with Mozambique International Port Services being renamed to DP World Maputo two years later.

Christian Roeder is the company’s CEO. An industry veteran who has spent many years in Southern Africa having started his career at Maersk, the region’s steady growth and still undoubted potential to develop further is what has kept him here for more than 15 years.

“There are certainly exciting developments occurring, and to be a part of it has been a very rewarding experience,” Roeder says.

“In terms of imports and exports a lot of people are dependent on this port to access not only Mozambique, but the wider region and countries like South Africa. East-west trade dominates with very little movement between north and south, and Maputo is right on the end of one of several east-west trade corridors that run through the country, while also serving India.

“It is therefore our obligation to Mozambican clients who must use us to keep costs down, and improve our efficiencies. If we can help keep the cost of trade down, we will have done our job.”
The DP World Way
As part of the largest marine terminal operator in the world, DP World Maputo carries considerable brand trust, its core activities being centred around the discharging and loading of containers in vessels.

For Roeder, the firm’s customer-centric approach to doing business is what stands it apart, the CEO determined to breakdown what has been a misguided perception about using Mozambique for transit.

“I think there has been a psychological barrier for quite some time,” Roeder says, “with fears about bureaucracy and the different language here.

“However, we put the customer at the centre of our thinking and that is reflected by the repeat business we receive, and that is crucial. I know this because I have been on the other side as a port user many times, and I know how frustrating it can be to deal with bureaucracy and inefficiencies.

“We therefore try to be proactive and tackle issues such as gate congestion, and put in a lot of energy into dealing with customer enquiries regarding container releases as quickly as possible.

“It is also important to look at our operations with a wider lens. For instance, if it takes several hours for a truck to get in and out of port, then the fact we can service them within 20 minutes once they are here makes it a somewhat meaningless KPI. We look at how we fit into the end-to-end logistics process. This perspective, I believe, makes us different.”

Indeed, making life easier for customers is engrained in organisational culture around the world, its stated purpose being: a global approach to a local business environment where excellence, innovation and profitability drive our core business philosophy of exceptional customer service.
Bigger and better
And these values will only continue to be strengthened as DP World Maputo forges ahead with an ambitious phased expansion plan.

The work is already starting to pay off. In April 2020, for example, DP World Maputo welcomed its largest ever vessel when the giant Santa Catarina, operated by Maersk, called into port carrying 3,310 containers.

Further still, Roeder outlines important plans to upgrade cranes and boost the site’s rail operation, the plan being to install four sidings of 750 metres. A linked South African dry port, DP World Komatipoort, is already in operation, a facet of DP World Maputo’s offering that again will be expanded in the coming years, helping to bring it closer to its clients.

“This will help us present Maputo as a viable alternative corridor to Durban,” Roeder says.

“We’re at the stage where we want to grow beyond the port. Maputo port has been trying to tap into the hinterland business for at least 10 to 15 years and there have always been issues, but we are making progress and using technology to make it easier for our clients to use us.

“A big priority is to open up access to rail services, and we are working closely with our fellow shareholder Caminho de Ferros de Moçambique (CFM), the national rail operator. If we are able to shift more cargo off of Mozambique’s roads and onto trains, then this will reduce pressure on a road system that struggles to cope with huge numbers of trucks.”

Indeed, Roeder is quick to acknowledge the vital role that the company’s entire network of suppliers play, the combination of these relationships ensuring that DP World Maputo is able to serve its customers efficiently 24-seven and deliver impressive turnaround times.

From crane manufactures to technology vendors, an effective container terminal operation relies on a series of stakeholders each playing their role, the development and expansion of Maputo dependent on these partnerships continuing to flourish.
The COVID conundrum
To suggest that these ongoing developments are not progressing without challenges, however, would be a huge understatement.

This year will be remembered as the year that coronavirus caused a global health and economic crisis, the impact felt in almost every region around the world with the African continent beginning to see a sustained rise in cases.

In Mozambique, the so-called first wave is yet to arrive, but Roeder explains that the virus has already caused major disruption to DP World Maputo, not least because South Africa’s lockdowns have created issues for its transit business in and out of the country.

The CEO himself has had to embrace a degree of home working, with many other office-based staff working remotely as much as possible since April. A self-proclaimed extrovert, Roeder admits that he misses the human interaction that comes with being on site and is a firm believer in the productivity of a physical conversation versus a prolonged chain of emails.

However, even during these unprecedented times, DP World Maputo has been able to create positive outcomes.

“We’ve been able to concentrate internally and make this as easy as possible for our employees by being as flexible as possible,” Roeder says. “There has been more time for housekeeping and reviewing processes, seeing where we can introduce technology and digitisation to make ourselves more efficient for clients, for example in the area of customs.

“The COVID crisis has proven we are stronger together, and I am convinced now that we are in a better position to grow when the time permits. We’ve also shown that we can prepare and respond to emergency situations, so if something else happens we are ready to deal with it in a way that keeps our people safe.”

And this is very much the priority for the CEO in the immediate term – ensuring the safety of his colleagues in anticipation of any serious coronavirus outbreak in Mozambique.

Roeder tentatively expects to be back in the office and returning to some form of ‘new normality’ during the first quarter of 2021, a critical year for DP World Maputo as it looks to make progress on its various expansion goals in order to hit its 2022 targets.

Another priority for Roeder is to develop and implement a series of exciting programmes around the development of talent within the organisation.

The firm already cooperates with universities and is committed to upskilling local Mozambicans through various training schemes, but the CEO wants to diversify the workforce and open up opportunities for more women to join the industry.

“We’re really making an effort to get a more diverse group of people into the sector,” Roeder adds. “This will involve changing our recruitment strategy and driving a shift in mindset. The groundwork is being laid at the moment, and I am excited to see how the projects evolve.

“I have experience of similar initiatives from my previous years of working in warehousing, and if it can be successful there, then I am absolutely confident we can make it work here at DP World Maputo.”

Rebalancing the shipping workforce will be no easy task, however. According the 2017 Unctad Maritime Report, between two and three percent of the world’s entire maritime workforce are female.

But it is a challenge that Roeder is eagerly taking on, the encouragement of inclusion and diversity one of several key components which make up the DP World Maputo CSR programme.

Its goal? To embrace responsibility for the company’s actions, encourage a positive impact through its activities and enhance the prospects of communities.

Indeed, building a sustainable future for the area will also be dependent on the container terminal thriving in the future, Roeder concluding the conversation by restating his confidence about the prospects of the port and what DP World Maputo can offer to clients from all over the world.

“Maputo as a corridor has a tremendous future ahead of it,” he says. “We see ourselves playing a big part in linking certain areas in South Africa, Zimbabwe and Eswatini, and beyond that we’re looking at Zambia and the DRC.

“We’re ready to act as a secondary and primary route, and if we continue to put our customers at the forefront of our thinking, I am confident that Maputo will become the terminal of choice in the region.”