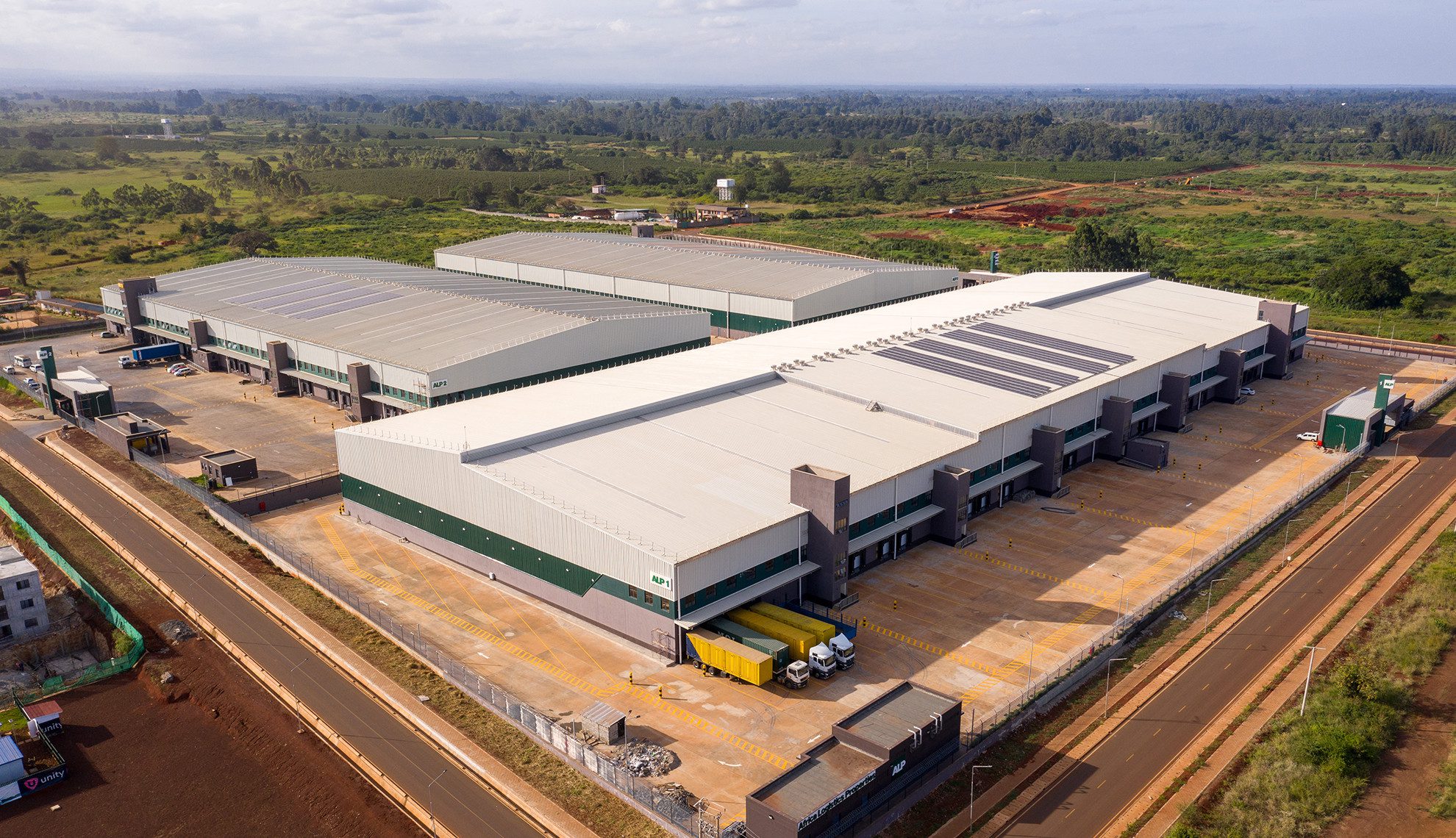 The Dawn of New Age Logistics

Africa Logistics Properties is at the forefront of an infrastructure revolution in Nairobi, its state-of-the-art warehouses to the north of the city already winning over local, regional and global tenants, with another hub on the way
Writer: Tom Wadlow  |  Project Manager: Lewis Bush
Nairobi – described as East Africa’s most cosmopolitan city and the beating industrial heart of Kenya.
Nestled in the central highlands around 480 kilometres from the port city of Mombasa, Nairobi is responsible for more than a fifth of national GDP and home to around 6.5 million people, or one in eight Kenyans.
Indeed, the city’s rise has been a remarkable one given its relatively young age. Established in the late 1890s as a colonial railway settlement, the ‘green city in the sun’ became Kenya’s capital in 1907 and enjoyed a period of turbocharged growth post-independence.
But there was a problem. Nairobi, when designed by British colonialists, was only ever supposed to house around 500,000 people, a fraction of the several million that reside here today.
“The infrastructure cannot accommodate the needs of the population and various real estate sub-sectors that are now in the city,” explains Dean Shillaw, Chief Commercial Officer at Africa Logistics Properties (ALP).
“Even prior to independence in 1963, Nairobi was growing at such a rapid rate that the infrastructure was left behind. Instead, things were being retrofitted and quick fixes were being applied – it’s like building a LEGO house with the wrong pieces.”
However, the picture is changing once again. Governing authorities have realised the boom in industrial activity must be supported by enormous infrastructure upgrades, and several game-changing developments are beginning to bear fruit.
These include the A2 highway which runs to Ethiopia, the A104 which heads northwest to Uganda, and the Chinese One Belt One Road-inspired LASPPET corridor, which is helping Nairobi to position itself as a regional transit hub.
Further still, the Standard Gauge Railway to Mombasa and special economic zones (SEZ) are creating business-friendly environments which are helping to lure more investment into the area. SEZ economic incentives include reduced corporation tax, no VAT, and preferential import and export duties, to name but a few.
Another key link in the infrastructure chain is modern, fit-for-purpose warehousing, the development of which is ALP’s raison d’être.
“Nairobi is crying out for quality warehousing,” Shillaw says. “Today there are 22.2 million square metres of industrial space under roof in Nairobi, but it is of substandard quality, badly designed and generally very poorly connected to major transport links and utilities.
“The recipe is ideal for a company like ALP to build warehouses, and that is what I love doing. We are, ultimately, helping to reduce the cost of day to day living and consumables by optimising one key link in the overall supply chain.”
Supported by international shareholders (such as the World Bank and Common Wealth Development Corporation) and adopting global best practices in warehousing design specifications, ALP is a specialist integrated property investment company that develops, acquires and owns class-A industrial and logistics properties in principal cities across Africa.
In Nairobi, the company has developed the first international class-A logistics warehousing park (ALP North) measuring 50,000 square metres within a SEZ and commenced construction of its second park at ALP West, just northwest of the city along the A104.
For Shillaw, the opportunity to get hands-on in the building of massive-scale infrastructure was too good an opportunity to pass up, the CCO joining in late 2019. He is a certified financial planner by education, but his passion for industry is what has directed his working career to this point in time.
“I used to go to the ports at Cape Town and Durban and just appreciate how bulk infrastructure worked,” Shillaw recalls.
“My old man showed me a MacSteel facility in Johannesburg when I was a teenager and I instantly fell in love – it was a steel fabricator site that was 110,000 square metres in size with 15 to 20 metres height clearance, and about 30 gantry cranes moving steel within the factory. I was in awe of it and my passion for industrial buildings just snowballed from there.”
Shillaw commenced his career at the internationally recognised real estate consultancy Knight Frank before moving to JT Ross Developments, a 120-year-old family run development company domiciled in Durban, South Africa, and a platform for his next move which looked like being London-bound. But the allure of working for Rendeavour on the 5,000-acre Tatu City development near Nairobi ended any plan to move continents, the CCO finally arriving at ALP after a three-month sabbatical exploring some of the largest infrastructure in Europe.

“Even prior to independence in 1963, Nairobi was growing at such a rapid rate that the infrastructure was left behind. Instead, things were being retrofitted and quick fixes were being applied – it’s like building a LEGO house with the wrong pieces”

A new era of warehousing
Shillaw’s job is to drive commercial growth in Sub-Saharan Africa with a core focus on developing ALP North and ALP West.
The former is a flagbearer for warehousing modernity in the region and has already achieved several major milestones, the 50,000 square metres of space now 75 percent occupied.
It lies 25 kilometres north of Nairobi’s CBD with close access to both the Thika superhighway (A2) and Eastern Bypass and has several access points, helping to mitigate traffic congestion by not relying on a single road in and out of the facility.
Inside, ALP North is fitted out to the highest-grade specifications. Its FM2 standard, anti-dust coated floor can handle loads up to five tonnes per square metre with a 12-metre operating height, its pallet density up to 140 to 200 percent greater than a conventional counterpart.
Warehouse access is also second to none, with automated sectional doors and dock levellers every 1,000 square metres, and 40-metre deep truck reticulation spaces.

“ALP North was recognised in 2018 as the best industrial development in Africa, and it was the first African building to achieve an EDGE Certification, which is a huge deal,” Shillaw adds.
“But what does being a green building actually mean? In terms of power we are saving 30 percent through solar and are generating 40 percent less wastewater. Water is the most valuable commodity in Africa so the fact we are saving and harvesting water is a big factor which defines true sustainability.”
On top of this, ALP North contains 200 LUX LED lighting, wall and roof insulation for stable indoor temperatures, and air handling units to ensure circulation is constant. The site also adheres to the highest fire safety and security standards.
The response to the development has been extremely encouraging, its success reflected by the signing of East Africa’s largest and second largest industrial lease agreements with Freight Forwarders Solutions and Twiga Foods respectively.
And Shillaw is determined to emulate this at ALP West, phase one of which, known as The Courtyard, being well on the way to completion by October this year.
“You could even argue that we overdid it on the specs with ALP North, because the barriers to entry are quite high,” the CCO adds. “It is not a cheap warehousing option, but the volumetric capability as a function of rent per square metre is unrivalled in Nairobi.
“With ALP West we want to appeal to smaller enterprises as well, so have built a mini industrial park to lower the barriers to entry without sacrificing on the A-grade quality fundamentals.
“This is what The Courtyard is all about, and will allow tenants to grow in a controlled, incubated way. It will serve as the feeder into the bulk of our next developments at ALP West, which has seven phases of construction in total and will contribute 100,000 square metres of space.”
While not as specialised as ALP North, Shillaw explains the mass market appeal of the new site, which is located two minutes from the Nairobi-Nakuru highway (A104) with several other link roads in construction around it.
Bulk earthworks for the second phase, which will deliver another 12,000 square metres, is about to commence, Shillaw outlining plans to deliver a phase approximately every year which will see completion of ALP West well before 2030.
A partner for the future
Beyond the bricks and mortar, another key differentiator for ALP is its partnership-based, personal approach to doing business.
The company is here for the long haul, able to stand as a long-term capital partner and develop genuine business to business relationships with its tenants, who can focus on their core operations in the knowledge that their assets are in the best possible warehouses.
“We have a small unit of highly skilled and hugely experienced individuals that I believe make up the best team of warehousing professionals in Sub-Saharan Africa,” Shillaw adds. “We operate like a family with an open-door policy and are good listeners, which is critical – there is no God-given hierarchy but at the same time everyone knows their roles, and we deliver on-time and on-budget.”
The CCO also reveals plans to expand the close-knit operation into new markets, citing the likes of Mozambique, Uganda and Ethiopia as potential new ventures for ALP.
“But the beauty of this is that it is not just ALP going out there and finding these sites,” he continues. “We have prospective tenants coming to us and saying where they will be setting up, and we can then approach them with a turnkey solution based on our build-to-suit (BTS) structure.
“This is allowing us to act as an incubator across Sub-Saharan Africa. We are speaking to multinational third-party logistics, cold-storage, pharmaceutical, retail and ecommerce providers who are asking whether we can build facilities for them in cities including Kampala and Addis Ababa, reversing that traditional mindset which has led to 85 percent of warehousing space in Kenya being owner occupied. Our partnerships enable a flexible approach to ownership, a structure which can change as time progresses.”
The possibilities, it seems, are almost endless. With the shortage of modern warehousing very much a regionwide issue, not just unique to Nairobi, ALP has proven its concept and is ready to act as an infrastructure catalyst on a larger scale.
It leaves Shillaw supremely optimistic about the future. Looking ahead, he concludes: “We know our solution works, and are managing to succeed and show it can be done in Africa.

“There are major benefits to be had from revolutionising warehousing in the region, which is a key component of the wider infrastructure renaissance that is underway.
“The more people and organisations we can convince to adopt our solutions, the wider the impact ALP will have and the greater the benefits which will ultimately be realised.”