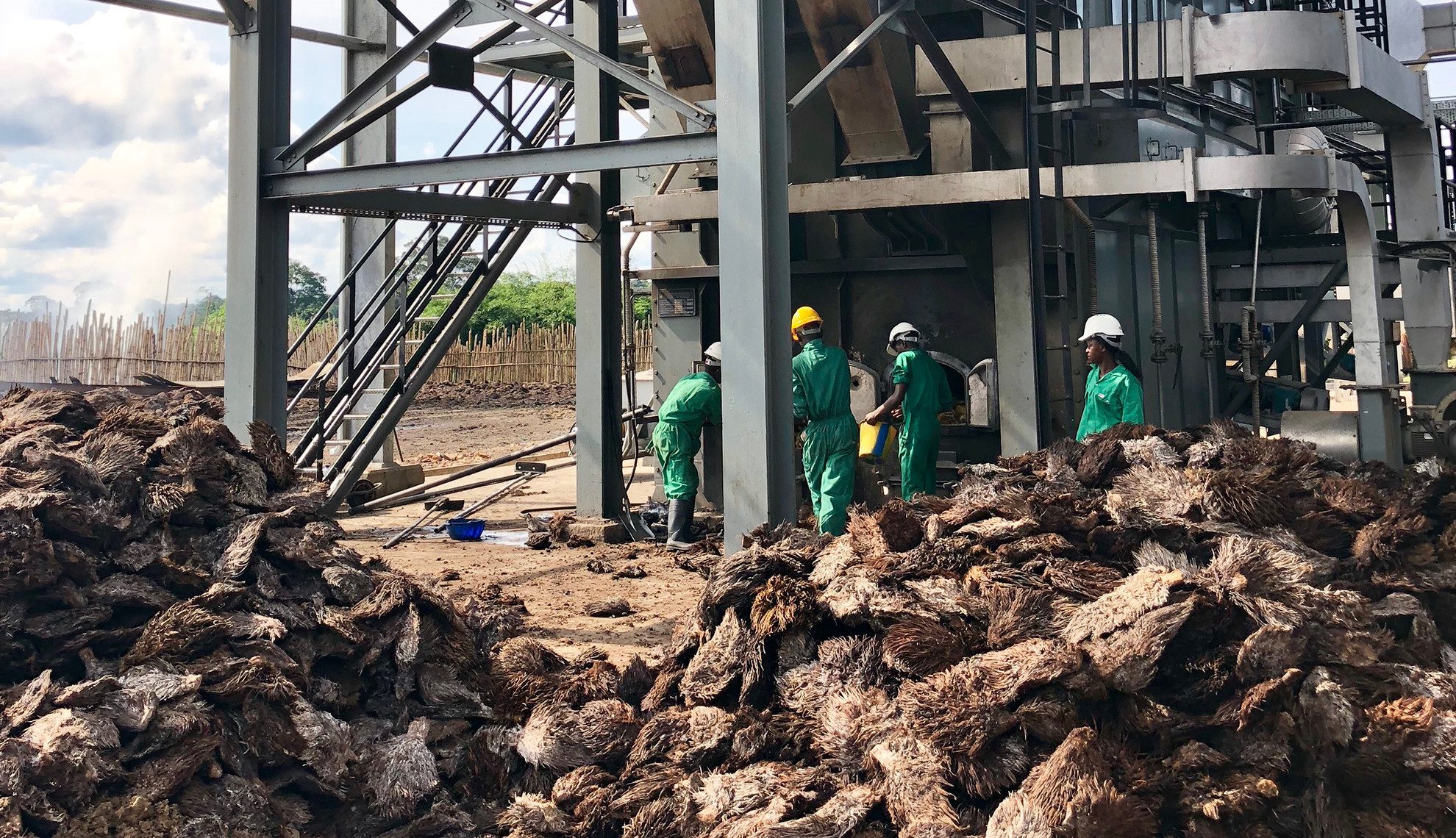 Socioeconomic Salvation in the DRC

Dismantling the negative stigma surrounding palm oil, Feronia is demonstrating how plantations can be the economic and social lifeblood of communities when they are run in the right way

When we acquired Plantations et Huileries du Congo Sa (PHC) in 2009, its future was in jeopardy having fallen into a state of severe disrepair after decades of disruption and a lack of care.

“Without substantial investment the business would have collapsed, with thousands of workers losing their jobs, tens of millions of dollars of wages not paid into the local economies and none of the social services which exist today would have survived.

“The business’s key revenue generating asset, its trees, were beyond the end of their productive life; the mills which turn fruit from the trees into the oil were mostly non-functional; none of the facilities we inherited had been maintained in 20 years and the surrounding roads had largely ceased to be passable.”

Tasked with replanting three million trees, replacing numerous mills, repairing hospitals, schools, roads, utilities infrastructure, and attracting the investment necessary to do so, the past decade has been a challenging one for Feronia to say the least.

The opening statements come from Xavier de Carniere, CEO and Executive Director of the company that claimed responsibility for revitalising PHC’s Lokutu, Yaligimba and Boteka palm oil plantations in the Democratic Republic of Congo.

He continues: “We were constrained on all fronts, be it financially or the difficult operating environment. The workforce, for example, who had stuck by the business despite an uncertain future, had been significantly neglected.

“We made a commitment to retain the entire workforce, despite initially being grossly overstaffed. We honoured all previous commitments from Unilever plc including retirement payments and unpaid wage claims, even including those relating to the war years.”

And yet, in the face of these hardships, the need for a monumental overhaul and boundless modernisation requirements at the palm oil plantations, Feronia and indeed de Carniere are beginning to bear the fruits of these labours, having created a business to be proud of.

Those employed on the plantations have seen their wages almost quadruple in the last 10 years, while production levels have risen from 3,000 tonnes of palm oil in 2010 to 40,000 tonnes in 2018, with the expectation that production will continue to grow at 30 percent annually for a little while longer.

“The trees are now in the ground, fertiliser has been applied, and we are just starting to see the payback of our efforts which we believe will be exponential in the near future,” de Carniere states. “We’re anticipating Feronia to soon become an overnight success, owed to the hard work of the past decade.”

Upholding the overlooked
Joining the project five years ago, the inspiration for de Carniere to get involved was simple. “I saw an opportunity to help write a success story in a country which desperately needs local employment,” he states.

Helpfully, this vision was shared by a number of development finance investors (DFIs) and other lenders who have backed Feronia, the company working closely with them and the government to ensure that best practices and sustainability became its central pillars, committed to ensuring that the business was being rebuilt in the right way.

As such, Feronia has become a exemplary societal and economic figurehead in the DRC, paying several million dollars each year in various taxes and on average 11 million dollars annually in remuneration costs to 4,000-plus employees and 8,000-plus external contractors, despite having been a loss-making enterprise since its inception in 2009.

“We also partner with local and international NGOs to help provide alternative sources of revenue to local people,” de Carniere adds. “This includes helping develop fish farms, cocoa plantations, rice projects and other meaningful enterprises. The ultimate aim is to use our presence to benefit both our employees and wider populations through these initiatives and our own work, all of which will help alleviate poverty in one of the poorest countries in the world.”

Sustainability is a reoccurring theme in many of the company’s social upliftment practices, opting for a more innovative, lasting approach alongside its traditional social investment programmes.

De Carniere explains: “We favour a co-development approach in order to give communities ownership and responsibility, moving away from any sense of paternalism which was historically the approach in many plantation businesses.

“We estimate that 150,000 people live on or directly around our three PHC estates, with little alternative source of formal employment than us. It is therefore essential that we are a catalyst for development by helping stimulate projects creating opportunities so that everyone can benefit. That includes bringing modern and internationally recognised approaches to governance to a part of the world which has been largely overlooked in this regard, until now.”

An enterprise of opportunity
Equally, the true extent of the long-term commercial opportunities that were presented to Feronia prior to its acquisitions of PHC were easy to see, despite the time, money and work that it has taken to get the renewed business to a point of profitability.

Not only is the DRC the largest Francophone country in Africa, it has a young, growing population currently comprised of 85 million inhabitants and is home to 80 million hectares of arable land. The World Bank has even highlighted it as a country that has the potential to become one of the richest nations on the continent and a key driver of pan-African growth.

This in mind, as a major producer of crude palm oil, part of the staple and traditional diet of the Congolese, Feronia will undoubtedly come to play a major role in reducing the country’s reliance on imports and enhance food security and quality.

“Operating in a country with a rising population, and being the incumbent and dominant producer of a primary, staple cooking ingredient in a landlocked area that is the size of Western Europe, we find ourselves with an almost captive customer base which is expected to reach 200 million people by 2050,” states de Carniere.

“This makes us, by far, the palm oil business in Africa with the highest growth potential.”

Wise to these vast prospects that are gradually coming to fruition, Feronia continues to actively invest in its sites, evident in the firm’s current endeavours that include the rebuilding of its Lokumete Mill from scratch. Once operational, it will be the most modern and technologically advanced palm oil mill across the entirety of Africa.

“It is a massive investment in a very remote place,” de Carniere reveals. “But we take great pride in our ability to deliver such a technological miracle in the middle of nowhere, and it is only made possible thanks to our alchemist-magician partners and suppliers, and a lot of hard work.

“Our employees are of course the backbone of the company, but our partners and suppliers are the blood and the muscles – they are critical in helping us achieve our targets. We are quite fortunate to have a number of partners and suppliers who have worked with my team and myself in the past, who trust us and have demonstrated incredible levels of competence and patience as we have progressed. We owe them a lot of thanks.”

Changing the state of play
With the support of its partners, investors and the communities combined, Feronia is making the final few stops on the road to profitability, a goal that has been in the works from day one.

“Palm oil production is mostly a fixed cost business, so volume drives sales,” says de Carniere. “And we are now at a level which will mechanically make us profitable.”

This is not Feronia’s single priority for the coming year, however. The organisation is additionally striving to consolidate its position and reinforce its license to operate by furthering its win-win relationships with the DRC’s communities.

Thirdly, de Carniere reveals that its sights are also set on expanding the business through downstream integration and lateral acquisitions, all while maintaining its principles of zero deforestation and responsible and sustainable practices.

“There are numerous derelict plantations in the DRC, awaiting to be rehabilitated, without having to cut down forests or impact the environment, which can help reduce the country’s reliance on imports and boost the local employment and economy,” he reiterates. “Once we have proven our showcase with PHC, funding will no longer be an issue, and this will be the next step.”

These three ambitions sit against a backdrop of optimism, owed to the substantial commercial opportunity awaiting Feronia over the coming years and the role that the company will undoubtedly play in bolstering national food security.

It is this that the Chief Executive points to in his concluding statements.

“The vegetable fat consumption per capita in DRC is probably the lowest in Africa, at just four kilograms per person per annum,” he states. “The African average is three times that, hence it is virtually impossible to reduce it further without causing an unprecedented national humanitarian crisis of malnutrition.

“Consumption per capita can either remain where it is or increase, the latter being our goal. Combine this with the pending population growth of the coming decades, and you can certainly see the upside potential.

“Palm oil is probably one of the best ways of transferring wealth to where it is most direly needed – it can create a better, more balanced world, where people in developing countries have a future. My team and myself are proud to help build that future.”