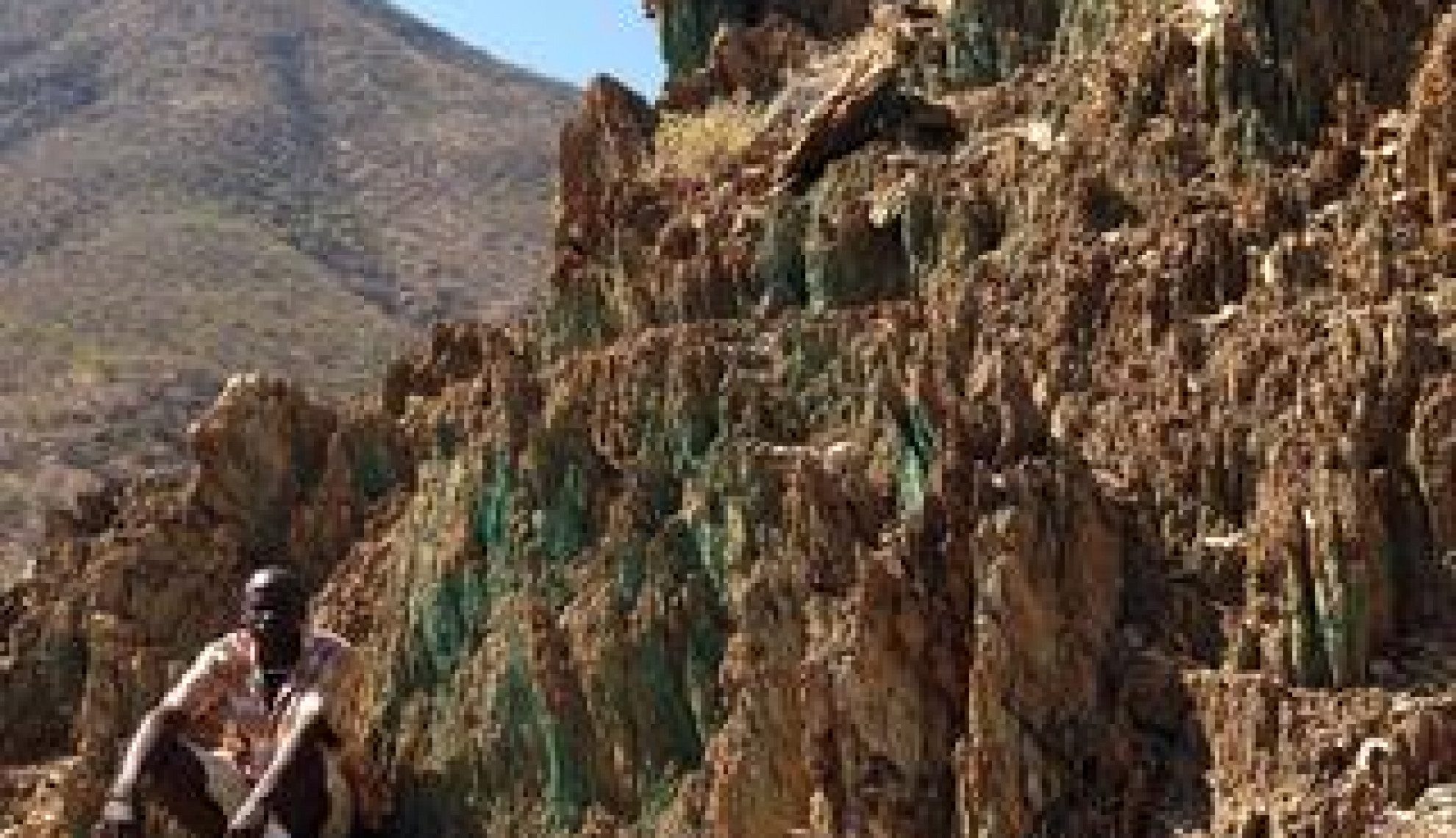 Out in the far north of Namibia near the country’s border with Angola is an outcrop of rock that glistens green when the sun catches it. This outcrop contains copper, with the green lustre caused by the mineral malachite embedded in the rock and part of its wonder is that it has never been noticed before.

To Brandon Munro, Managing Director of African Mining Capital, Joint Venture partner of Bannon Ltd, an emerging mineral resources exploration company which holds the licence for the area containing the outcrop and its surrounds, this discovery, named Okanihova, underlines just how exciting exploratory work in northern Namibia is.

“We are in a genuinely virgin exploration territory and that always excites geologists because if something so big and green can go unnoticed, then really anything could be possible,” he says.

This is the Kaoko Project in northern Namibia, Bannon’s Joint Venture with African Mining Capital, a company founded by Munro and his team.

Apart from the Okanihova find, Bannon has also been quietly creating big news in the geological world in Namibia with another target, its “Dolomite Ore Formation” or simply DOF. While Munro knows intensive verification has to take place before the company can ‘shout the news from the rooftops’, the DOF and its accompanying geological data indicate that Bannon might have discovered evidence finally linking Namibia’s northern Kaoko Copper Belt to Central Africa’s/Zambia’s legendary Copper Belt.

“Cobalt – a signature feature of the Central African Copper Belt – had never been found alongside copper in Namibia. This was a deficiency in the argument that Namibia’s Kaoko Copper Belt is a direct analogue for the Zambian or DRC Copper Belt. Bannon’s discovery of cobalt in the DOF has put that argument beyond doubt,” Munro says. “If – and it is still a big if – the theory is verified by an economic discovery, the news will electrify the Namibian mining and geological worlds and Bannon will be sitting pretty as its licence covers about 85 percent of the northern Kaoko Copper Belt.”

But landing the six exploration licences which cover a contiguous area of 3722sq km area in northern Namibia was not merely lucky. The company targeted the area because of its geological team’s interest in the academic work linking the area with the massive potential of Zambia or the DRC. So it is fitting that it was Bannon Chief Geologist, Dr Rainer Ellmies who formally identified the copper outcrop at Okanihova after hiking at least 10km into the mountainous terrain accompanied by local Himba tribespeople.

This ground exploration came after the team identified a number of interesting geological targets in their geophysical work. Then it became a case of pushing deeper into the unexplored area.

Ellmies texted Munro some 1000km away- at least half the area has some form of mobile coverage with the other half relying on satellite phones and told him he could ‘put a bottle of champagne in the fridge’ before filming the awe-inspiring green copper outcrop.

Verification will take a long time but for starters Bannon has engaged local villagers to build a track to the site and will be bringing in contractors with a specialised, small diamond rig to start drilling and get a feel for how far mineralisation extends below the surface and to confirm how consistent it is through the rock.

“We will also be carrying out more extensive regional work to see if there is repetition of the feature because if there is a chance that it’s not the only big, green hill in the area, it would be fantastic news for us and everyone in the region,” says Munro.

So far the company has carried out an aerial hyper spectral survey, which identifies the mineral composition of the rock or sand through the unique light spectrums each emits, over its whole licence area. They added this information to that garnered by aerial magnetic and radiometric surveys carried out over the whole country by the Namibian government.

Bannon recently completed an even more detailed airborne survey of about 10 percent of its licence area and currently they have identified three different mineralisation styles from work done on the ground and want to learn if they can see them in the airborne geophysics. If they do show up in the geophysical analysis, Bannon can use further airborne geophysics to quickly identify other similar mineralisation over this huge area.

And they need to drill the Okanihova outcrop before they can start “calling it an ore body or a deposit”. While they are hoping to see this start by the end of August it depends on the availability of rigs so Bannon has informed the Stock Market (the company’s listed on the Australian Stock Exchange) that the drilling will commence in the September Quarter.

Of its two other identified areas so far, Bannon is pleased with its progress in Otuziru, where its recent drilling has a zinc/lead/silver deposit and resembles other regional targets. Munro feels the company will see Otuziru type targets repeated in the region many times. “Similar to the Mississippi Valley which is a zinc-led province in the States where you just have a whole series of repeated, small ore bodies,” he says.

On the other hand, drilling at Chirumbu, “a little hill that sticks out above sandy valleys in the remarkable Opuwo Lineament”, wasn’t successful as a target but the company has learnt a “huge amount about the geology of the area” and confirmed that there is a big hydrothermal system, which “can be a prerequisite for copper or gold deposits”. So with the aid of recent geophysics, Bannon will analyse targets close to the Chirumbu hill.

For a “small” company, making two greenfields discoveries in two years and being “well on its way to a third” at Okanihova is phenomenal. And Munro is delighted with the commodity diversification within their licence area. Ironically it’s the region’s troubled history that has allowed these kinds of discoveries in such a developed country. As Munro says, “you would imagine you have to be in faraway jungles,” to make such greenfields discoveries. However, Namibia’s far north remained relatively underexplored because of the conflict on the Namibian/Angolan border that meant for 20 to 30 years no-one could explore there.

Ironically, the South African Defence Force, which used the area as a launching pad, built extensive tracks, airstrips and infrastructure there. Post independence, further investments were made in the road network and power.

So it offers “an extremely unusual combination of unexplored area plus good infrastructure.” Not only that but there is a hydropower station within 100km and one of Namibia’s only two permanent rivers within 20km of Bannon’s licensed area.

Bannon’s luck or foresight didn’t end there – both Anglo Base Metals and Rio Tinto (RTZ as they were known) were in the area shortly after Namibian Independence but both withdrew thanks to internal company decisions. Munro says that’s because the biggest companies have got “too big to make discoveries” and the current economic food chain means that they will feed off medium sized companies who “eat small fish like us”.

However Bannon Ltd, he says, has the resources to develop the licence area themselves – depending on what exactly they have found.

While that would raise growth issues for Bannon’s small pool of undiluted and dedicated’ talent, Munro’s not facing an upsizing dilemma yet. “We believe that we have had some awesome success but the level of verification required before you can start celebrating means we are about six months away from being able to call ourselves a huge success to the outside world,” he says.