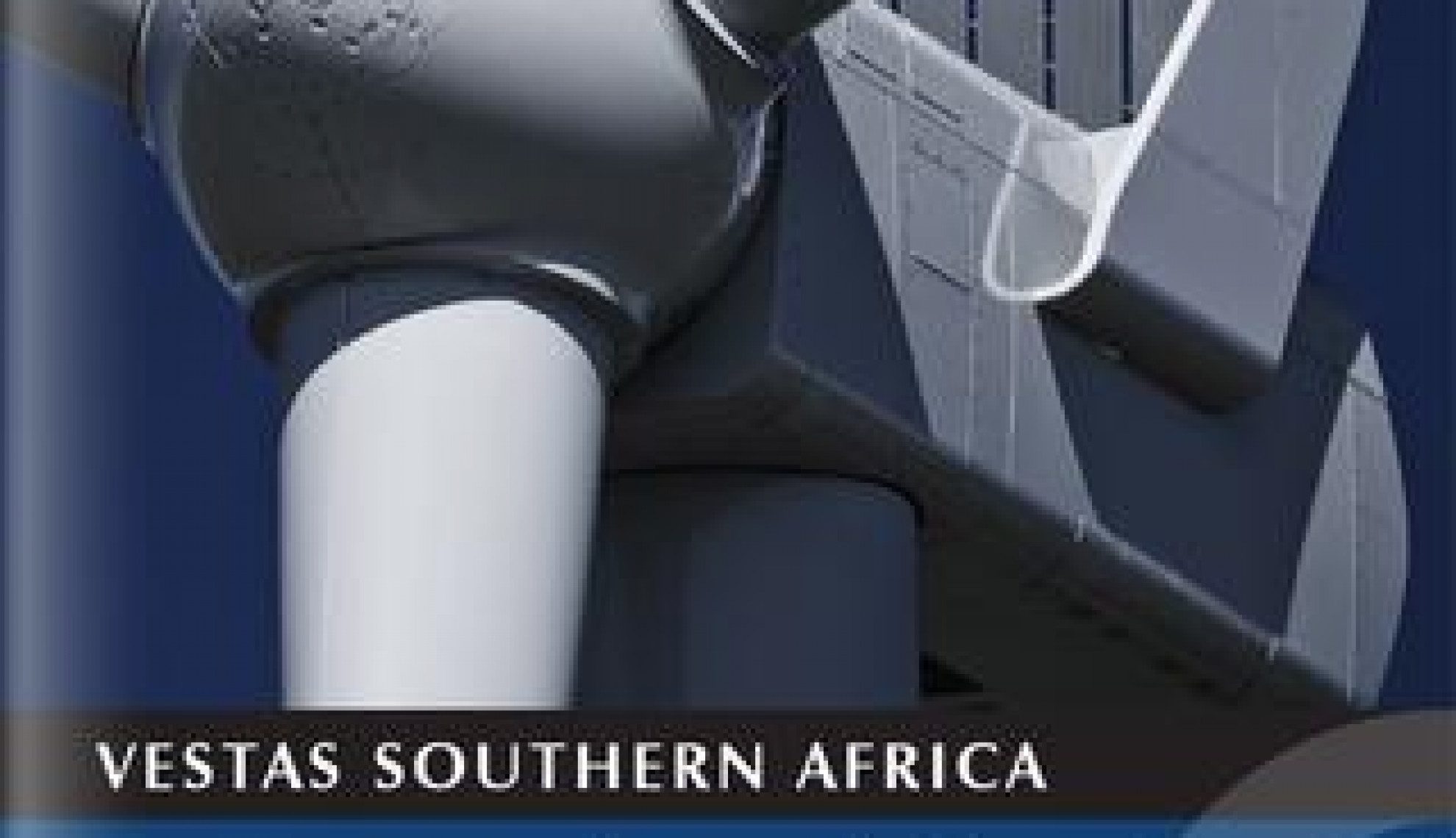 Rapidly changing renewable energy support schemes in Africa are not only shaping the continent’s future sources of electricity, but they are also a source for local jobs and economic empowerment. Given that an increasing number of Sub-Saharan African countries are establishing their own policy frameworks, there are shared continent-wide goals to both reduce CO2 emissions and improve access to electricity infrastructure through least cost generation options such as renewable energy.

Vestas has been present in South Africa for more than 10 years and officially established its local entity, Vestas Southern Africa in 2010 – the same year that the REIPPP Programme began. The Company has focused on expanding its presence across Sub-Saharan Africa in a bid to continue steady growth on the continent and share its significant knowledge and understanding of the African business landscape, and the application of renewable energy.

“We have actively taken part in the bidding process in rounds 1-4 and established new divisions that cover East Africa and Sub-Saharan Africa. Taking into account round 4 of the Department of Energy’s (DOE) REIPPPP, Vestas has won the supply of turbines to 10 utility scale wind power plants; five of which are fully installed, two of which have commercial operation dates and the others are in the construction phase,” highlights James White, Vestas South Africa’s Country Manager.

Insofar, Vestas is the only manufacturer to win at each round of bidding and subsequently, the Company has witnessed steady internal growth in terms of staff numbers, which now stands at approximately 45 members who work across key functions such as sales, construction and service.

The REIPPPP is a criteria-based bidding approach spanning the finance, construction, operation and maintenance of renewable energy generation facilities in South Africa, with 5,243MW of successful projects to date and 1,827MW of this already connected to the grid. With this success in mind, the Minister of Energy has sent the request to Nersa (National Energy Regulator of South Africa) for the permission to procure a further 6,800MW of renewable energy power generation from IPPs (Independent Power Producers).

So far, four of the five proposed bidding rounds have taken place. This competitive bidding process was chosen to help transition the South African economy from its current coal-based energy system to one that is composed of 17,800MW of renewables by 2030.

“While requirements have been tough, this has been a fantastic programme with clear guidelines that keep the process simple,” comments White.

For Vestas and others participating in the process, the Programme is satisfying the local demand for jobs; an ongoing challenge in both South Africa and Africa more broadly.

“There has been great synergy between IPPs and rural communities without a reliable energy supply. By targeting South Africa’s rural areas for example, where it is windy and sparsely populated, we can increase electricity coverage geographically and provide meaningful careers to those who live closest to the facilities.  This is an opportunity that hasn’t even begun to be fully realised and has great potential going forward,” he further adds.

Over the past decade, renewable technologies on the African continent have matured, becoming more reliable and cost-competitive with fossil fuels. Although rapidly decreasing tariffs are affecting OEMs like Vestas, and IPPs, renewables are now cost-competitive with coal and have reached grid parity in South Africa as White explains: “We can now generate power at a levelised cost of electricity that is less than or equal to the price of purchasing power from the electricity grid.

“However, with the average wind tariffs decreasing by 42 percent over rounds 1-4, it vital for Vestas to find ways to differentiate itself both as a company and in terms of its high quality finished product at a cost-competitive price to maintain a good portion of the market.”

Furthermore, given the overwhelming demand from the private sector to develop new projects, the demand on the limited number of substations in South Africa to evacuate power to the grid has come under close scrutiny. Both private and public stakeholders require careful dialogue to manage the strained power capacities which present a long-term challenge. The more allocated energy, the more pressure this will place on the national grid, and Eskom will need to increase power infrastructures to cater for demand.

In Kenya, the 300MW Vestas East Africa site at Lake Turkana poses a different set of challenges as White elaborates: “Lake Turkana project is in the middle of a very sparse area, around 1300 kilometres from the Port of Mombasa, and this means there will be a high level of infrastructure complexity involved to complete the project due to poor quality transport links.

“We chose this location not for the challenges it brings, but due to the incredible wind resource here, which has the capacity to deliver the lowest cost of energy for any power source in Kenya; shattering the myth that renewable energy is expensive.”

When completing a project such as this, it is crucial to partner with reliable local suppliers and look for suitable roads. “With one turbine consisting of up to eight heavy loads, delivering 365 wind turbines to Lake Turkana will be a world-leading example in logistics.

“This challenge stretches across the landlocked countries we operate in, such as Botswana and Ethiopia, therefore, Vestas always try to get as close to the site as possible to minimise logistical challenges,” he continues.

Advantageously, Vestas has been able to leverage its global reputation as a leader in wind turbine technology to secure tenders across the continent, as well as a fully-qualified team of staff. “The market is still relatively small in Africa, which means we can easily identify our strategic partners and demonstrate our local competencies and in depth grasp of the technology.

“Vestas has spent a considerable amount of time building its South African profile by attending conferences and events, to really communicate to our stakeholders that although we are a global company, we have a local presence. This has been a key element to our success,” adds White.

In the long-term, he hopes that Vestas South Africa will champion local content, including increasing locally manufactured turbine parts: “The majority of Vestas’ parts are manufactured and partially-assembled before they reach the continent via the closest local port depending on project location. Given the focus on driving the economy through employment, we should see that by round 5 of bidding, the ‘Economic Development Criteria’ compliance will have increased.”

In response to the latest energy allocations announced by the Minister of Energy for the upcoming rounds – 1800MW of renewable energy in 2015, with the tender released in June and preferred bidders announced in the third quarter of 2015, and a further 6300MW to be procured over the long term starting with round 5 to be released in Q2 2016 – Vestas will work towards increasing local content in line with the government’s expectations and prudent business practice.

Additionally, the Company will continue to actively work with the Department of Trade and Industry to aid job creation.

“We have been impressed by the high level of skilled South African workers and encourage others to add to the local skill pool,” says White. “In recent years, Vestas South Africa has invested in localising its training so it can organically train new staff as the Company continues to grow. Our level 4 B-BBEEE compliance is something that differentiates us from the competition and is something we utilise to show our commitment locally.”

The most notable form of internal training is the Vestas Technician Pipeline training model, which takes trainees through a formalised and recognised training programme to become specialised turbine engineers.

Sub-Saharan wind production is booming, with East Africa rapidly emerging as the latest renewable hotspot. With a combined 813MW and 335MW of power generated by Vestas across South Africa and Kenya at present, the Company is excited to be a part of the future renewable supply on the continent. “These long-term contracts give us commitment to the continent and are a springboard from which to expand our presence going forward.

“In South Africa, we are particularly excited for the extra allocations outlined recently by the Minister of Energy. In the meantime, our aim now is to consolidate and continuously refine our offerings before being first-movers into many of Africa’s nation markets,” summarises White.

Through a localisation strategy and utilising its in-depth indigenous expertise of the African renewables market, Vestas is actively exploring projects across a wider geographic spectrum including Namibia, Tanzania, Botswana, Ethiopia and Mauritius.

“Over the next five years, we foresee rapid developments when it comes to wind farms across Africa,” concludes White.