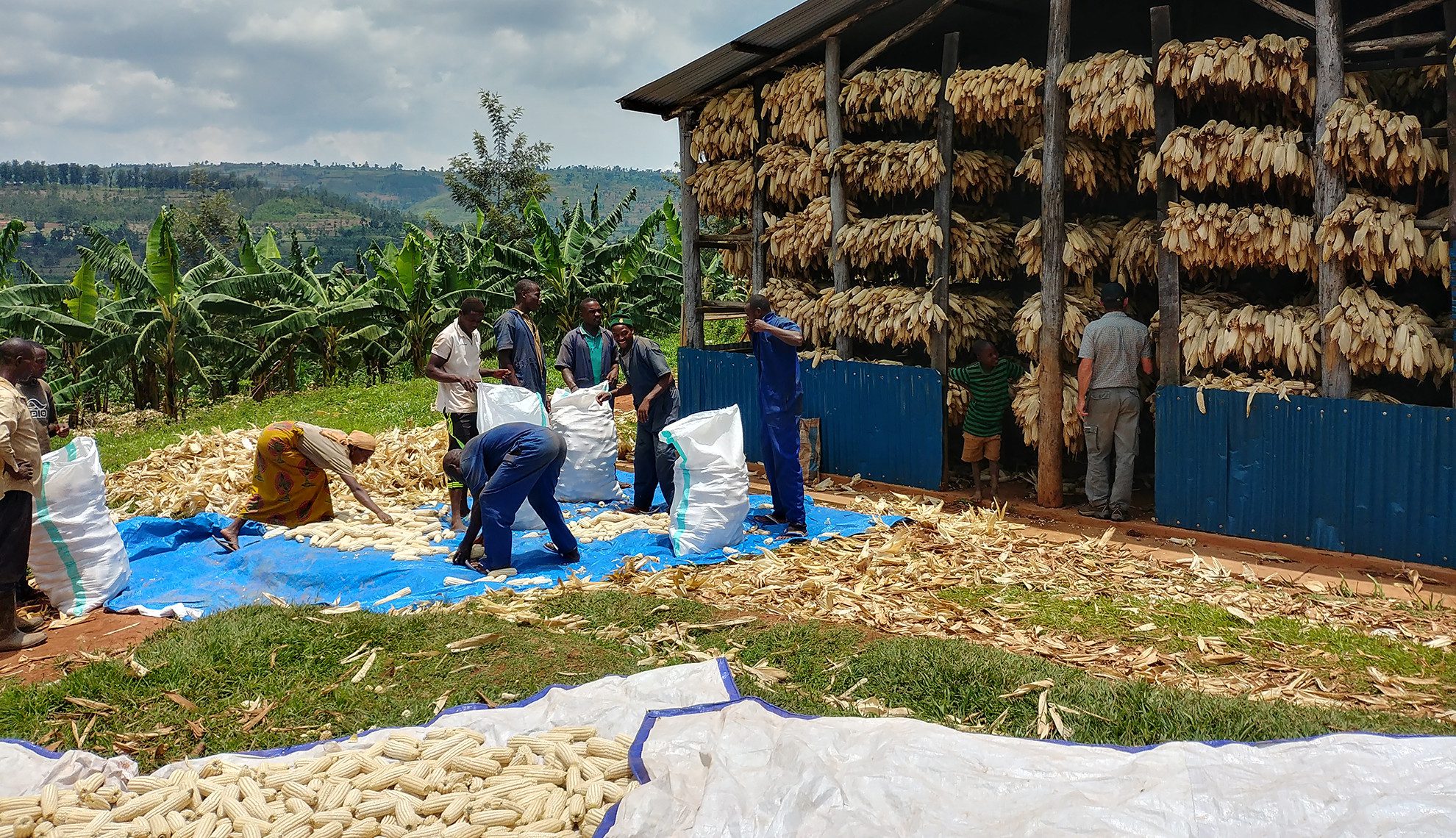 AIF produces high-quality nutritious foods made from maize grown by over 35,000 Rwandan farmers that treat and prevent malnutrition across East Africa

Like a lot of people, I was climbing the corporate ladder and ended up working as the Vice President of Marketing for a $2 billion travel technology company in the UK. However, I kept asking myself, what am I really doing here? Where’s the value that’s created for society by what I’m doing?

“A lot of the work conducted in high-end economies is often focused on marginal optimisations of customer value, yet at the same time, there’s billions of people in the world who are struggling with the very basics.

“I decided I wanted to get into something that would make more of a meaningful impact and quickly became passionate about the agri-foods space, looking at how the global food system works, or doesn’t in many cases.

“I enjoy business, don’t get me wrong – the strategic, the day to day, the commercial is all fascinating to me. But each of these elements become particularly rewarding when they’re applied to causes in Africa, where there’s a lot to be done.”

For Amar Ali, Africa Improved Foods (AIF) provided the perfect platform to use his skills and make a tangible difference.

An organisation set up with the single goal of helping to address malnutrition across East Africa with food made in Africa, AIF has been operating out of a state-of-the-art facility in Kigali, Rwanda for close to three years, helping to raise the overall quality of food in a region where 36 percent of all children under five are stunted.

“State-of-the-art has almost become a cliché that people use a lot, but this facility truly is,” Ali, now CEO of AIF, states oldly.

“We’ve had a lot of interest from visitors, dignitaries, multinationals, and they’ll all agree that it’s of the highest international standard. And there’s a reason for that. A lot of the food consumed by people here on a daily basis is unsafe, even harmful, and that’s in part due to a lack of hygiene, safety and other issues in the supply chain. Our facility is helping to change that.”

Indeed, the direct impact that AIF’s processing facility is having on the value chain is not to be underestimated. Yet it is not the only way in which the company is helping to address the systemic problem of malnutrition.

“Of course, receiving recognition is nice for us, but the bigger point to make is that it helps to show what can and should be done. It shows how a country like Rwanda can become a shining light for not only the region, but equally the world – and why shouldn’t it?”

Invigorating social inspiration in this sense constitutes one part of the firm’s wider overall impact, an impact that has recently been measured in dollar-terms by the University of Chicago.

Evaluating AIF’s contribution to local economic development in Rwanda, developing the local food system and its value chain, and its efforts to combat malnutrition, the report concluded that the firm is set to create just shy of $1 billion in social benefit by 2031.

“It’s a huge number, but it shouldn’t be much of a surprise,” Ali states.

“The objective of our nutritional programmes is to bring down the stunting rates in Rwanda from 38 percent to 32 percent. This doesn’t sound like a lot, but when you consider the cost of malnutrition to a country’s economy derived from increased healthcare costs, reduced education potential, lower productivity, etc., it’s massive.”

It is at this point that Prosper Ndayiragije, Rwanda’s Country Director for AIF, enters the conversation, highlighting the company’s work with 35,000 smallholder farmers across the country as key to this $1 billion domino effect.

“Sourcing maize locally is a massive part of what we’re trying to achieve here,” he reveals. “Working with smallholder farmers, we’re able to support and create jobs, provide knowledge transfer and offer an abundance of benefits beyond just being a food and beverage company.”

With this being so crucial to the company’s vision, AIF has even altered its processes to ensure it can help smallholders maintain quality and secure consistent, reliable business from AIF.

“In the beginning, we were sometimes forced to reject grains that were coming in because of a lack of quality,” Ndayiragije continues. “But the smallholders didn’t actually have the means of adhering to our standards.

“To solve this, we began to work with them on the ground, providing equipment and training, and altered our buying processes, instead purchasing cobs and extracting the maize by undertaking the post-harvest handling ourselves.”

There are downsides to these methods, of course, the company having incurred extra costs to ensure that its vision and purpose remain strictly on track. Yet over the coming years, AIF is anticipating that smallholders will begin to adopt best practices to increase their own yields and margins.

“We’re focused on the long-term, on socioeconomic stability,” Ndayiragije affirms.

Looking ahead, the firm’s short-term objectives, such as promoting its Nootri-branded products, will contribute to achieving these goals.

“It’s our plan to look at how these can be marketed to ensure that they are consumed and have their desired impact,” Ndayiragije states.

“We understand that it may take time for consumers to understand that our products offer a solution to malnutrition, but that is why we’ll be taking steps to help people differentiate between nutritious products and unhealthy products.”

The CEO echoes Ndayiragije’s general sense of optimism, highlighting the fact that Rwanda is currently moving at a very fast pace.

“Yes, it’s a relatively small economy right now, but it’s adjacent to many major countries, is relatively business-friendly and corruption-free, and has a progressive government at its helm,” Ali reveals. “Volkswagen just established a footprint here, for example.

“What I’m particularly optimistic about, however, is Rwanda becoming known as a centre for quality as higher standards become the expectation. I’m proud that we’re helping to catalyse this in the food industry more specifically, and we’re already beginning to see it spread across Rwanda and indeed Uganda and Kenya to some extent.”

At the same time, however, the CEO is quick to iterate that mindsets need to change if East Africa is to thrive in the long term.

He passionately concludes: “The importance of local sourcing has gone off the radar slightly as an issue, but it shouldn’t. Agriculture is by far the biggest employer of people, and we also know that 50,000 jobs need to be created in Africa every day for the next 35 years just to absorb the rapid population growth.

“In that context, it seems perverse that development organisations would import food into East Africa from OECD countries for humanitarian purposes. While in some cases, it might cost a bit more to buy from local farmers here, not doing so creates a false economy.

“It’s a systemic problem and one that needs to be addressed, not only to combat malnutrition but equally to proactively encourage self-sufficiency across Africa.”