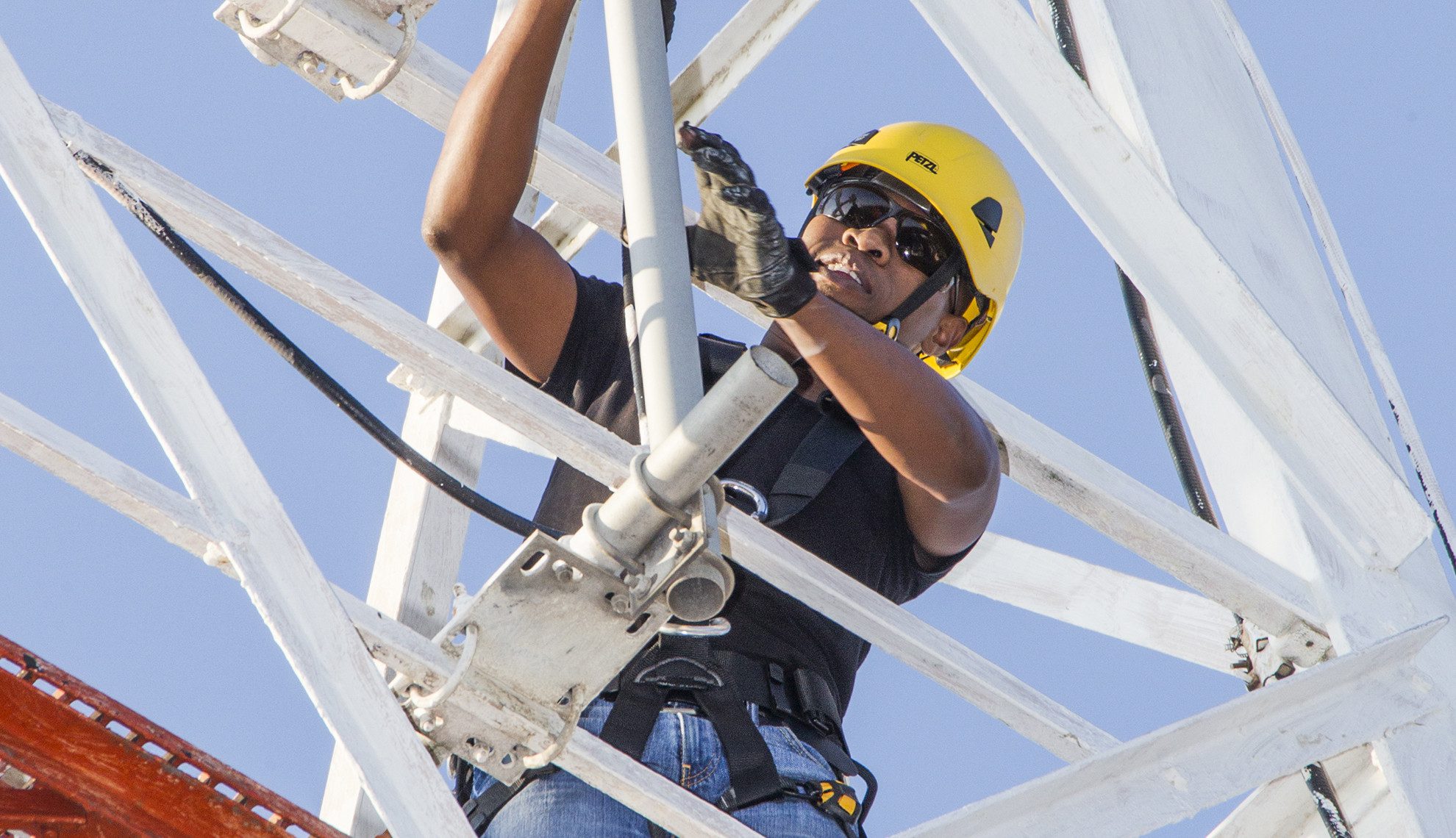 I became interested in telecommunications as a result of my interest in the mechanics of how radio works; how it is that you can have people communicating across distances as if they are close to each other.

“I am from a rural background – this curiosity was triggered at a time when I was shepherding my father’s sheep in the Eastern Cape village of Cingco. I began asking questions, but no one could answer them, so I took an interest in scientific studies. The rest is history!”

Both inquisitive of and inspired by the ever-evolving capabilities of technology, Mlami Booi’s passion for telecommunications remains as pronounced today as it was 30 years ago.

An entrepreneur at heart, he spent many years as an engineer, regulator and businessman after graduating from the University of Cape Town with a Master of Science degree in electrical engineering, now standing as the CEO of SENTECH SOC, driving digital innovation in the public sector.

“Connectivity and the accessibility of internet services are more important than ever before,” he declares. “Telecommunications and infrastructure are some of the cornerstones of this digital economy, pillars that the economic development of Africa will be dependent upon.

“It’s SENTECH’s mission to be a crucial part of this evolution, operating as an industry spearhead in delivering digital content. The role of our organisation in driving connectivity to facilitate the fourth industrial revolution is something we are very much proud of.”

27 years in the making

The organisation itself began life in 1992, initially having been formed as the subsidiary of the South African Broadcasting Corporation (SABC) responsible for delivering its signal distribution services.

Four years on and this role has expanded, SENTECH having transitioned into a common carrier of such services for licensed television and radio broadcasters – a market it has catered to ever since.

“Being a value driven company, we pride ourselves on being a well-run, profitable and responsible state-owned corporation, having received clean audit opinion for seven years in a row,” states Booi.

Headquartered in Radiokop, Johannesburg in the Gauteng Province of South Africa, the entity equally takes satisfaction from its self-sufficiency in delivering products and solutions to its customers.

This is not to say that SENTECH’s doors are closed when it comes to collaboration, however – the company is readily upholding supplier and partner relationships regarding demand management, acquisition management, contracts and management and logistics.

Booi explains: “While SENTECH is independent in delivering most customer products and solutions, some reliance is placed on our credible suppliers and partners when tapping into new business frontiers, especially in areas where there is inadequate internal capacity. We view these relationships as critical to the success of our business.

“We have adopted a strategic approach to supplier and partner relationship management, with an aim to develop mutual awareness of what is happening in the market in order to stay ahead of competitors, while continually communicating to provide timeous resolution of issues and ensure business continuity.

“Some of the benefits that accrue from these partnerships include negotiated prices, timely delivery of goods and services at the right quality and customer satisfaction.”

Perhaps the most crucial of this multitude of tangible benefits has been SENTECH’s ability to diversify and remain proactive, something that is integral to the organisation in the face of an ever-changing, fast-moving, technology-orientated landscape.

Such agility has seen SENTECH accumulate a unique skillset, alongside industry leading infrastructure and capabilities, that translates into a breadth of content and multimedia services, managed infrastructure services and connectivity services, evidenced by its expansions into the broadband network space.

“We are an ICT company aiming to deliver content through different electronic media platforms, and the provision of broadband connectivity, particularly to rural and unserved communities,” Booi explains.

“Simply put, SENTECH has rolled out a digital television broadcasting network nationally,” Booi continues. “The migration will improve the quality of services provided to the public, while also using spectrum resources more efficiently. In turn, this will enable the eventual release of spectrum to international mobile telecommunications (IMT) services and improve delivery.

“It is ready for consumption and will be rolled out as soon as people across the country have access to digital reception equipment.”

Much like the aforementioned broadband connectivity efforts, SENTECH hopes that rural communities will be the biggest beneficiaries of this migration. These services are not the be-all and end-all of corporate social investment for the organisation, however.

Indeed, the company also takes an active role in more traditional CSR endeavours, supporting underprivileged communities in the field of education and health via initiatives such as its school’s connectivity programme.

“We have connected 52 schools to date,” Booi reveals, “and have established and funded a scheme to provide extra maths and science classes to 300 learners from Grades 10 to 12.”

In addition, SENTECH’s own staff are often on the receiving end of the merits accompanied by this responsible approach, the enterprise offering internal training and access to external resources to ensure its team remains competitive globally.

“Our training efforts allow us to not only prepare the country for next-generation technologies, but equally prepare our own workforce for the fourth industrial revolution,” Booi adds.

The latter point from the Chief Executive is pivotal in the eyes of SENTECH, the broadcasting and connectivity specialist continuously investing into the latest technologies in the aim of optimising and improving processes and service delivery.

“SENTECH drives a culture comprised of ethical leadership and innovation,” Booi states. “Our staff are champions of good governance and keep our company at the forefront of delivering reliable services to our customers.

“As such, currently there is much focus on delivering value added services through our infrastructure, adapting content delivery to changing consumer behaviour and unlocking niche opportunities in the digital landscape.”

While the network’s digital transmission migration is a flagship of this, the company is set to empower the next generation of television transmission across South Africa. There will be many other focus areas in the way of harbouring new technologies moving forward.

“While we will continue to leverage our existing business, and look to augment services such as digital terrestrial television, we’re equally looking to provide OTT platforms, introducing and delivering audio, video and other forms of media across South Africa,” Booi reveals.

“We will also be branching out into the Pan-African market, offering consulting services, pursuing the acquisition of complementary assets to diversify our revenue further, and implementing a broadband strategy with the view of positioning ourselves within the fixed wireless market.”

Moving forward, these tech-centric motivations will provide the foundations for the organisation’s wider priorities of achieving both organic and inorganic growth.

“Our industry is undoubtedly being disrupted by the different ways consumers can access content,” Booi reiterates in his concluding statements.

“Consumers want to be able to access their content at their own convenience from anywhere, at any time and from any device. This has revolutionised the way content is delivered to consumers and has enabled mobile operators and other service providers using IP to play in this space.

“Our competitor landscape has changed as a result, as has the value chain affected by consumer behaviour, but I believe such progression matches up well with our own ideals – for us, the revolution is exciting.”