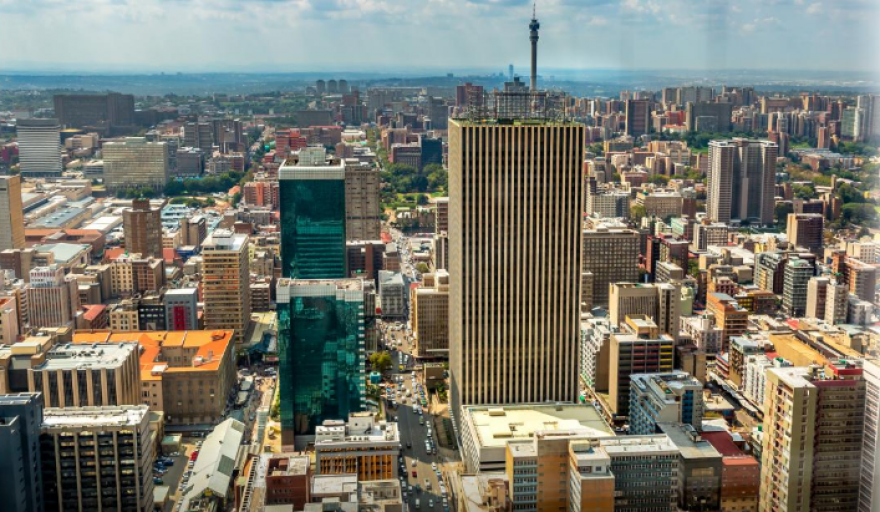 Gauteng is a wealthy province packing a lot into a relatively small geographic area. From the cities of Pretoria and Johannesburg to the craggy ranges of the Magaliesberg, the region offers a multitude of cultural and outdoor attractions.

Pretoria is one of South Africa’s three capital cities; a genteel metropolis of colonial architecture and Jacaranda-lined avenues. It’s here you’ll find the sprawling buildings of the South African government, and the towering granite Voortrekker Monument.

Johannesburg is a dynamic city experiencing something of a renaissance after decades of economic decline. The district of Maboneng was named one of the world’s coolest neighbourhoods by Forbes magazine in 2018. The city also boasts world-class museums, such as Nelson Mandela’s House and the Apartheid Museum, which delves deep into South Africa’s turbulent past.

Outside its urban areas, the province has a lot to offer. The Magaliesberg is a mountain range renowned for its hot air ballooning and skydiving opportunities. Meanwhile, the Cradle of Humankind is one of South Africa’s eight World Heritage Sites – a rolling grassland where the earliest ancestors of modern humans were discovered.

Gauteng is a destination of choice for those who want both the city and the great outdoors at their fingertips.

Gauteng Province is the economic epicentre of South Africa, contributing over a third of the country’s GDP. Its name in Sotho-Tswana even means “place of gold.” This is because gold was discovered in the region in 1866, leading it to become the single largest gold producer in the world.

But it hasn’t all been plain sailing. South Africa is still recovering from the effects of the global economic downturn in 2008. While the GDP is growing year on year, they are still exploring new avenues of growth. One of these is tourism.

As the President Cyril Ramaphosa stated in 2018, “there is no reason why [the tourism sector] can’t double in size. We have the most beautiful country in the world and the most hospitable people.” Tourists seem to agree. Gauteng is the most visited province in South Africa, and Johannesburg is the most frequented city on the African continent.

The South African government aims to increase its tourist arrival targets under their 5-in-5 campaign, which aims to attract five million more tourists to South Africa over the next five years. Out of these arrivals, the share allocated to Gauteng is 1.4 million – the government believes this is an achievable goal.

The Gauteng Tourism Authority began in 1996 as an agency of the provincial government. From 2009 its goal has been to become the primary driver of sustainable tourism in the country. It aims to use tourism as a catalyst for development, transforming historically disadvantaged areas into places of positivity for tourists to visit.

We sat down with Yoland Kona, the Gauteng Tourism Association’s CEO, and spoke to him about how the association is putting the province on the map.

AfO: Since inception, how has the Gauteng Tourism Authority developed and progressed in terms of its key objectives and the messages it tries to get across?

Yoland Kona (YK): The Gauteng Province is not a traditional tourist destination. However, the agency has become the key driver of our national heritage, promoting it to visitors. The agency has raised awareness of Gauteng’s political sites and historical landmarks. We have seen neighbourhoods like Maboneng transformed as part of the inner-city revitalisation project in Johannesburg. It has now become one of the world’s coolest destinations, according to Forbes magazine. This shows how revitalisation projects can help benefit tourism.

AfO: How would you say Gauteng has developed in recent years as a business travel hub, and what are the key reasons behind its growing appeal?

YK:  Johannesburg is a city that has been built by the toil of immigrants, like many other global cities. So a business-making culture has been part of our DNA since inception. Johannesburg grew up around mining, with many people from around the world setting up global mining offices – this is how business travel began in the city. They needed conference facilities and other infrastructure. This is where we draw our inspiration to become a business destination.

After the 2010 FIFA World Cup was held in Johannesburg, we were able to increase our inventory of conferencing and events facilities. Africa’s only high-speed train is available in Gauteng, surrounded by a plethora of hotels, all within walking distance.

AfO: Why, in your opinion, should someone visit Gauteng?

YK: International tourism helps the city emerge from the shadow of its own past. Direct investment and travel into the country allows it to move forward. But it’s also the fact that South Africa is one of the most beautiful countries in the world. In Gauteng we have the mountains, but most of all we have the people. They are warm, interactive and able to embrace everyone. This country is the cradle of all human origins, and everyone should visit their ancestral home at least once in their lives.

YK: Gauteng is the only place in the world which had two Nobel Laureates living on the same street: Desmond Tutu and Nelson Mandela. Visit Vilakazi Street in Soweto Township to explore the homes of both laureates. Gauteng Province is a great space for outdoor activities, especially skydiving or hot air ballooning over the Magaliesberg Mountains. There are lots of attractions within a small geographic space, from cities to safari parks.

AfO: What are the best ways of getting around the region?

YK: Johannesburg is one of the most well-connected African cities, with a rail network connecting each of its five main areas. It also allows you to connect to other parts of the country. Johannesburg airport also has a lot of international connections. Our intercity bus system has also expanded to include a lot of destinations in South Africa.

AfO: What trends are transforming the tourism industry in Gauteng at present? How are you responding to these trends?

YK: We are very much aware of the trends transforming the industry, such as building data platforms with multiscreen capabilities – something we are aiming to do. We are ensuring our website is multifunctional, for both businesses and consumers. User-generated platforms are key in facilitating the growth of tourism, and we are responding to this.

We are also interested in using more geo-tech. We want tourists to visit locations and be able to pull up the history of landmarks on their phones, thereby moving beyond the confines of a tour guide.

AfO: Are you optimistic about the future of the tourism industry in Gauteng?

YK: We are optimistic about tourism here. We believe the country is emerging from the shackles of its past history. Sometimes we underestimate the effect colonisation has had on our history, and on the potential of our country. But with the future beckoning, we have the opportunity to improve tourism and make a greater contribution to the country’s economy.

Johannesburg is a city experiencing a renaissance. Once blighted by apartheid and the economic downturn, it is reviving its most deprived neighbourhoods, with spectacular results. Maboneng, which means ‘Place of Light’, has transformed into Johannesburg’s hippest district, with sculpture gardens, art collectives, and one-of-a-kind shops, restaurants and bars.

Something else putting Johannesburg on the map is its sheer amount of historical attractions. Head to Vilikazi Street, in the heart of Soweto Township, where you’ll find the former houses of Nobel Laureates Desmond Tutu and Nelson Mandela. It’s possible to take a tour of the former.

Constitution Hill is a former prison complex and military fort, now a living museum. Numerous notable figures were held inside its walls: Nelson Mandela, Mahatma Gandhi and Fatima Meer. Explore the Old Fort and the notorious Number Four, a jail for non-white prisoners.

On a lighter note, Johannesburg also offers plenty for the discerning business traveller in terms of conference venues and luxury hotels. It’s also a fantastic place to try cuisine from all around Africa, be it a Mozambican piri-piri stall or a Somali café. There’s also an abundance of South African braai (slow-cooked barbecue) restaurants.

Johannesburg has a laidback, unstuffy atmosphere and welcomes visitors with open arms. You’ll love delving into the city’s neighbourhoods and checking out the local attractions.

The province of Gauteng is accessible by air, via Johannesburg’s O.R. Tambo Airport. It’s African’s busiest airport, handling over 21 million passengers in 2017, and offers direct flights to Europe, Asia and other parts of Africa. It also serves as the hub for South African airways.

It’s easy to travel both within and between Johannesburg and Pretoria. Johannesburg has been improving its transport infrastructure, beginning with the installation of the Rea Vaya bus network linking the city centre to the suburbs.  Minibus taxis and tuk tuks are also available.

The Gautrain is an intercity rail service offering a 15-minute link to O.R. Tambo Airport from Sandton Station. It also services the city of Pretoria. The BRT bus system also links Johannesburg with Pretoria.

Some tourist attractions, such as the Cradle of Humankind, are not well-serviced by public transport. They can be reached via private taxi or self-drive car rental. The province has a good road system, which it continues to improve and expand upon.