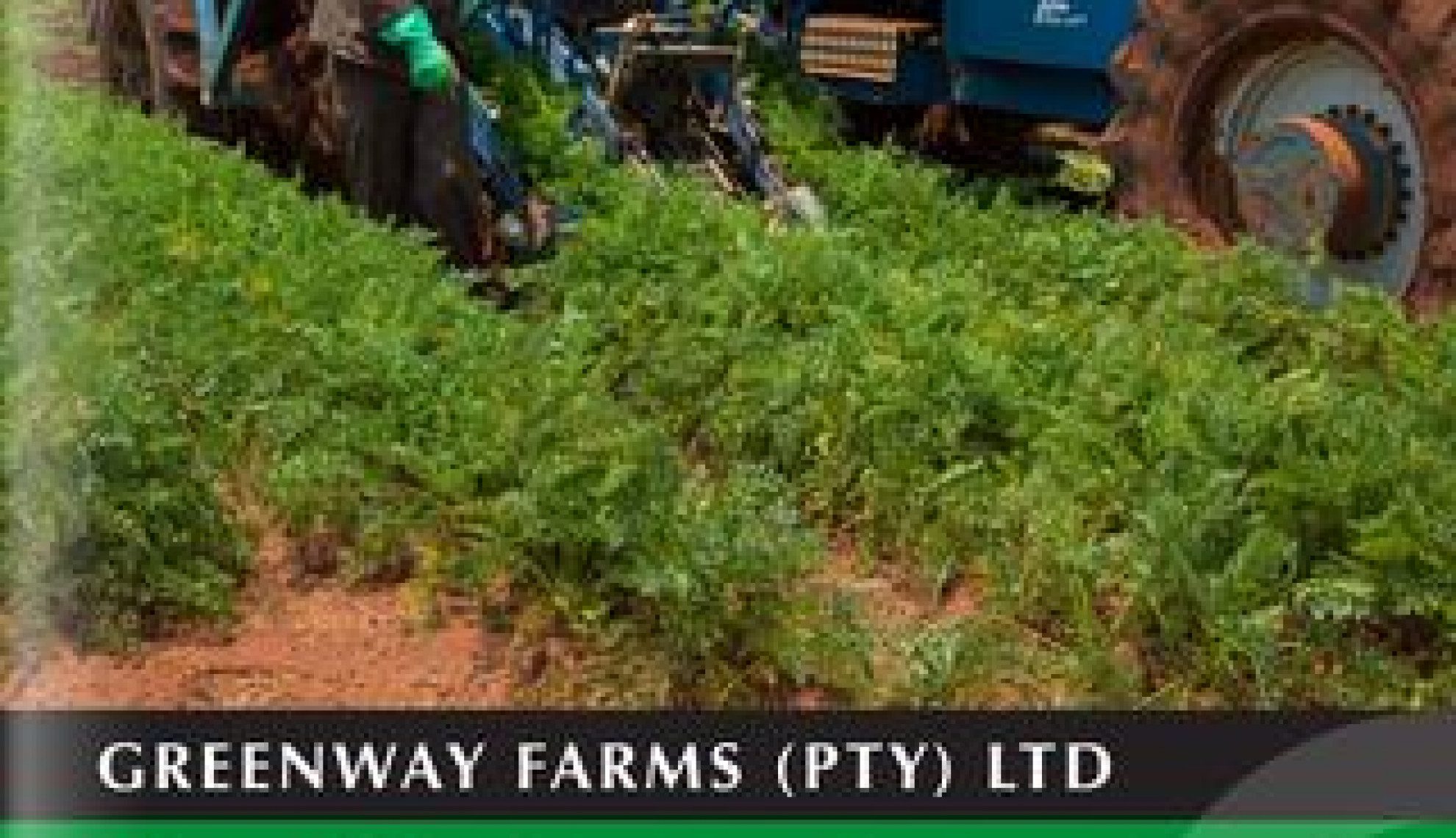 Rugani Carrots represents a move into 21st century food often neglected in South Africa, and the Company behind the now renowned products – Greenway Farms – is now honing in on a diversification strategy to ensure even more concerted growth in the future.

Formulated in 1988, the Rugani journey to today’s thriving family-run enterprise can be split into numerous succinct periods of evolution off the back of financial struggles, outdated methods, industry epiphanies, fiscal revivals and revolutionary breakthroughs. Present throughout all of the above though has been the Managing Director, Vito Rugani; an executive who has never been one to rest on his laurels or to avoid exploring the unexplored in order to achieve the seemingly impossible.

He recalls back to the Company’s early days: “My business partner and I brought the Company together in our late 20s-early 30s having both come from farming backgrounds ourselves, and we began with a very traditional farming business with numerous crops, everything done by hand and the products then loaded up to be taken to the various markets.

“However, by the early ‘90s we realised we were going nowhere; our wages were low but still a vast percentage of our turnover, so something was wrong with our business.”

A subsequent foray into international domains brought to light the mistakes that were being made, not just by Greenway Farms, but indeed much of South Africa’s farming community. Australia’s model, for example, emphasised that such processes hadn’t been used there for nigh on a century, and it was clear that an ergonomic balance needed to be found.

With financial support almost impossible to come by, but a very clear vision of what was needed to be done, the Company invested into a new strategy of mechanisation and specialisation to aid a better paid labour force; marrying the two for optimum production and paving the way for all stages enjoyed by the business ever since.

“Within five years we’d paid back our financial partner the cash, and doubled his money, and we saw phenomenal wage increases as our labour force became more productive,” Rugani notes. “We began to realise that part of productivity and mechanisation was also specialisation. So the mantra from ‘95 onwards was to mechanise and specialise, and to marry man and machine in order to become productive.”

As a pivotal stepping stone on the road to profitability, the Company’s status more than a decade on epitomises the importance of that decision all those years ago, with Rugani carrots and carrot juice products distributed across Southern Africa and beyond, and a workforce feeling every bit as vital within the family as tenth shareholders and with subsequent input into the business’ ongoing development.

The intervening years are where Rugani’s story becomes most interesting, however, embarking on a series of innovative strategies that have gone on to not only change the Company’s fortunes, but indeed the general outlook of the industry in South Africa as a whole.

As such, the Company is now responsible for 40 percent of the carrots consumed in the country each day, but the rationale behind such success has been anything but simple.

“Back then, as well as mechanising and specialising, we wanted to understand some of the fundamentals to drive carrot shelf life,” Rugani continues. “In 2000, our carrot market was around 100 tonnes a day and we did it in a way that was way behind how the rest of the world was doing it; hence hindering shelf life enhancement. It was rushed.”

The introduction of hydrocooling technology after the harvesting process proved to be a huge breakthrough in this area, taking a carrot’s shelf life from four days to four weeks; not only enhancing the Company’s attractiveness as a supplier, but also its footprint in terms of how far it could distribute products. And it all comes down to a theory known as the ‘golden hour’.

Encapsulating the advantages that derive from reducing the time gap between harvest and hydrocooling, as much as 70 percent of a carrot’s shelf life can be lost if left for a day, and it is consequently the most pivotal time for harnessing the most energy from each carrot; a realisation that Rugani believes has revolutionised the Greenway Farms’ processes.

“Our production increased, our economic balance rose, our shelf life expanded, and demand just exploded,” he enthuses. “We quickly had to move from a farm of around 20 hectares, and now have 2,500 hectares based on demand that has expanded between 1995 and 2012.”

Not simply content with unveiling this landmark improvement, the next phase involved harnessing the power of the weather, and in particular, the seasonal aspect of carrot farming which often limits companies to optimal production for four months out of the year.

“To become a specialist is to continually produce the same quality all the time, at the same volumes, and to do this you have to have multiple locations, and that’s what we innovated,” Rugani explains. “We now have three locations with four months at each piece of ground and a team there at different times of the year.

“South Africa’s climate is unique in going through different climates so we have put these farms together to meet the different criteria. It has been a big breakthrough for continuity and quality.”

The next challenge to overcome was the issue with broken – or non first grade – carrots and reducing the amount of waste throughout the Company; leading to the business introducing a carrot juice product and a chain of events unforeseeable by even Rugani himself.

After conducting thorough research and discussions with academics on how to produce the most refined carrot juice, he soon realised that the given concepts already in existence in the region – and largely around the rest of the world – were essentially incorrect.

Subsequently trained in the art of 21st century food, he came back to South Africa with a very clear idea on how carrot juice should really be made.

He says: “It was interesting to hear the advanced thinking which basically explains how carrot juice is not a fruit juice; it’s an extraction, so it cannot be produced in the same way. If you put an apple in a cupboard for a time then it will shrivel, change its shape or go rotten, but a carrot will begin to give life and come back to life. It’s all about harnessing its life force and slowing down the process, and not strangling its energy too soon. It is standard knowledge in carrot farming, but nobody had ever applied it to juice.”

This new and deep understanding of how to optimise the life force of each carrot – whether it was first grade or not – resulted in a new form of carrot juice being unveiled to the market, with immediate acclaim, but even more incredible longstanding advantages soon to be discovered.

“So we ended up with this product and initially gave it to our 200-odd staff on the farm, in the pack house or in the juice factory,” Rugani picks up the story. “Two months later they were coming to us saying it was unbelievable and how good it was for their bodies.

“Around 50 percent of our staff are HIV-positive and one of the symptoms of that is irritable bowel syndrome, and people were commenting on how the symptoms were suddenly going away, they had more energy throughout the day, they slept better at night and their skin was in better condition.”

A call not so long later from the the medical science department at KwaZulu-Natal University confirmed the magnitude of what Greenway Farms had achieved through its revolutionary process of making Rugani 100 percent carrot juice, and a subsequent study was initiated by the institution to explore the exact relationship between a golden hour carrot juice extraction and its effects on the human body.

“Now, the consumer needs to be educated about this and about 21st century food in general. Lots of fruit juices contain large amounts of acid for example, and a lot of our diets are acidic; but if too much acidic food gets in your bloodstream you’re more prone to cancer.

“Lemon, beetroot and carrots are the only alkaline based produce and cancer can’t thrive in those environments, so consumers really need to be educated about how much alkaline-based foods and drinks they take in, in order to get back in the neutrality zone.

“At the moment, the world is short of that kind of food. People know carrot juice is healthy but they don’t know the reasons behind why it’s healthy.”

With the generation of mechanisation and specialisation moulding the Greenway Farms of today, the latest evolution has seen an acknowledgement that nature doesn’t always call for such a strategy, and in fact needs a more diversified natural approach; something which the Company has equally addressed by moving its eggs out of the one basket, and onto pastures new. Literal pastures, to be exact.

The move into beef farming ensures the utilisation of the two-thirds of land being rested from the specialised carrot rotation, with the pastures subsequently bringing an entirely new product range into the fold in the form of grass-fed, free-to-roam beef.

Furthermore, by grazing the cattle on the land, the Company is able to restore a more natural approach to farming through both the digestion of grass, and the use of dung and urine to revitalise the biodiversity in the soil.

Rugani explains: “We’re still a specialist in carrots but instead of going horizontally and over-supplying the market, we are now going vertically by harnessing the life force of the carrots in juice form, and also now through beef which the world is calling for.

“Additionally, we can also harness the energy from the juice production process by using the carrot pulp in the biogas plant to produce methane, which in turn powers the juice plant. The biogas plant also produces a slurry which is essentially organic fertiliser, which is then reintroduced into the lands.”

Some companies in the industry are even making more money out of their by-products than they are from their core farming operations, and this move from Greenway Farms to capitalise on its full potential epitomises the kind of smartness that has got the business from its rather precarious position in the early ‘90s to the nationally significant standing it currently enjoys. As such, the strategy is now a key driver of the Company’s current and future business vision.

“Back then we thought we’d bit off more than we could chew, but life is made for the courageous,” Rugani muses. “If you look back at it, it was madness and it was very tough, but if there’s a will, there’s a way. Sometimes you need to be ready to gamble a lot and that’s the problem with many enterprises now; they mock entrepreneurs but it’s entrepreneurship that makes the world go round.

“Now my partner and I are moving on in age but we have family members already involved in the business and a whole new generation ready to take over in the future.”