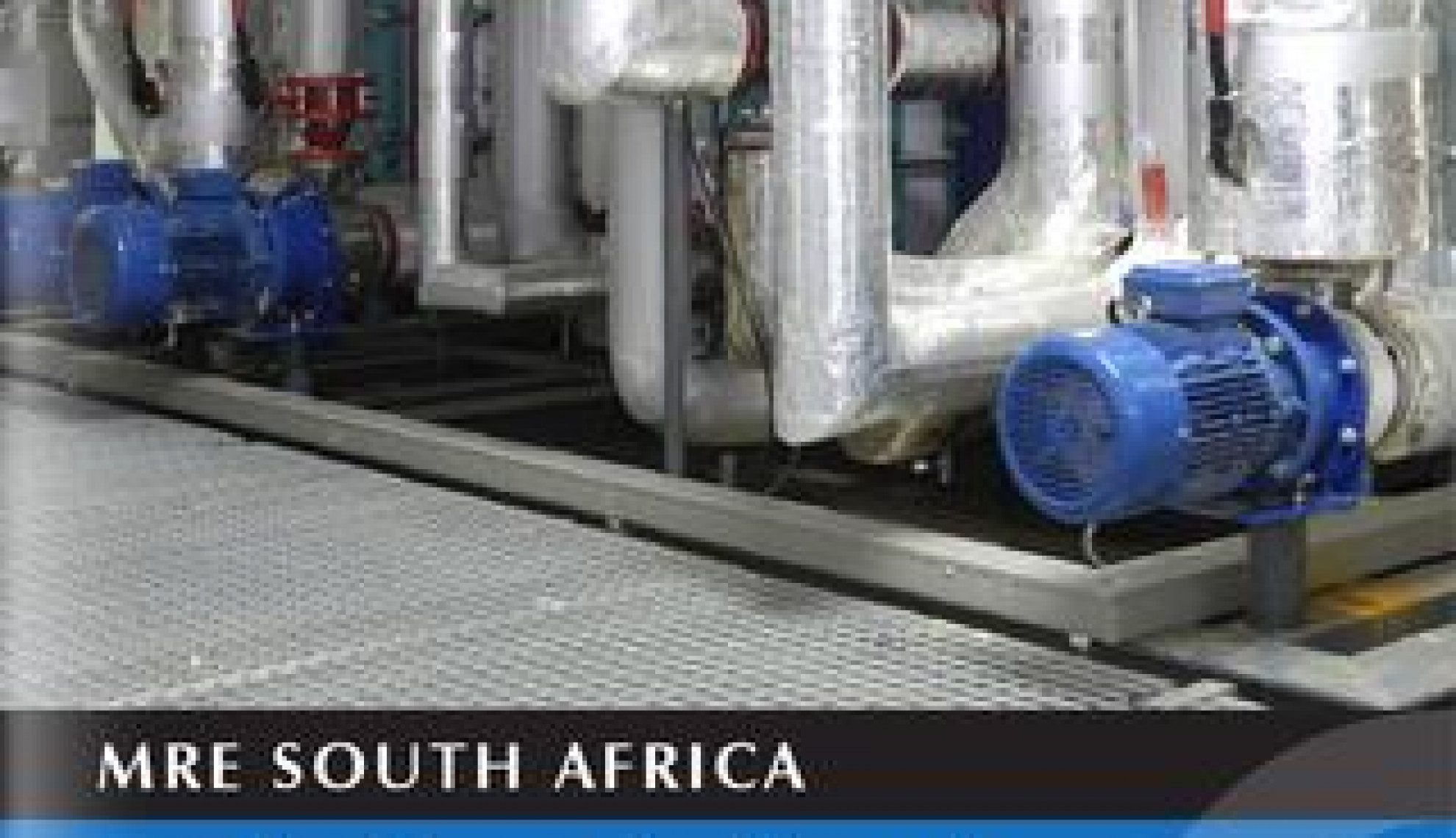 Tip of the Iceberg

MRE has remained loyal to a continuous improvement strategy that has proven successful for two decades in 2015, as a new branch, new personnel, extensive capital investments and strong turnover growth sets the Company up perfectly for the next phase of its growth.

The specialist industrial refrigeration Company has been a market leader across both design and installation since its inception in 1995, complemented by its service and maintenance arm catering for industrial plants, and remaining flexible enough to serve a range of customer needs.

As the second largest refrigeration contracting and compressor packager across South Africa, MRE has built a largely unrivalled reputation for its bespoke capabilities, designing customised products through the leveraging of its experienced and highly qualified local workforce.

“We have excellent installation and service crews who are based locally,” said Managing Director, Dennis van der Westhuizen. “Additionally we manufacture and assemble locally as well so that we can make our products as affordable as possible.

“The Company has gone to great lengths to ensure it adopts the very latest technologies and control systems to achieve efficient operation of refrigeration plants.”

Since beginning operations in Cape Town all those years ago – complemented by additional offices opened in Johannesburg and Durban – the business has gone from strength to strength as a consequence of this local focus; leading to one of the most successful years in MRE’s history in 2013-2014, where clients’ expectations were consistently exceeded.

Now, with an even more successful 2015 being enjoyed, and a fourth plant unveiled in Port Elizabeth, the scope and capacity for the Company to scale even higher heights in the future looks an inevitability rather than a possibility.

Becoming the future of MRE

With a 35 percent market share, the room for growth was seemingly narrow moving from 2014 into this year, but MRE has already recorded a R20 million improvement on last year’s figures, raising turnover from R200 million to R220 million in its year-on-year unveilings.

This has all been achieved despite the ongoing difficulties in attaining the necessary skills in the region; a problem that persists in wider industry, but one that makes MRE’s positive market standing all the more important in becoming an employer of choice.

“A lack of qualified artisans has forced us to implement our own in-house training in order to up-skill the industry,” van der Westhuizen noted. “We see our training as a way of making a positive impact to the local workforce in South Africa, and consequently offer free education and training to any applicants that require financial assistance.

“Currently, we have trainee technicians and welders in a series of continual programmes of skills improvement, while MRE is also employing young engineers to train and become the future of MRE.”

Adhering to the mantra, “people make MRE strong and are the future of its existence” the MD has subsequently made the philosophy a central pillar of the Company’s overall approach to continuous improvement, complemented by continuous capital expenditures to balance out the human-automation influence within the manufacturing process.

“MRE not only strives to keep up with the latest technologies in automation, but also focuses on up-skilling the industry, using a balance of automated and manually operated lines,” van der Westhuizen continues. “We also strive to be energy efficient in all our plants wherever we can, and use heat recovery ventilation in order to not only provide fresh air and improved climate control in the plants, but to also save energy by reducing the heating and cooling requirements.”

Equally improving efficiencies internally as well as for its clients, MRE went into the latter part of 2014, and the beginning of 2015, knowing that resting on the Company’s laurels was not an option.

Van der Westhuizen emphasised: “Our entire team have been assisting in ensuring our success. Due to the hard work across the board, it is difficult to put our success down to one area alone. However, in order to maintain this growth status, it is important for MRE to constantly monitor their training, internal policies and capabilities.

“Constant improvement is a must in our business. Therefore, we are concentrating hard on improving our service department nationwide. By focusing on our customers, we hope to increase partnerships and those who consider us for their patronage.”

Not only working for significant market players in terms of its customer base, much of MRE’s success stems from its ongoing work alongside significant industry operators in relation to its supply chain and the formulation of mutually-beneficial business partnerships.

The MD continued: “MRE works with highly-reputable associate companies, both international and local in origin, and all of them are vital to our operations.

“With the majority of MRE’s refrigeration equipment being imported from abroad, the Company encourages local partnerships wherever possible to try and instil as much local content and job creation as possible throughout all our systems and packages.”

Many of these relationships have evolved over the majority of MRE’s 20-year tenure, and incorporate everything from the provision of technological expertise from the likes of Danfoss, to areas of green energy optimisation alongside operators including Puregas, HC Group and Electric Assemblies, and more industry-specific equipment upgrade relationships alongside Baltimore Aircoil Company; all contributing to the MRE success story over the past decade or more.

Tip of the iceberg

The extensive growth enjoyed by MRE over the years is a testament to all aforementioned areas of internal growth and strategic relationships, and has culminated in the natural decision to look further afield in the future.

Remaining flexible and entrepreneurial enough to involve itself in new projects quickly and agilely, contracts are consequently being awarded to the Company on an increasingly frequent basis, with van der Westhuizen understandably now earmarking international expansion as a more than reasonable aim for the future evolution of MRE.

The MD concludes: “MRE sees South Africa as the foundation for an even further reach across Africa. The continent is a growth point and we are looking forward to using South Africa as a springboard to reach other countries.

“There really is significant potential and this is just the tip of the iceberg.”