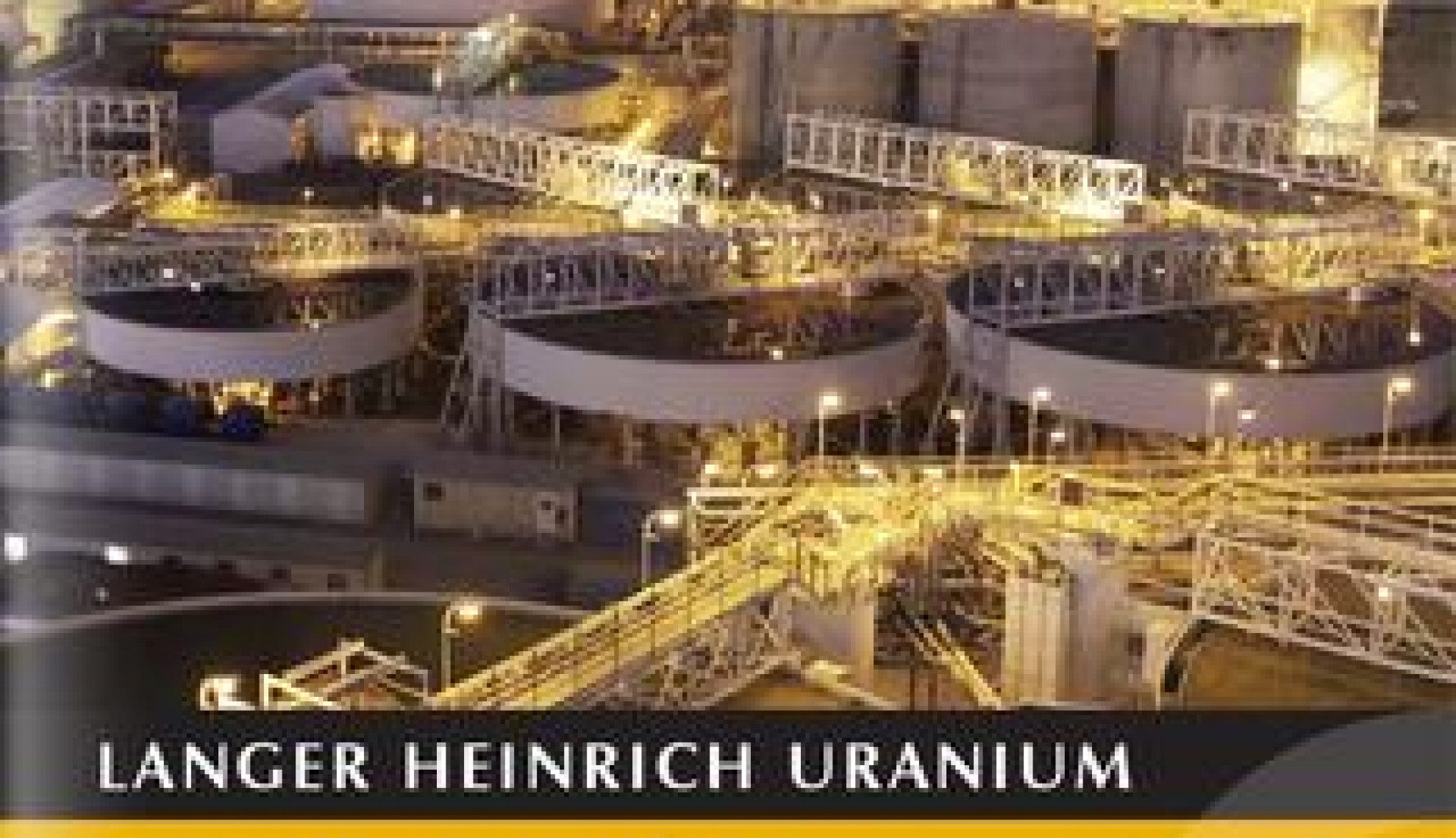 Langer Heinrich Uranium (Pty) Ltd, 100 percent owners of Langer Heinrich Mine (LHM) in Namibia, has successfully reached Stage Three expansion targets and is now operating in excess of the nameplate level 5.2Mlb pa (million pounds per annum) of U3O8 as it looks to complete the next stage of development at a time where higher uranium prices will dictate future expansion opportunities.

“With a refocused mandate, Stage Four has presented a unique opportunity for improvement and optimisation, resulting in an expected future feasibility of increasing production to 8.7Mlb uranium ore and upgrading the plant’s facilities,” said the Company.

Moreover, experts predict that the accelerated GDP growth levels, which currently stand at 5.3 percent, should continue to remain strong in the coming years, driven by increased mining activities as new mines start production and the export market grows.

“Various piloting and testing programmes will continue in order to consider the available options and enhancements in preparation for the future expansion of our mine in line with economic development. Our goal will be to increase production with reduced unit costs and improve process efficiencies, while reducing feed grade into the plant to the reserve average of 520ppm uranium ore,” added the Company.

As a result of the work undertaken, and its achievement of an ISO 14001:2004 environmental management system certification, the Langer Heinrich Uranium project is in an excellent position to respond to these market conditions and expand its operations as soon as the price is sufficient. “The certification applies to our entire mining operation, including open-pit mining and production of uranium oxide in Namib-Naukluft National Park,” cited the Company.

Located at the foot of the Langer Heinrich Mountain in the Namib Desert, on the western side of central Namibia, LHM is 80 kilometres east of the major deepwater port at Walvis Bay and the coastal town of Swakopmund, and spans across a 15 km-long tertiary paleo-drainage system containing seven contiguous mineralised zones. When production commenced after the official opening of the mine by the President of Namibia in March, 2007, LHM became the first conventional uranium mining and processing operation to be brought online in more than a decade.

With an original budget of US$92 million and overcoming significant cost pressures during the 20-month construction term, the Mine has successfully completed three stages of expansion, producing at a rate of 5.7Mlb per annum.

“These reserves form the basis of the continuing life of mine plan for the project and the revised mine plan allows a project life in excess of 20 years,” explained the project details on the website.

Due to the current stable economic and political environment, Langer Heinrich Uranium has been able to take advantage of Namibia’s mining-related infrastructures such as roads and port connections; and its already diverse mining industry involving not just uranium, but diamonds, gold and base metals.

“The Namibian government actively encourages the growth of its mining industry, which is a solid contributor to the country’s economy via a strong export market, and we are proud to play a part in this,” detailed the Company.

After a government-sponsored airborne radiometric survey of the area, the Langer Heinrich deposit was discovered in 1973. Despite its discovery and subsequent eight-year project evaluation, the Mine was unable to begin sustainable operations due to depressed uranium prices.

In 1998, LHM was sold to the Australian-listed public company, Acclaim Uranium NL, who completed a highly favourable pre-feasibility study for the area. Once again, adverse uranium market conditions in the late 90s and low prices curtailed development.

Despite this, Acclaim sold its holding in Langer Heinrich Uranium (Pty) Ltd to Paladin Energy in 2002. Following this acquisition, Paladin initiated a bankable feasibility study (BFS) which was completed in April, 2005. “The BFS confirmed that the project was capable of generating highly attractive returns using the defined reserves only, and with construction and staged commissioning achieved in December 2006, the mine officially opened in early 2007 with precise goals to make operations profitable after remaining unused for almost seven years,” highlighted the Company.

Given the initial successes, a Stage Two expansion programme was completed in June 2009, which involved a US$50 million investment to boost the mine’s production to 3.7Mlb a year. The Company further detailed: “This involved upgrading the recycle crushing circuit and feed conveyor, expanding the cyclone circuit and installing a new pre-leach thickener, additional leach capacity, heaters, high-density thickeners and IX columns. It also involved the expansion of the new drier, including the feed arrangement, increasing the capacity of reagent dosing, the construction of additional motor control centre (MCC) buildings and upgrading the tailings disposal.”

In order to deliver the additional feed required for the Stage Two expansion, LHM had to increase its mining fleet and enhance its logistical capabilities to ensure safe passage of the final product to the port.

Additionally, Stage Three expansion was completed in March 2012 which saw annual production increase to 5.29Mlb of U3O8 a year and further improvements to the above production methodologies listed in Stage Two. The Company continued: “Stage Four began in the last quarter of 2012 when we received environmental impact assessment approvals from the Namibian government. We have now begun the bankable feasibility study which will see us expand the mine geographically.”

“The feasibility study for Stage Four expansion is investigating the viability of setting up a new 8.7Mlb per annum production plant adjacent to the existing one. It will also investigate the potential of heap leaching or upgrading the material and mineralised waste rock with a below cut-off grade to recover an additional 1.3Mlbs of uranium. As stated previously, the expansion will not occur until there has been a substantial increase in incentive uranium price.”

The latest piece of significant news from the Company came in July last year, when Paladin Energy entered into an agreement to sell a 25 percent stake in LHM to a wholly-owned subsidiary of China National Nuclear Corporation, CNNC Overseas Uranium Holding Limited. “This agreement allows CNNC to purchase its pro-rata share of product at the prevailing market spot price and it is expected that the agreement will enhance the long-term growth and development of the Langer Heinrich operation,” emphasised the mining house.

Given the world’s divided opinion on nuclear energy, particularly since the March 2011 Great East Japan Earthquake and resultant tsunami which inflicted severe damage of the Fukushima Daiichi reactors, most countries have radically overhauled their comprehensive safety review of existing nuclear power plants; placing several projects on hold and having a knock-on effect that has caused a downturn in uranium mining. Post-Fukushima though, worldwide reactor plans have been re-affirmed and work has continued on reactors under construction.

Furthermore, the spot price for uranium has been showing signs of recovery since the global financial crisis, however for the first time since 2005, uranium reached a low point of below US$30 per lb of U3O8 in mid-2014, but this has not deterred Langer Heinrich Uranium as the Company is confident that the market will recover, given that the economy shows no signs of slowing down more generally. “The medium to long-term outlook for uranium is still extremely buoyant and is underpinned by the increasing demand for uranium to fuel existing and new reactors and the inability of the current uranium supply sector to significantly increase production.

“In line with this, many of Japan’s power plants are due to be restarted in 2015, which is an important step forward after the past four years since Fukushima. The pace of the restarts may remain slow, but the long-term outlook remains encouraging,” said the Company.

Worldwide, there are now 72 nuclear power plants under construction, ten more than at the time of Fukushima. This means there are 435 operational reactors that consume more than 170Mlb per annum of U3O8, and the Paladin Group forecasts that global uranium demand will reach 230Mlb per annum by 2020 as Langer Heinrich Uranium concluded: “The global uranium production industry will struggle to meet this rapid growth in demand, however, we are in a strong position and can further increase production in line with this forecast when necessary via a Stage Four development.”