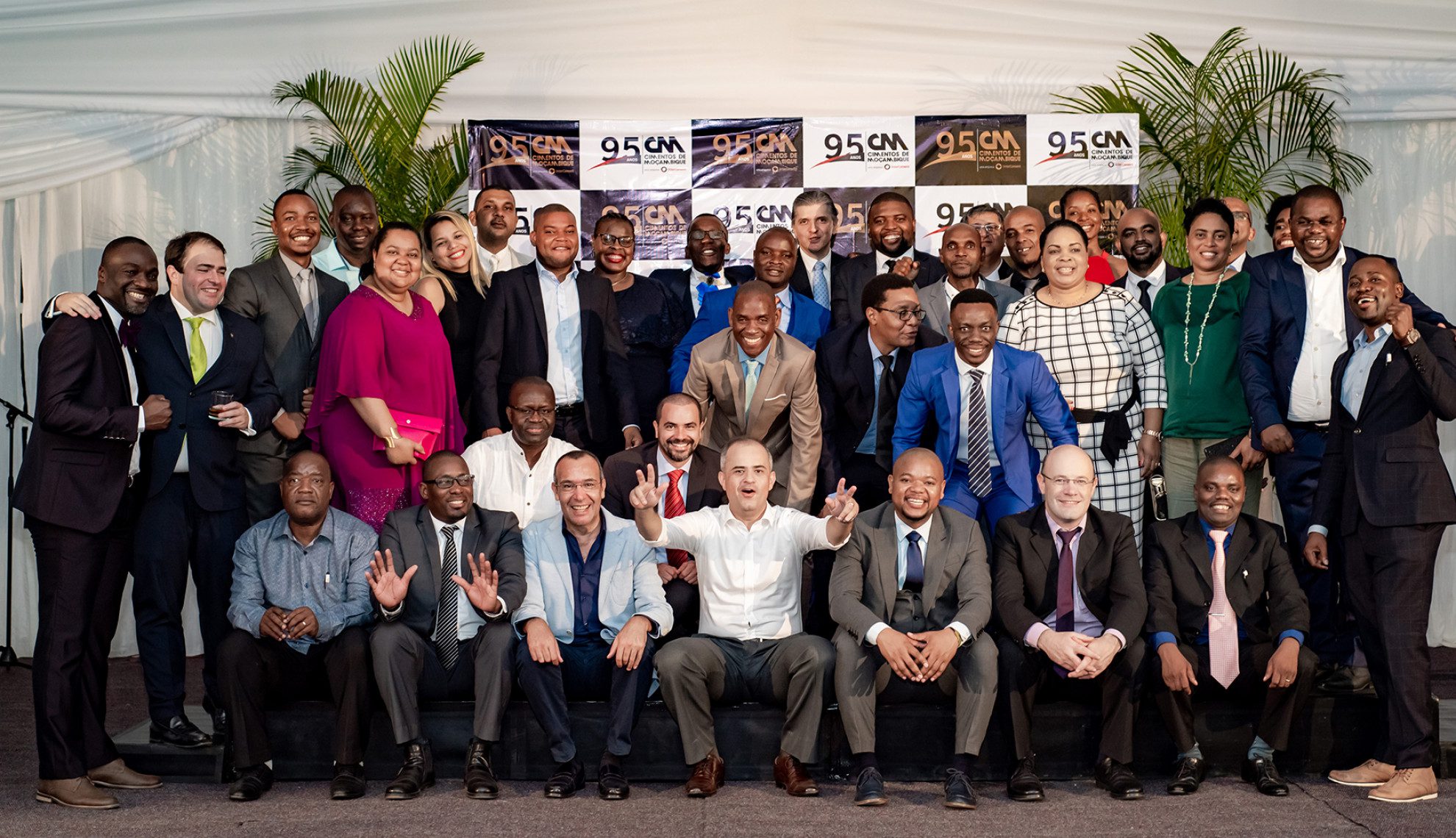 Cimentos de Moçambique continues to create prosperity for the country, not only by supplying major infrastructure with high quality cement, but through generating opportunities for people and communities
Writer: Tom Wadlow | Project Manager: Josh Mann

For a building material that traces back to ancient Greece and Rome, cement, it is fair to suggest, has stood the ultimate test of time.
Around 2,000 years ago, human ingenuity deduced a reaction between lime and volcanic ash when mixed with water, a cementing material which formed the basis of huge swathes of construction work in Western Europe, the classic pozzolana cement gaining its name from the Italian city Pozzuoli.
The Portland cement we are familiar with today was first developed in England by John Smeaton before being patented by Joseph Aspdin in 1824, who produced the material from a synthetic mixture of limestone and clay, a move which sparked an enormous spread of cement manufacturing worldwide throughout the 19th and 20th centuries.
Worldwide production is still on the rise today, the 4.1 billion tonnes made in 2019 markedly higher than the 3.3 billion tonnes recorded in 2010, although slightly under the 4.18 billion-tonne peak witnessed in 2014.
The wider point, however, is that modern-day construction is still reliant on the production of cement in enormous volumes all over the world.
In Mozambique, almost all of its 20th and 21st century infrastructure carries the cement stamp of just one organisation.
For almost 100 years, state-run and now privately owned Cimentos de Moçambique has been producing this vital building material all over the country, a defiant constant during a tumultuous recent past which has effectively helped to build a nation from the ground up.

Its current Chairman and CEO is Edney Vieira, who arrived at the company on the back of more than two decades of experience in the industry, much of it with InterCement, the group which owns Cimentos de Moçambique.
Mozambique has presented a different opportunity to Vieira, who previously worked in Turkey and Portugal before moving out to the African continent (including six years in South Africa).
“I enjoy living and working here in Mozambique, even though it has its own unique challenges,” he says. “In the other countries I have been in you are used to having everything, whereas here you really learn to value what you have.
“Humans have a tendency to complain about things they don’t have, but we look at the full half of the glass here. The people are wonderful and welcoming, and the country is also naturally very beautiful.”
The conversation leads into the current situation the CEO finds himself in, regarding steering Cimentos de Moçambique through the current uncertainty caused by the coronavirus pandemic. While Mozambique, like many developing nations, has not faced huge numbers of cases for a variety of reasons, the economic impact of COVID-19 is still presenting a challenge.
“There are some cases here, but we are fortunate to not have suffered with a huge outbreak like countries in Europe or the USA, although every fatality caused by COVID-19 is a tragedy that we cannot ignore,” Vieira adds.
“The virus has also had its impact on us financially – we have felt it in terms of sales, but I am optimistic about getting through this and looking ahead to a more prosperous time.”
Indeed, that Cimentos de Moçambique has been able to stand strong for 95 years suggests it is better placed than most to emerge out of the coronavirus pandemic in relatively good health.
Its five operational plants are spread throughout three provinces in the south, centre and north of the country, staffed by approximately 900 direct and indirect employees who produce 32.5 and 42.5 grade cement to for a diverse range of clients.
From retailers to heavy construction contractors and local firms to multinationals, Cimentos de Moçambique is renowned for its reliable and quality product, the company also able to make very specialist batches of 52.5 grade for specific projects when required.
For Viera, this reputation and nationwide coverage is key to holding firm against competitors in what is a vibrant sector.
“The competition here is very healthy,” he adds. “There are several competing companies which means we have to stay on our toes and make sure we produce the best possible product – we also have spare capacity meaning we are ready to fulfil any future demand.
“The market is well set up and the government has worked hard to safeguard our industry against unfair import competition, which has helped to protect quality, keep revenue in the country and maintain employment.”

“Humans have a tendency to complain about things they don’t have, but we look at the full half of the glass here. The people are wonderful and welcoming, and the country is also naturally very beautiful

A virtuous cycle
Cimentos de Moçambique’s major advantage, as well as its geographic reach, is its brand recognition.
Being the sole operator in the country for decades enabled it to entrench itself into the market and put its stamp on almost every iconic building project until competition began to enter the market, and the fact it still commands the trust and custom it does is testament to the unwavering commitment to producing a quality product.
“In all my career I have not been at a company with such a long and proud history of operation,” Vieira states. “Mozambique’s recent history through the 20th century has been blighted by wars and instability, but the cement plants were still operating and helping to build the country – it is a remarkably resilient organisation. As a matter of fact, Cimentos de Moçambique has essentially built Mozambique.
“It is something which makes us proud, not only for me as CEO, but for the families who have dedicated their working lives to making sure we produce quality products, some being tied to the organisation over several generations.
“They are part of what I call a virtuous cycle of employment, production and productivity, with Cimentos de Moçambique at the centre, like the sun in a solar system which powers the planets revolving around it. This progressive cycle has been functioning for nearly 100 years, and long may it continue.”
The virtuous cycle Vieira refers to encompasses local suppliers up and down the value chain with whom the company does business.
Vieira is quick to acknowledge the critical role that both Mozambican and international partners play in ensuring the smooth running of the organisation on a day to day basis, Cimentos de Moçambique prioritising local vendors where possible in its procurement activities.
Localised employment is also a fundamental part of the virtuous cycle.
Indeed, finding skills is cited by the Chairman and CEO as arguably the company’s greatest challenge, the firm determined to address this shortage by investing heavily in training and development in the form of internship programmes.
“I am proud to say that one of our plant managers joined us as an intern,” Vieira adds. “We have many powerful examples showing the impact of Cimentos de Moçambique on the lives of Mozambicans.”
Beyond employment opportunities, the organisation contains internal groups who volunteer time to create projects designed to engage with the community, the idea being to contribute a lasting impact which will deliver long-term benefit.
“By principle, we do not simply give money, as we don’t believe it is enough to simply offer finance as it will disappear down the chain if you don’t help in other ways,” Vieira continues. “We invest in projects which can be handed over to local people – schemes which can grow to a point where they become self-sustaining, like incubating a new business.
“Investing in youth is also vital to the future prospects of Mozambique, so a lot of our CSR activities support initiatives with schools in the communities surrounding our plants. We educate students on what we do and how we do it, and often their parents work at our plants, so it is a way of helping encourage younger generations to engage in our industry and become interested in pursuing a career with us.”
The company also looks out for the community in an environmental sense, doing what it can to minimise the impact of its production operations.
It has invested heavily in waste management and co-processing, a technique which involves burning industrial and urban waste like tyres, used oils, plastics and paints to replace traditional fuels, without generating new waste and harming the environment.
Not only this, it also contributes to the virtuous cycle by joining up operations with different sectors, in turn generating employment and promoting social development.
Building prosperity
Creating prosperity is ultimately why Cimentos de Moçambique exists, and this is very much the focus of Vieira moving forwards.
Asked to conclude our conversation by summarising his outlook and plans for the future, he continues to look at the full half of the glass, not least because of major LNG-related infrastructure projects in the horizon in the north of the country.
“We strongly believe that these big projects must have the Cimentos de Moçambique stamp on them,” he says. “They are crucial developments for the country, and we are ready to supply them with the high-quality cement that they need. This is our future. We are one of the pillars and part of the foundation in the building of Mozambique.
“We may be nearing a century, but the company is still young at heart and more youthful and vibrant than ever. Our employees are engaged and continue to be the beating heart of the business, so we must do our best to keep them motivated.
“This is what defines us – we have been a part of the making of this country and will keep adapting and improving in order to continue contributing. Building prosperity is what we believe in, and together we are stronger.”