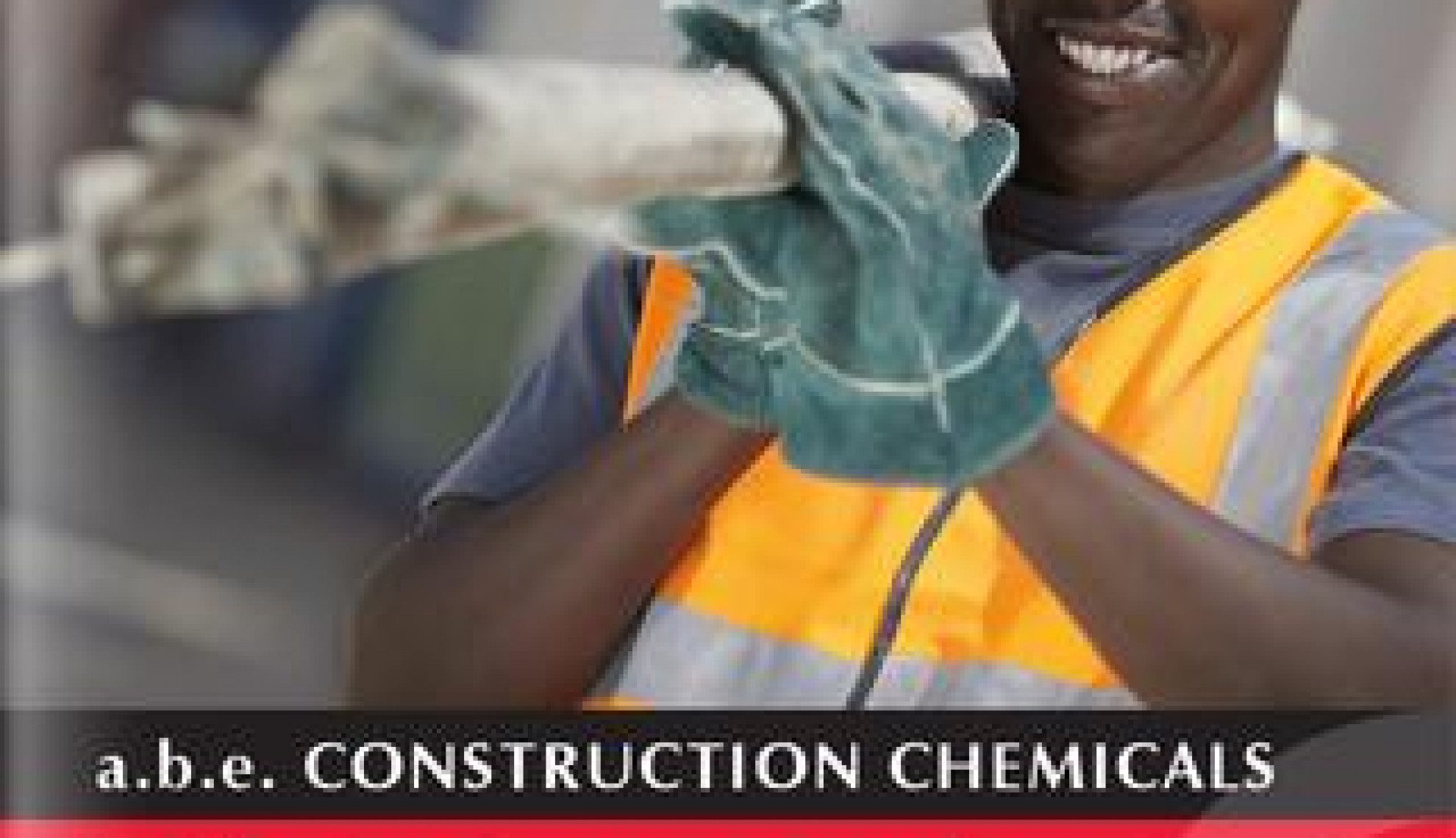 Contributing to the Sustainable Building Revolution

a.b.e. Construction Chemicals (a.b.e.) is making inroads into Africa despite facing an increasingly saturated market. Having launched several new products in 2015 as part of a wider growth strategy, aimed at diversifying its revenue streams by offering more solutions to its customers, the Company has significantly increased its market share in sub-Saharan Africa by widening the reach of its export division.

Established in 1939 as a supplier of bitumen to municipalities in Kwa-Zulu-Natal, a.b.e. has grown in terms of both its size and product offering over the years; becoming a major supplier of specialised construction products to the building, civil engineering and building maintenance industries through an efficient branch network that secures a direct supply of product to its customers.

Manufacturing out of its facilities in Boksburg, Johannesburg and Isipingo, Durban, a.b.e. is a wholly-owned subsidiary of the Chryso Group, a leading international supplier of concrete and cement admixtures. “Chryso’s South African division has invested heavily in plant infrastructure and new technologies, as well as technical training and customer support which a.b.e can leverage to further enhance its position in the market and add value for its customers,” says the Company on its website.

Entering 2016, a.b.e. is to continue improving its internal processes through investment in further upgrades to its production facilities and via innovative research and development programmes; while utilising its existing supplier channels to introduce these new products to the market which further support its vision for the future.

With the addition of a Chryso office in Kenya last year, designed to support the development of both a.b.e. and Chryso East Africa, a.b.e. has begun strengthening its business in Mozambique and Zambia by employing a team of dedicated sales staff to support the Company’s traditional distribution channels.

Moreover, a.b.e. also began a move into other parts of Africa, eyeing opportunities in the emerging markets such as Angola, and the more lucrative market in Nigeria.

Norman Seymore, CEO of both a.b.e. and Chryso reflected on a.b.e.’s current performance in a recent press release: “a.b.e.’s Polyurea segment now supplies products that complete our product offering in waterproofing, flooring and coatings, while the various other segments of our operations also generally performed well; particularly in the flooring sector where growth surpassed budget expectations.”

Committed to a continuous growth pattern in the face of increased competition, a.b.e.’s unique combination of Chryso’s traditional activities in the field of cement and concrete additives and the construction systems offered by a.b.e., provide a complete product solution for the construction industry.

“a.b.e. is also continuing to invest in expansion and improved manufacturing plants. Further capital expenditure projects for both the Boksburg liquid and powder plant have already started, and the Isipingo plant also invested in new packaging lines in 2015,” he added.

In line with these facility improvements comes a whole host of investment in a.b.e.’s corporate structure, designed to better position the Company to capitalise on opportunities across sub-Saharan Africa. One example of this is the creation of Product Segment Forums which replace the Company’s traditional Product Manager roles.

“The new Forums are made up of staff representing the retail, construction, technical and marketing departments to ensure that all areas of the Company are represented,” the Company explained.

a.b.e. is equally committed to sustaining Chryso Group’s sustainability policy, comprising seven values across the areas of economic, environmental and social commitments that can have an impact on each country of operation.

In an effort to improve labour stability and investor confidence in Africa’s construction industry, a.b.e. is able to access Chryso Group’s training programmes and expertise; with the CEO stating that “training is one aspect of our business that is absolutely non-negotiable”.

Backed by the relevant health and safety certifications, a.b.e. Construction Chemicals now hold an ISO9001 accreditation at its Boksburg, Isipingo and Mount Edgecombe factories and offices; with the more recent aim to obtain OSHAS18001 at all of its branches.

“We are committed to the health and safety of our employees and to sustainable construction practices, as evident in the Group’s recent product launches as well as its improvements at manufacturing sites, where significant measures have been introduced to reduce the impact of production processes on the environment,” Seymore noted.

With these new certifications, a.b.e. hopes to capitalise on the long-awaited rollout of projects for the South African Government’s National Development Plan (NDP). Launched in 2015, the NDP was predicted to have a major positive impact on the entire construction industry, with the hopes that investor confidence will continue to rise alongside this in the country.

The Company concluded: “Supported by a network of branches and distributors throughout South Africa, sub-Saharan Africa and the Indian Ocean Islands, a.b.e. is now better positioned to capitalise on new markets and new custom