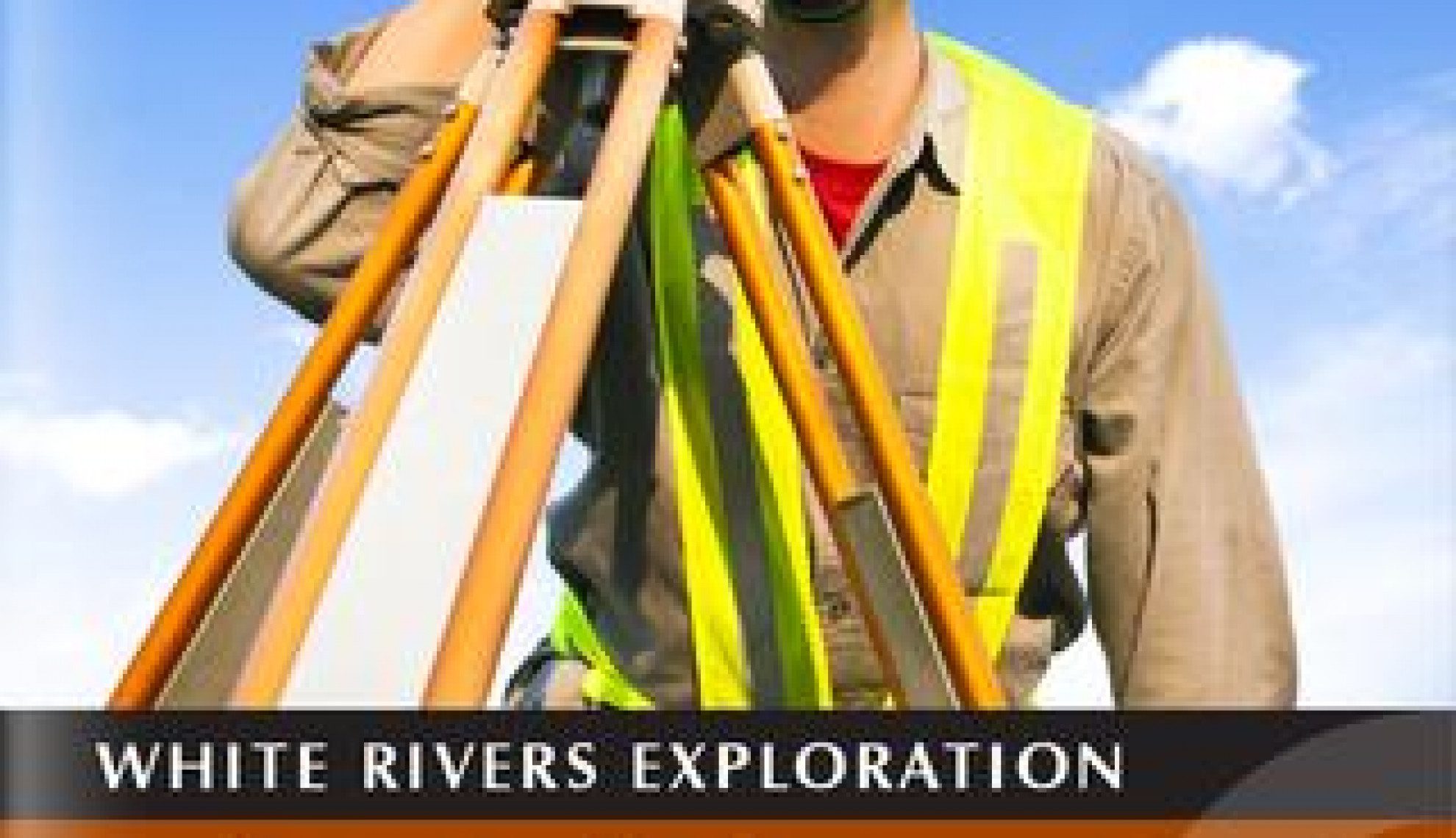 The Next Generation of World-Class African Mines

White Rivers Exploration is embarking on the most exciting period of its eight –year presence in South Africa as it looks to turn its extensive exploration and data acquisition efforts into tangible, profitable results.

The company’s journey began in 2007 after industry-renowned mining prospector and entrepreneur, Mark Creasy took the decision to capitalise on the new Mining Act in South Africa and to self fund White Rivers’ exploration of the commodity-rich Witwatersrand Basin.

The new regulations stipulated that there would be a ‘use it or lose it’ jurisdiction imposed on all existing mining houses with large tenement holdings in the region; subsequently paving the way for a company like White Rivers to pick up where some exploration efforts had left off decades previously.

“Mark Creasy is one of the most successful prospectors in the world and decided to send a team of people to South Africa to actually start applying for some of this now vacant land in the Witwatersrand Basin, mainly abutting or near existing operations with installed infrastructure,” recalls White Rivers Exploration’s Executive Chairman, Neil Warburton. “Being private, we regard ourselves as a very nimble and fast moving company with not a lot of bureaucracy, and with the sole funding from Mark Creasy, we can focus on taking the prospective exploration permits through development to production.

“With the assistance of our BEE partners, this process has been successful. With funding aligned with adding value to the company’s diverse range of mineral assets, this has led to us looking to list on an international stock exchange later this year.”

Mining production and a stock exchange listing will represent the ultimate fruits of White Rivers’ hard labour over its first eight years in the Witwatersrand Basin, and will prove to be a just reward for an ongoing project of this complexity.

“We appointed Shango Solutions as our exploration consulting group, one of the largest and experienced Groups in the industry, in South Africa,” Warburton explains.  “What we asked them to do when we started was to commence acquiring drill hole and seismic data on our project areas, but we discovered very early on that the areas had already been largely drilled out.

“However, a lot of the previous data had been lost or misplaced, as a result of the big mining houses being broken up or sold off. The transfer or single repository of that information had been lost.”

What followed has been an extensive and comprehensive effort between Shango Solutions and White Rivers to track down and acquire that lost data; amounting to a total of AUS$8 million being spent on the project areas since 2007.

Consequently, White Rivers now comprises one of the largest privately owned databases in the Witwatersrand Basin, incorporating 3,500 drill holes made up of survey data and vital geological information.

Warburton adds: “There was pressure on us to drill holes and to stick in the shafts and infrastructure ourselves, but that takes years to do with the necessary feasibility and mining studies, and is also very expensive.

“By spending the money to acquire the data that is already in existence – and we have already sourced data from more than 20 individual sources – we are able to make much quicker decisions, at less cost, which guarantees that prospective areas are defined more readily.”

White Rivers, thanks to the help of Shango Solutions, now has a very clear interpretation of the entire geological structure of the Basin, helping the company not only determine prospective areas for exploration and future mining on its tenements, but also where best to apply for new tenements moving forward.

These applications within the Basin now total 32 in the form of exploration permits, the majority of which receiving the highest form of governmental tenure known as ‘registered’.

These 32 permits cover approximately 3,500 square metres of land, grouped into 12 marked out project areas, and while White Rivers made these applications with the unearthing of gold in mind, the data acquired later revealed a much more widespread and lucrative prospect in terms of the commodities at hand.

“Our primary focus was and still is gold,” Warburton states. “However, what we stumbled across was that a lot of the data indicated that there was coal present at some locations.”

While some mining houses had traditionally only put in applications for single commodity exploration projects, White Rivers was prepared for such a pleasant surprise having received permits to allow exploration on all 17 commodities, including iron ore, base metals, precious metals and coal.

Warburton continues: “What we found when we started acquiring all of this data was we not only had gold information, but also uranium, manganese and coal as well.”

This, combined with gas assets that White Rivers has also found within its project areas, has opened the door to even further revenue opportunities – in the form of coal – in the future to complement its mining and joint venture goals.

These coal resources will go towards serving a significant need within South Africa at present; identifying a joint venture partner in the energy space to extract the coal, generate electricity and feed it into Eskom’s grid for power generation.

Warburton hopes that this initiative will have taken off within three years, alongside similar usage of its gas reserves which can similarly be utilised in the energy sector via third parties.

The benefits emanating from the information already held by White Rivers continues to diversify and expand, but the primary goal still revolves around its gold efforts, with the company staying true to its initial strategy of bringing an existing commodity-rich area to the point of mining activity through the establishment of key joint venture partnerships with neighbouring operations.

Throughout its areas of exploration, one is already nearing this significant stage, as Warburton enthuses: “Our most advanced location is Beisa which is on the western flanks of the Free State, northwest of Welkom, and in September last year we formed a joint venture with Harmony to explore the ground.

“We own 65 percent, are managers of the joint venture and have to spend R50 million proving a gold resource to pre-feasibility study status and I’m pleased to announce that it’s going extremely well so far.”

The venture consists of an integration of White Rivers’ exploration expertise with Harmony’s commodity rights, pre-existing data and, most importantly, its capital infrastructure and mining equipment already based within the vicinity of the site.

Warburton adds: “We manage the joint venture through to a Decision to Mine, fund that exploration, and we’re now heading down the route of finalising our first major dual compliance international resource in excess of six million ounces of gold.

“The good thing about this joint venture is that if after a bankable feasibility study is conducted and it shows a very economic output and high rate of return, Harmony will then allow the use of their neighbouring installed infrastructure; their shafts, their underground workings and their treatment facilities.

“Capital is thereby reduced and mining is fast-tracked because you don’t have to put in a new shaft or build new infrastructure and this has led to Beisa being our most advanced project by a long way.”

Beisa will now lay the platform for quickened and more extensive growth towards what White Rivers is trying to achieve across the Witwatersrand Basin, as other prospective partners get their first glimpse of what the company has accomplished through its data acquisition efforts in the region.

“Mark Creasy has been self funding the company to date and as we advance some of these projects and acquire more existing drill hole data and do the feasibility studies etc, the monthly spend is going up,” Warburton says. “At some point we need to go public enabling existing shareholders to realise some of their returns on investment.

“Other joint venture partnerships will follow, where we can utilise companies’ existing, underutilised infrastructure through exploration success of neighbouring tenements.”

Once a significant gold resource on a nearby tenement can be proved, the same process as has been seen at Beisa can be applied in each of its core project areas, and the prospective relationships become even more attractive given White Rivers’ willingness to carry out the usually high-risk exploration phase.

“Once we have that joint venture in place we don’t mind spending the money on exploration because we already have some basic information from acquiring previous data,” Warburton notes. “It’s a strategy that a lot of South Africa’s major mining houses like because we reduce their expenditure and risk profile by doing so.

“Having a company that focuses on exploration with the development and production profile to follow falls in line with their thinking, while we get the benefit of using their underutilised infrastructure.”

White Rivers subsequently comprises an experienced team of geologists and mining personnel in Johannesburg to further enforce this level of quality being offered to prospective partners.

White Rivers Exploration’s profile is building steadily and significantly, and will only be compounded by the success of its Beisa project, the imminent stock exchange listing and its prominence at expos, including the recent Mining Indaba event in South Africa.

“Our first public brief was made at Indaba, 2015 and we have received a huge response from interested parties as well as from experienced industry geologists who came past our booth saying how they used to work in the area and knowing where to track down further data,” Warburton says. “Now that we’re getting into the public arena it should open the door to a lot more joint ventures.

“We are now an established company and are well resourced; technically and financially.”

The success of its partnership with Harmony will further encourage future development of the business model and Warburton now expects at least two or three more of a similar ilk to have brought projects to production phase over the next three or four years.

“We expect to have a cash flow into the company from a gold perspective and other joint venture partnerships will not be far behind,” the Chairman concludes. “Mark Creasy still holds a very firm view that the gold price will continue to rise and that we are situated in one of the richest gold endowment areas here in the Witwatersrand Basin.

“We fill a niche within South Africa where traditionally it’s been large mining houses having multiple mines and sat on a lot of ground for a long time without really thinking about utilisation or profitability.

“We’re all about making profit and are nimble enough to carry out exploration very quickly to add value to our own company, existing operations and our joint venture partners.”