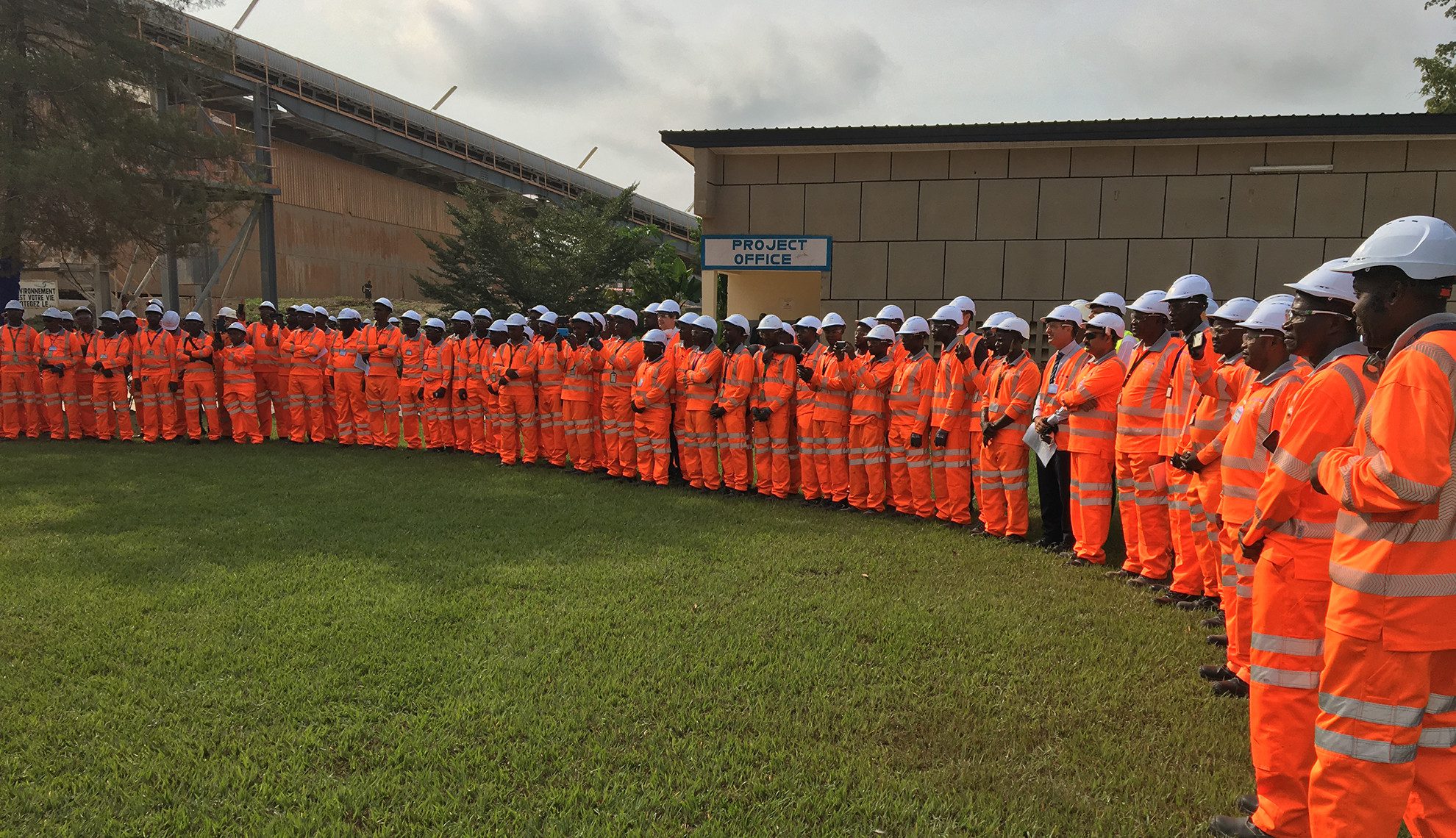 HeidelbergCement’s Cimenterie de Lukala is investing in the future of not only its plant, but also the DRC and local community in Lukala, the company nearing 100 years in operation
Writer: Tom Wadlow  |  Project Manager: Josh Mann

Around 566 million years ago, an enormous geological formation of Shisto-Limestone emerged in the territory of Mbanza-Ngungu, nestled in the west of modern-day Democratic Republic of Congo.
Home to an immense limestone deposit, it wasn’t until 1892 when field studies were carried out in the region that geologists discovered the potential to mine the resource and create cement, a building material which was becoming mainstream having been discovered earlier in the 19th century.
The nearest settlement is Lukala, 220 kilometres southwest of Kinshasa on the road to Matadi, near the Kinshasa-Matadi railway line. Today, the quarry remains the largest such reserve in the DRC, its clean and pure limestone perfectly suited to the manufacture of high-quality cement products.
Enter Cimenterie de Lukala, commonly known as CILU and a division of Germany’s HeidelbergCement Group.
Beginning exploration activities and operation of its plant in 1921, the company has emerged as one of the most emblematic organisations in the country, its reliable cement and social commitments playing a central role in the building of a nation and development of a local community.
Indeed, the DRC’s economy as a whole appears to be heading in the right direction. In 2018, it emerged from economic recession and expanded by 4.1 percent, much of this down to increasing activity in the resources sector, which will continue to provide the resource-rich nation vital revenue streams.
But it would be wrong to paint a picture of a plain sailing backdrop for companies like CILU.

“The DRC’s cement industry is very challenging,” comments Andreas Bischofberger, the firm’s Managing Director and industry veteran of more than 30 years.
“Companies are not able to operate at full capacity, largely because of illegal imports coming into the market from nearby countries which are avoiding the high port charges and other taxes which we have to pay.”
Bischofberger goes on to explain that CILU is subject to no fewer than 77 different forms of taxation, the company also mandated to cover medical, schooling and other costs of living for its employees, creating a heavy cost base which hampers its prospects of being competitive on price.
It is a state of affairs which the firm continues to actively lobby at a governmental level, with fresh elections at the end of 2018 providing a new wave of optimism.
“Despite what I call the dark side of the cement industry here, I am very positive about the overall picture,” Bischofberger continues. “We have an extremely low cement consumption per capita in the country, around 13 to 15 kilos, which is far lower than some neighbouring countries that typically have around 80 to 85 kilos of cement per capita.
“There is therefore a massive opportunity to push these numbers up and build up the country. The new government is committing to more projects, and this will only help consumption to increase – we are here to supply any growth in demand.”
The Managing Director arrived at CILU a little over two years ago. Always eager to travel and work abroad, his 30-year industry CV has covered many countries in Europe and the Americas, the venture into Africa being the latest chapter in his story.
“I couldn’t have foreseen my journey into the DRC, but this is how it happens in the industry,” Bischofberger says. “When you work on very large projects or assignments, once they are completed you find yourself on the move again.
“I was in Switzerland and overnight I got the call to work in Ivory Coast, so that was my first venture into Africa, and once that assignment had finished, I moved into Tanzania before heading back to Switzerland. Shortly after that, a Heidelberg contact in Tanzania opened up the opportunity to head up the DRC business, and following an interview in Germany, here I am!
“Every country is different, and I very much enjoy being here and working with the people of Lukala. The work is rewarding and challenging, but I wouldn’t have it any other way.”
Winning on quality
Bischofberger will lead CILU into its centenary year in 2021, the landmark anniversary highlighting the company’s durability and stature within the DRC.
Its major advantage over the illegal import trade is its location and production of a superior quality product, CILU cement being known all over the country, much like how vacuum cleaners are referred to as Hoovers and jet baths Jacuzzis.
“It is fair to say that the DRC was built from CILU cement,” Bischofberger adds. “We will celebrate the 100-year event with our employees and want to thank our customers for their business and loyalty. We want everyone to know that CILU, together with HeidelbergCement, is a reliable business partner for the future.
“But being in business for 100 years does not guarantee you will be here for another 100 years. Three years ago, around the time I joined, we were facing such an uphill battle to remain operational and sustainable. We must always stay on our toes and never be complacent in this market.”
Today the company employs around 150 staff and supports many indirect jobs spanning customs clearance, security and quarry operations.
Its three major product lines are Portland cement (32.5R and 42.5R), Calcilu and CalciluAgro, all of which are above local and imported standards and being produced in growing quantities, the Managing Director expecting further growth in output this year.
“The cement business is destined for a long duration,” Bischofberger adds, paying tribute to the ongoing commitment of its partners and suppliers.
“Therefore, CILU is interested in developing even stronger supplier relationships that last for many years with both local and international companies. Such partnerships work both ways, and it is critical we continue to support each other.”
Parent company HeidelbergCement has also invested in the long term, providing funding for a sweeping series of upgrades which has effectively created a brand-new plant at Lukala.
This includes installation of a new raw material crusher, preheater, kiln, cooler, cement mill and dispatch facility, all fitted with state-of-the-art equipment and backed up by expertise, training and remote operation capabilities from Germany.
The process has been three years in the making and is set to deliver enormous benefits to the CILU operation for years to come.
For Bischofberger, equipment reliability is a game-changer, as the company can seriously reduce the number of breakdowns and downtime, tighten up on costs and compete even more strongly in the DRC market.
“Fuel is another area where we are benefitting,” he adds. “Not only are we more energy efficient, we are now able to look into many alternative fuel options away from coal such as biowaste, palm kernels, sawdust, plastic waste and biofuels, waste oil and more. We have the potential to provide a sustainable knock-on effect by providing a recycling service for other industries and consumers.
“These various projects have cost significant sums – the industry is capital intensive, but that means we are here for the long haul and want to deliver value on that investment, not just for the company but for the country and local community around us. We are built to last, as the saying goes.”

“Despite what I call the dark side of the cement industry here, I am very positive about the overall picture. We have an extremely low cement consumption per capita in the country, around 13 to 15 kilos, which is far lower than some neighbouring countries that typically have around 80 to 85 kilos of cement per capita”

Building futures
And this gets to the crux of why Bischofberger and CILU are here.
Of course, functioning as a profitable enterprise, contributing taxes and supplying nationwide construction endeavours form a large part of the organisation’s raison d’être, but its purpose stretches far beyond this.
In Lukala, CILU is the sole significant employer, and most employees spend their entire working life at the plant, their quality of living also intertwined with the activities of the company in a number of other ways.
It stands as vital pillar in the community, not least in the area of education, where it supports a 700-pupil school which has been named among the best in the whole of the DRC.
The firm is also sponsoring the training of two student teachers from a neighbouring village.
Further, CILU supports a stadium for sport activities, a local music band and a foundation run by local nuns.
Among other projects spearheaded are plans for a caterpillar farm (this is a DRC delicacy), a fish farm and a reforestation nursery.
Recently CILU has built toilets and a parking lot serving Lukala’s local market, while a pedestrian bridge is currently under construction providing a safe crossing of the creek. In September 2019, the company began planting fields of elephant grass as part of a biofuel experiment to help provide sustainable fuel for the kiln operations.
“For me, one of the most rewarding and important aspects of what we are doing is involving the community of Lukala,” Bischofberger states proudly.
“CILU is a big contributor both economically and socially to the area, and many people depend on us to sustain their livelihoods, but I want to involve them more. We want people here not just to be reliant on CILU, but to help build their own future, and many of our projects are designed with this in mind.”
Maintaining and growing a profitable, sustainable commercial operation will help the Managing Director and CILU to continue building socioeconomic opportunity in the local area, Bischofberger outlining four very clear objectives for the year ahead which will enable it to do so.
These include providing an outstanding customer service, supporting the government with infrastructure projects, maintaining consistent high quality of output, and reaching every corner of the country with CILU cement.
Bischofberger concludes: “Considering the development the country still needs, CILU is well prepared to provide strong support and quality products. There is no need for cheap cement imports that harm the industry, don’t pay taxes and don’t support the labour market.
“As more projects get started, I am optimistic that the future for CILU and the country will be more prosperous. CILU is a connected partner for the community that is helping to bring hope and an outlook for the future for many people.”