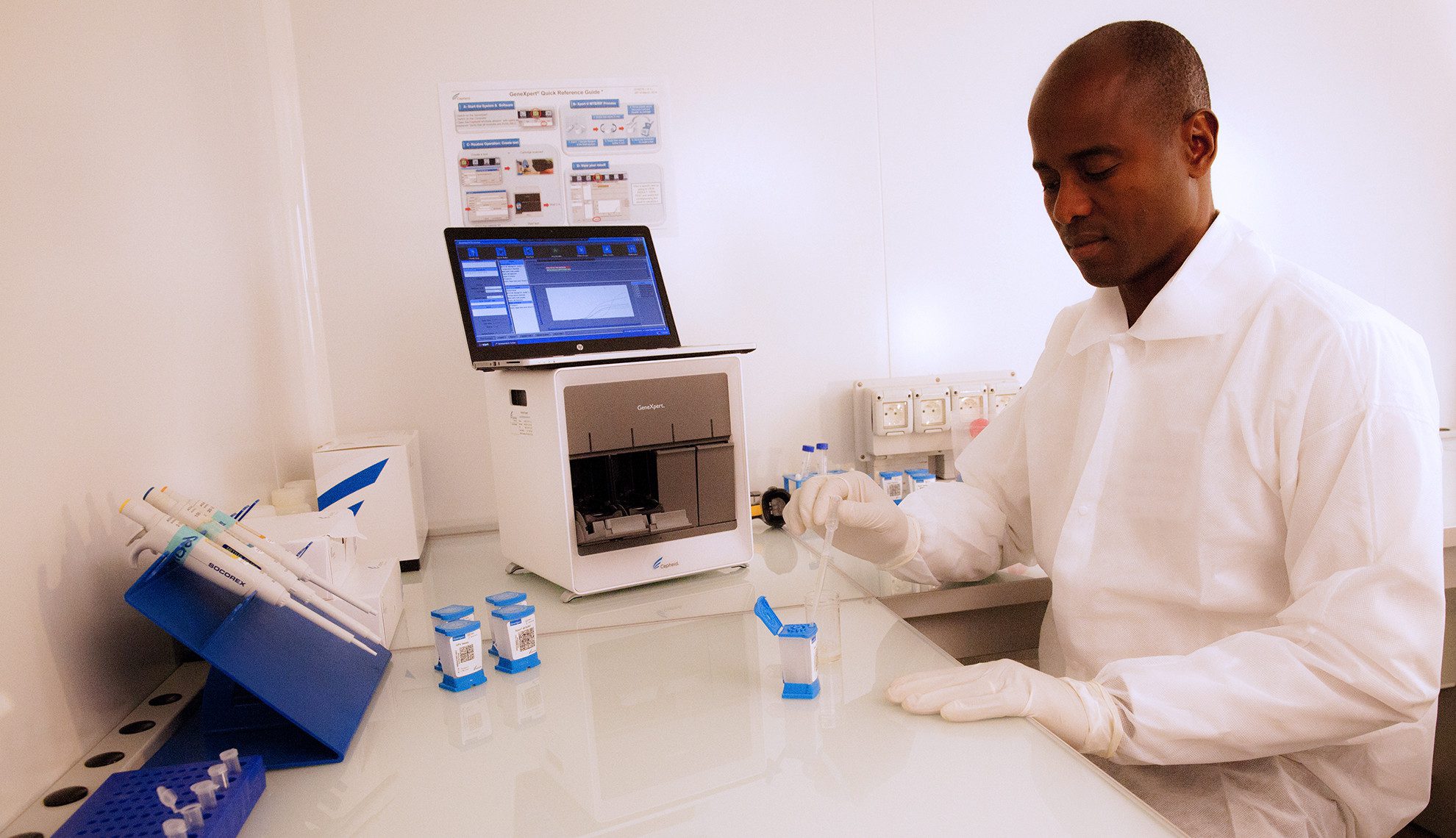 Cepheid is helping to deliver lifesaving diagnostic solutions across Africa, its GeneXpert System widely recognised as a game-changer in the fight against tuberculosis

Tuberculosis (TB) is one the world’s top 10 causes of death.

In 2017 10 million people fell ill with TB, a million of these being children, while 1.6 million died from the disease.

Transmitting from person to person through the air, it only takes the inhalation of a few germs for someone to become infected, and around a quarter of the world’s population have what is known as latent TB, their chances of falling ill with the disease standing at anywhere between five and 15 percent.

Tuberculosis is also becoming more difficult to eradicate. Multidrug-resistant TB (MDR-TB) remains a public health crisis and a health security threat, the World Health Organization (WHO) estimating that in 2017 there were 558,000 new cases with resistance to rifampicin, the most effective first-line drug.

It is one of healthcare’s greatest conundrums, and something the United Nations through its Sustainable Development Goals is treating extremely seriously. By 2030, for example, it wants to end the TB epidemic.

And progress is being made. Between 2000 and 2017 some 54 million lives were saved through diagnosis and treatment, the vast majority of these lifesaving activities taking place in developing nations where more than 95 percent of TB cases are found.

In Africa, the disease is especially potent. It is South Africa’s single greatest killer, taking the lives of more than 300 people in the country every day, a problem exacerbated by the HIV epidemic (80 percent of people who died in 2016 were also infected with HIV).

“Tuberculosis is the leading cause of death from a single infectious agent, ranking above HIV and AIDS,” comments Rika Dutau, Vice President and General Manager of EMEA Commercial Operations for molecular diagnostics pioneer Cepheid.

“In 2016, 2.5 million people fell ill with TB in the African region, accounting for a quarter of new TB cases worldwide.”

Cepheid is determined to wipe out the disease, 2020 marking the 10-year anniversary of its official Commitment to TB.

“In 2010, Cepheid introduced our first molecular TB test, Xpert MTB/RIF, and the WHO endorsed it as a game-changer for TB and MDR-TB care delivery,” Dutau continues.

“South Africa was the first community to commit to universal screening using the GeneXpert System, beginning with an initial pilot in 2011 and moving to a high-burden area roll-out in 2012 and full roll-out in 2014.”

GeneXpert provides rapid molecular testing as a screening tool for many infectious diseases and hospital acquired infections. In the case of TB, the solution allows medical providers to identify and treat the condition early, save lives and reduce transmission.

In terms of the company’s physical establishment on the continent, Cepheid set up a direct presence in South Africa in 2012, the company currently expanding its presence across Africa to better serve the needs of communities which suffer from TB and other molecular diseases.

Plans are also afoot to build a direct presence in Zimbabwe, the firm looking to commence local sales, service and marketing operations in other parts of Africa from 2020 onwards.

“Service delivery is challenging across the continent of Africa,” adds Dutau.

“High rates of unemployment coupled with huge demands on families and extended families to provide for basic needs puts tremendous stress on everyday life. In many areas it is challenging to get to medical services and difficult to attend multiple appointments for different services.

“The GeneXpert platform helps to enhance the delivery of healthcare by providing a tool that facilitates rapid diagnosis, enabling treatment and counselling to be provided at a single visit, thereby reducing loss to follow up and improved patient care.”

The undoubted success of GeneXpert does not mean that Cepheid is standing still, however.

Always striving to improve the performance of its technologies and testing solutions, the firm has been busy introducing enhanced versions of its diagnosis tests in recent years.

A pertinent example of this came in 2017 when it introduced its Xpert MTB/RIF Ultra, an improved version of its TB test thanks to increased sensitivity for the detection of Mycobacterium tuberculosis in specimens with low numbers of bacilli.

It has been particularly effective in pediatric specimens, extra-pulmonary specimens and smear-negative, culture-positive specimens, such as those from people with HIV co-infection.

Dutau adds: “Dr Mario Raviglione, the Director of the WHO Global TB Programme, said that innovations in technology and the strong science behind it have brought significant breakthroughs in TB diagnosis over the last 10 years.

“He also said that achieving the targets in the WHO End TB Strategy necessitates urgent scale-up of these innovations at all levels and in all settings for early and rapid diagnosis of TB and rifampicin resistance in all persons with signs or symptoms of TB.

To date, more than 10,000 GeneXpert Systems have been installed in low- and middle-income countries around the world, mainly focussing on the diagnosis of TB.

However, because all of Cepheid’s tests run from the same platform, the already installed systems can also be used to run diagnostics on a range of other conditions. There are 27 in total, from healthcare-related infections through to women’s health, sexual health and virology.

This is helping to improve access to lifesaving diagnosis and treatment for many African citizens, contributing towards global goals relating to the likes of HIV and TB.

“Global health organisations and other stakeholders have been encouraging and supporting a more integrated, efficient use of diagnostics to work toward WHO targets for eliminating diseases such as HIV, tuberculosis, HCV and cervical cancer,” says Dutau.

“Control of global health threats are often hampered when testing is performed in centralised labs far from where patients live. Patients commonly travel long distances for diagnostic testing, or their samples must be transported, which may delay test results and impact patient care. Results may even get lost or never make it back to the patients.”

Cepheid’s work is reducing these risks by bringing services closer to communities, another major breakthrough coming in July 2018 when the company announced a reduction in cost of several testing procedures.

This fell under the HBDC Access Program, which saw Cepheid lower the price of Xpert tests used for molecular diagnosis of HIV, viral hepatitis (HCV & HBV) and human papilloma virus (HPV), to make the tests more accessible to lower-income countries.

Another area of focus for Cepheid in Africa centres around the fight against cancer.

Here, the company is invested in two major projects, the first being to evaluate the effectiveness of a breast cancer diagnostic process (Xpert Breast Cancer STRAT4) on the GeneXpert System. If it can prove that this is a more effective method than what is currently commonplace across African countries, then it could become another game-changing moment.

“These studies will assist with the selection of a subgroup of cancer patients for targeted treatment,” says Dutau. “Breast cancer is one of the most common cancers in women worldwide and is the most common cause of cancer-related deaths among women in developing countries.”

The second project relates to cervical cancer, in particular its association with HPV.

“Every year, cervical cancer associated with HPV infection causes over 250,000 deaths,” Dutau contines. “Some 83 percent of cases are in resource-limited countries and it is the most common cancer in Sub-Saharan Africa.

“Cepheid is initiating a number of studies across Africa looking at the feasibility of implementing cervical cancer screening on existing GeneXpert platforms using self-collected and clinician collected samples, enabling short turn-around and one-stop test and treat programmes to avoid the complexities of re-calling patients who test positive.”

As the company continues to grow its physical presence across the region and introduce pioneering diagnosis methods for some of Africa’s most potent illnesses, hope of attaining the various Sustainable Development Goals relating to disease will doubtlessly grow.

Cepheid, it is clear to see, is applying an age-old saying to lifesaving effect – that prevention is better than cure.