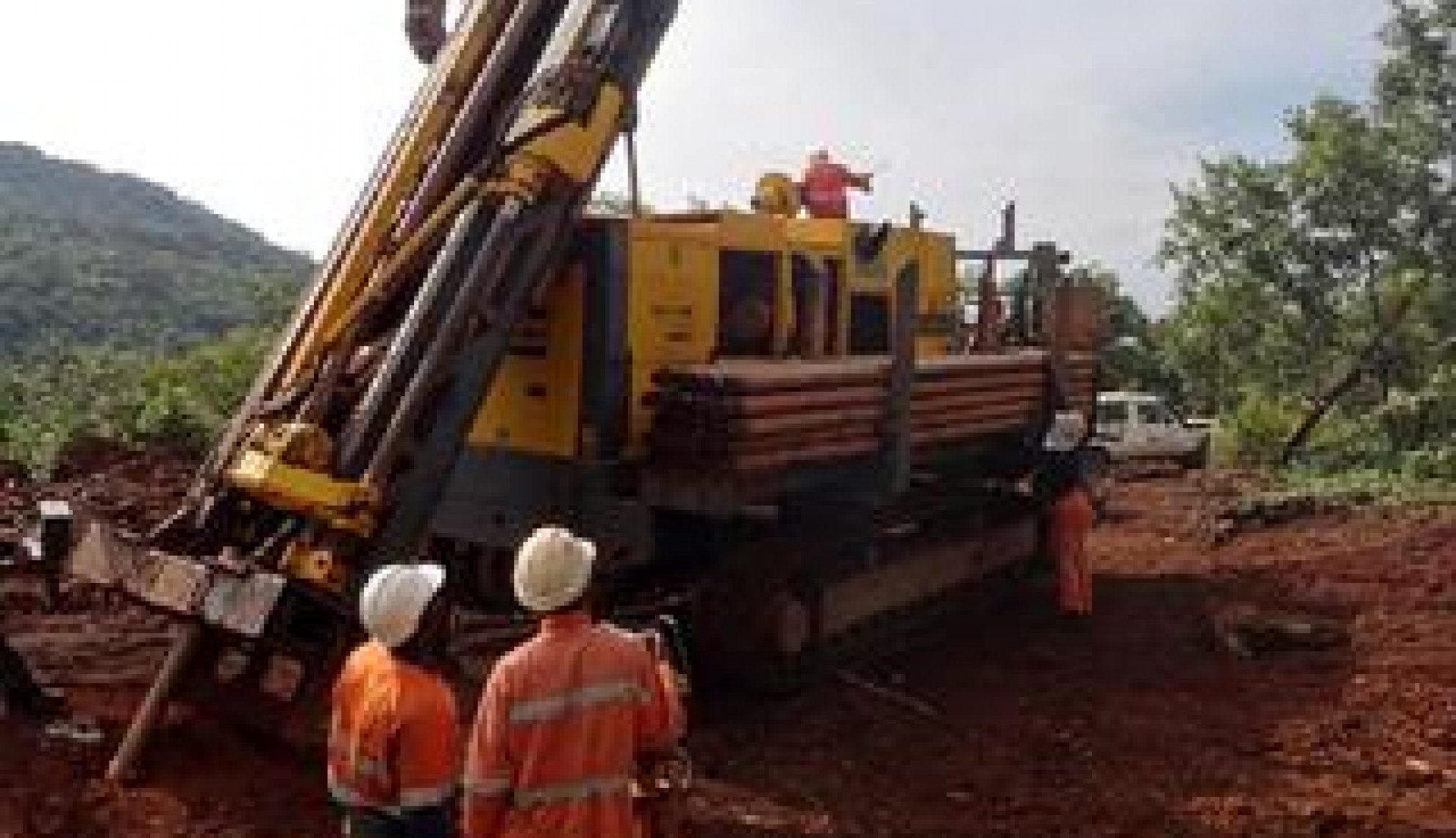 Thrill of the drill

Reverse circulation drilling specialist SBD Guinea has worked on some of West Africa’s most significant and exciting exploration projects and operating mines.

Western Australia-based drilling contractor SBD Guinea (‘SBDG’) has had a presence in West Africa for well over a decade. In recent years, West African countries have increased exploration, production and export of minerals including gold, iron ore and bauxite and SBDG has capitalised on this expansion.

SBDG’s corporate base is in West Perth. It has drilling operations in Guinea and Senegal and its African corporate offi ce is in Conakry, Guinea. It has worked with the likes of Rio Tinto, Anglo American, BHP Billiton, Bellzone, and Teranga Gold.

Founded by Executive Director Graham Keys, SBDG was formed in 2001 and is a recognised industry leader in the African RC drilling market. It has been heavily involved in Rio Tinto’s Simandou project, a world-class Iron ore mining project located in the south-east of Guinea.

“Simandou was our flagship and core operation,” says SBDG General Manager Matt Franklyn. “We operated RC, diamond and maintenance contracts there between 2001 and 2012.

“Simandou has the potential to be a globally signifi cant mine. The construction of the mine and related infrastructure will positively impact on the Guinean economy and people. It was exciting to be involved in the development of a resource of this magnitude.”

Since 2001 the number of mining companies and contractors in Guinea “has increased dramatically,” he says.

“When we first entered the African market there weren’t a lot of Western companies in West Africa. In the mid 2000’s more started to enter the region, mostly Australian and Canadian miners. These companies are now a large employer in the nations In which they operate. It’s pleasing to see the social development initiatives mining companies are increasingly engaging in.”

SBDG has also been heavily involved in Iron ore group Bellzone Mining’s Kalia project in Guinea and at their operating Forecariah mine. The Kalia project is Bellzone’s flagship operation. SBDG completed all RC exploration at Kalia, as well as Grade Control drilling.

“Kalia and Simandou are two of the largest iron ore projects in West Africa,” says Franklyn. “Simandou will be the largest integrated iron ore mine and infrastructure project ever developed in Africa, producing 95Mt/y at full production. Kalia has a JORC compliant resource in excess of six billion tonnes. Kalia and Simandou still require the associated infrastructure in order to commence production and export. This should occur in the coming years, and will lead to a surge in the number of Guineans in the workforce.

“We have also worked across the border in Senegal for Teranga Gold at their Sabodala gold mine. We drilled over 80,000m of RC at Sabodala, comprising exploration drilling as well as 300m pre-collars for Diamond rigs in the operating open pit Sabodala mine.

“The Bellzone and Teranga jobs started in early 2010. They ran for three years up until 2013. I think the fact that the contracts we’ve operated have been a minimum of three years speaks volumes for the quality of service we provide.”

SBDG focuses on first class safety management system, and the employment of experienced, highly skilled personnel. They are key differentiators in a competitive market. “We combine RC and mechanical expertise with a critical focus on safety, environmental conservation and cultural development programmes,” says Franklyn. “And we provide all clients with a high level of service and a commitment, working with them to safely achieve their exploration targets.”

SBDG own and operate a fleet of track mounted Atlas Copco Explorac 220 RC rigs. The Explorac sets itself apart from its rivals through its safety features. “All of our rigs are equipped with automated rod handling systems, fire suppression, on board sampling units, under body carbon spillage trays, and working at heights safety systems,” says Franklyn, who highlighted the fact that the control panel can be set up at a distance of 10m from the drill rig, giving the driller an unimpaired view of the crew and operation. Similarly, the rod handler joystick can be situated 15m from the rig, placing the operator out of the ‘line of fire’. These features are of critical importance in minimising the risk of an incident caused by a falling rod string. The Explorac 220 RC is powered by an electronically governed Caterpillar C18 engine with low emission outputs.

“They’re more fuel efficient than our rivals,” says Franklyn. “We estimate they use approximately 30 percent less fuel than competitors’ specialist RC rigs, while offering comparable performance. With the current increased focus on cost control, this is a significant advantage. Importantly the smaller size of the engine and body of the Explorac doesn’t detract from the productivity. It can still drill in excess of 400m. Also, the air capacity of the Explorac and auxiliary compressor and booster units we operate means we are able to produce a quality, dry sample. Quality samples are crucial to our clients and something we pride ourselves on delivering.
“The compact manufacturing of the Explorac is similarly an advantage. Combined with the fact our rigs are track mounted, this means we are able to operate in mountainous terrain with ease. The design and mobility of the Explorac also makes it ideally suited to infill and grade control programs, where setting up quickly between holes is vital.”

Exploration contractors in Africa and worldwide currently are feeling “the pinch” due to reduced exploration budgets by major and junior mining companies amid lower commodity prices.

Resources companies have reined in expenditure in the current environment. Juniors are currently having difficulty accessing capital, says Franklyn.

“Major miners, on the other hand, are refocusing spending on mines already in production rather than on exploration efforts, which they can cut without any immediate effect on revenue,” he explains. For that reason SBDG is undergoing “a rebuilding phase”.

The aim is to “make ourselves known to more companies, and emphasise the range of services we can supply at all stages of the mining cycle” and “to capitalise on the long term potential of Africa”.

And there is plenty of potential. “We see the slowdown as a minor phase. As investor confidence returns and West African nations continue on their path of economic and social development, we see a massive opportunity in this underexplored, under-developed part of the continent.”

So what does SBDG have to offer prospective clients? An intimate knowledge of working in remote African locations, the safest, most reliable crew and equipment available and a critical spares list. “It’s a schedule of essential parts which, if damaged, can cause a breakdown” says Franklyn. “We have spares of these items in country, on the shelf, at all times. We currently have over $1 million worth of parts in country. This system is designed to maximise utilisation of our rigs and equipment.”

SBDG is all set for a bright future on the African continent.

“We are in West Africa for the long haul. We’re excited to be part of the mining industry assisting in the development of crucial infrastructure and opportunities for West African nations and their people. We have the equipment, commitment to safety, crew and key African exploration experience to thrive for decades to come.”