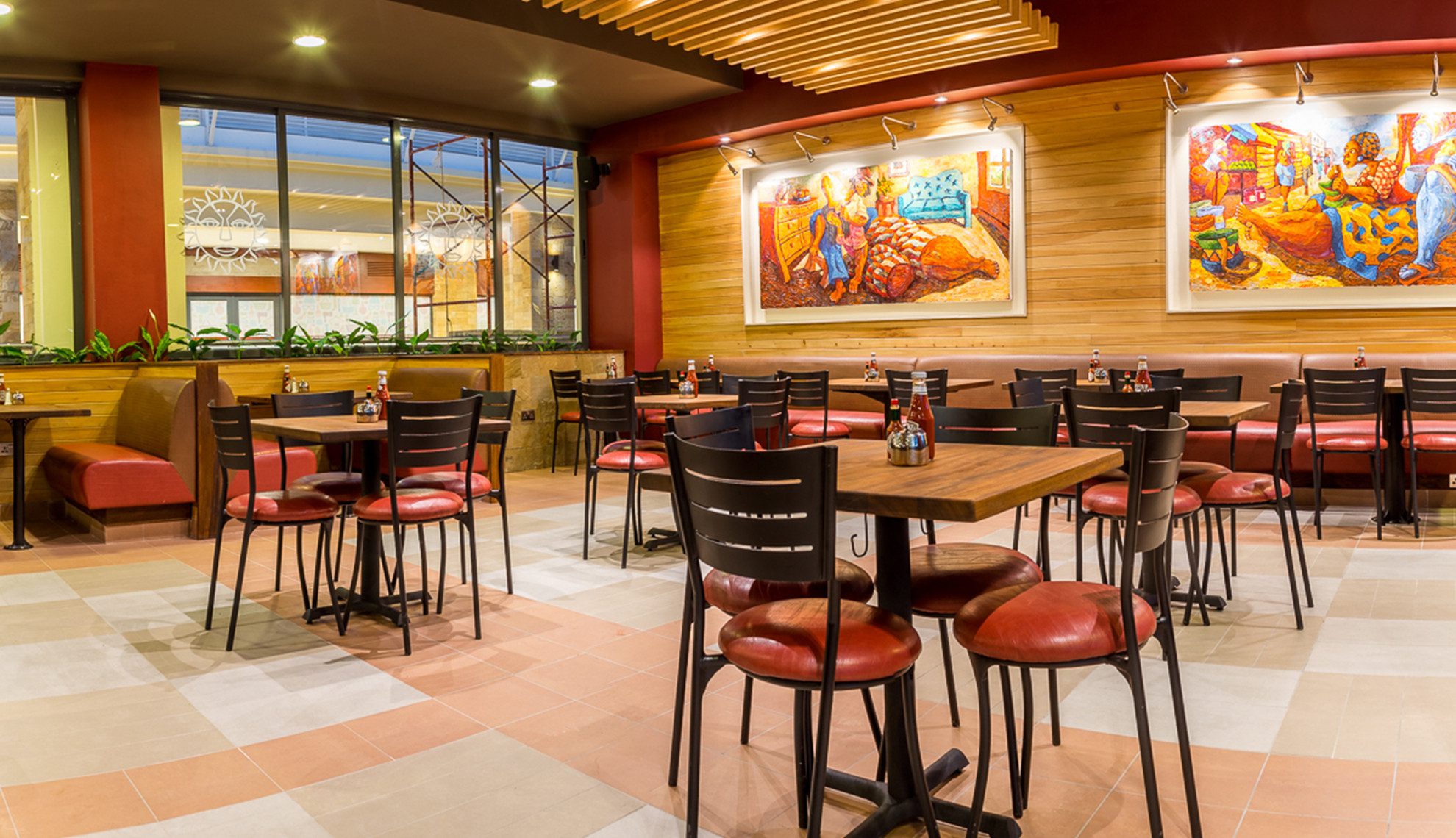 A Tale of Transformation

Having received a new lease of life, East Africa’s most successful coffeehouse chain is set to embark on an exciting new chapter as it turns 20 years old

East Africa is a region enrobed with optimism.

Real GDP across its 13 countries rose by an average of 5.7 percent in 2018 according to the World Bank, a trajectory that is expected to remain strong with forecasts of 5.9 percent for 2019 and 6.1 percent for 2020.

Combine this with a population that is expected to double in size and reach 711 million by 2050, overtaking the entirety of Europe in the process, and it’s easy to see why an aura of excitement surrounds the region as it gears up to meet the associated challenges and opportunities.

“Our industry, like many others, is on the up,” states Steve Carlyon, referring to the thriving food and beverage scene.

“Casual diners have become community hubs, meeting places for friends, families, business meetings, dates, you name it. F&B is about more than just providing great food. It’s about providing destinations to celebrate social occasions, and the appetite to be spoilt in a culinary sense is certainly growing.”

One of the continent’s entrepreneurial success stories, the enterprise has grown exponentially since introducing its gourmet café culture in 1999, described by Carlyon as Java Love, now operating 75 outlets across Kenya, Uganda and Rwanda.

Yet despite this rapid expansion, Java House is only beginning to dive beneath the surface of its true potential, especially in its commissary food production unit.

“For people like myself who’ve been lucky enough to travel and experience different hospitalities and cuisines, it’s easy to see that we’ve got a fantastic opportunity to influence the whole region,” Carlyon affirms.

Touching upon Java House’s history with Carlyon, he is quick to reveal that the company has recently been overcoming numerous hurdles, views reiterated by Paul Smith.

“I love the coffee business. It’s an amazing sector to be involved in with its ability to connect people in different ways,” Smith, the CEO, states. “I think Java has always embodied this, despite challenges surrounding its ownership, uncertainty and a lack of adequate modernisation.

“We’ve spent the past two years reenergising the foundations of the business and are now in a good place to begin the next fruitful chapter in the company’s story.”

Sweeping changes have been implemented across the board, from a greater emphasis on brand development with the launch of a revamped logo to expanded digital media campaigns and numerous reimaging projects at many of the firm’s famed restaurants.

Arguably the most significant changes, however, continue to come from behind the scenes, evidenced by the planned implementation of a state-of-the-art, company-wide enterprise resource planning (ERP) system.

“It’s almost felt like walking into a toy shop as a child and buying all the toys you’ve ever wanted,” muses Carlyon.

“I see myself as a bit of a measurement freak, and that’s exactly what the ERP will allow us to do – measure the value and performance of every function of the business, running it with incredible transparency while enabling efficiency optimisations.

“Two years ago, the company would create a product, and it would look okay and taste okay, but underpinning that, nobody actually knew the cost of producing it. We’ve addressed this temporarily using excel spreadsheets and other tools, but the level of data capture and analysis expertise hasn’t been there – something that the ERP will soon address.”

Carlyon continues: “Essentially, we’ll be taking a 3,700-square-metre brownfield site and transforming it into an 8,000-square-metre world-class consolidated manufacturing facility, boosting our capacity and broadening the potential and reach of our products.”

From ideas to innovation

Process developments are coming thick and fast across all aspects of the business as Java House undergoes what can only be described as a major transformation.

Yet these changes will not only be of benefit to Java House, evidenced by the alternate logistics-driven initiative currently being pursued by the business in partnership with an international logistics partner.

“The board took the decision a year ago to outsource our logistics and distribution function – this involved launching a tender, scoping warehousing, distribution and fleet as the three elements Java required assistance with,” explains Carlyon.

“There were many reasons behind this, including the fact that the trucks that we inherited two years ago were approximately seven years old. When you consider the amount of mileage that these vehicles would have driven, combined with a lack of maintenance, repairs and absence of on-board cooling, for food safety, we recognised that the fleet needed to be replaced.

“This collaboration is exciting,” Carlyon continues, “as it has undoubtedly provided us with a cost saving that we will benefit from.

“However, due to the fact that nobody was currently doing what we were asking them to do – manage our distribution and warehousing – we also identified an opportunity, an opportunity that has taken the form of Foodscape.”

Described by the GM as an alliance-driven initiative, Foodscape will see the two companies develop a fleet of co-branded trucks, creating a new business division that will not only handle Java House’s distribution and warehousing requirements, but equally those of third-party businesses.

“Other F&B players can use Foodscape’s warehousing instead of investing in their own facilities and leverage our distribution network without having to buy trucks,” Carlyon affirms. “As a result, we’re expecting this to become another firm business value stream over the course of the next five years.”

Readily positioning itself as a flagship for industry-wide success through Foodscape, Java House is equally motivating mutual benefit for the F&B industry in other ways, namely via the recent transformation of its procurement function, as an example, now working directly with grassroots potato farmers across East Africa.

“What we’ve done is agitate the supply chain,” Smith reveals. “The issue we encountered in doing so is the fact that these potato farmers work in an environment where the climate constantly plays around. As such there is limited continuity in price and they find it difficult to secure funding from the banks.

“To overcome this, we went to one of our major partner banks, who agreed to lend the farmers money on the basis that we guarantee a purchasing price.

“What you end up with is a three-way win – the farmers sell their products for a fixed price, the banks know they’ll get a return on their investment, and we’re able to stabilise our own costs by avoiding alternate purchasing channels.”

This initiative was motivated at a supplier conference that Java funds, inviting suppliers to come and network with each other, brainstorm and find solutions to common pain-points while creating a community between small and large manufacturers alike.

“The main backbone of these conferences initiated our Supplier Code of Conduct, something that was introduced 18 months ago to help eliminate and reduce the risk of behaviour you would condemn,” Smith continues.

“We have also added a whistle-blower line, independently managed by an outside company that is both active and importantly instils confidence about the way that we want this business to be run – in a responsible manner with what we call Java integrity.”

This is not all for Java moving forward, however.

Asked about any major investments alongside the development of a new commissary, ERP system and Foodscape, both Smith and Carlyon point to Kukito – an alternate quick service restaurant brand set to be launched by the firm in the second half of September.

“It was clear that there was space in the Kenyan market for a truly locally grown and African based QSR brand, and after some research we discovered the gap,” says Smith. “At the same time Steve was having some interesting conversations.

“I was on the third hole of golf course with a friend of mine who happened to be the Operations Director of KenChic, one of the biggest chicken players in Kenya,” reveals Carlyon.

“We were talking about how his plant was capable of more and how we could drive prices down through volume, and as a result the idea of Kukito was born – we saw the opportunity for both our businesses to benefit.

“That’s the thinking behind Kukito – it’s also a brand that’s designed to be internationalised.”

Equally Java House is being approached from numerous countries, be it Dubai, Oman, India, South Africa and China, with entrepreneurs looking to franchise the business.

Having carefully developed an extensive, in-depth franchising management programme, Java House is gearing up for all its brands to take major steps into new global markets – a fourth and final goal of the company.

“I intend to do a lot more fishing,” Smith jests, when asked about his priorities moving forward. “But in all seriousness, with the optimisation of our operations, development of new business opportunities and huge changes taking place alongside the celebrations of our 20th anniversary, we’re more than optimistic.

“I’ve worked all over the world and I have to say that the guys here are making it easy for me – they’re the best talent I’ve ever come across in terms of their thinking, their understanding, their entrepreneurialism, their commercialism.

“They’re great people, and they’re going to be crucial in helping us to achieve great things. I’m proud of them all.”