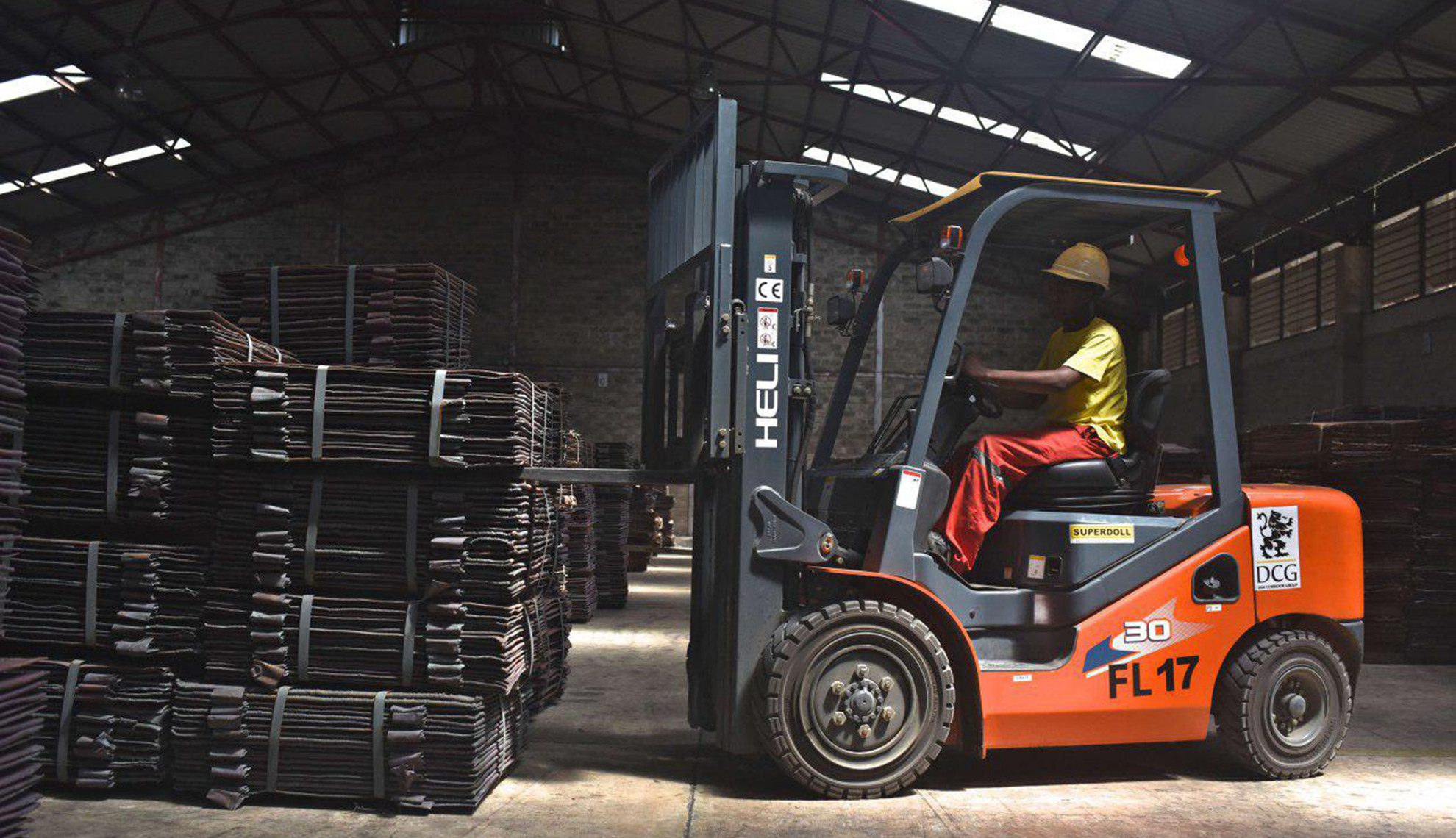 The port of Dar es Salaam (DSM) – on the shores of Tanzania’s capital city and conduit for 95 percent of the country’s trade.

It is among the largest ports on Africa’s east coast, owing its development to German colonialists in the second half of the 19th century, and today provides vital access to six landlocked neighbours in the form of Malawi, Zambia, Burundi, Rwanda, Uganda and Eastern DRC.

This is a sizable operation, and one that requires a multitude of parties to ensure cargo is shipped in and out efficiently.

DSM Corridor Group (DCG) is one such company. Operating several facilities both portside and inland, it has won a string of awards for its cargo handling services and is recognised as a safe pair hands for traders operating through DSM port.

It was in 2013 that Jesper Sorensen, DCG’s current CEO, first came into contact with Tanzania’s trading gateway.

Having worked in the country from 2009 on natural resource and agriculture projects, he began to appreciate the importance of efficient logistics to the overall financial viability of such industrial endeavours.

“I obtained an MSc in shipping and logistics in 2013 at Southampton’s Solent University in the UK and wrote my dissertation on efficiency measures in and around the port of DSM and their cost implications,” Sorensen recalls.

“I did my research with Tanzania Ports Authority but part of it was to interview private sector shipping and logistics companies with stakes in the port. This is how I came across DCG.

“The ambitions, views and vision of the company’s management with regards to logistics management coincided with my own and, combined with the potential and prospect of the port of DSM, this was a natural fit and I never looked back.”

An industry companion
DCG began life long before Sorensen discovered it in 2013.

The company started out in 2004 as an operation dedicated to discharging bulk vessels on the quayside of DSM port, and has since expanded its scale and scope to the betterment of many industrial players with interests in Tanzania.

The completion of a state-of-the-art, humidity-controlled and conveyor-driven dry bulk terminal in 2011 was a particular turning point.

Connected to DCG’s quayside bagging facilities, it has been a game changer for the regional fertiliser industry both in terms of volume and, crucially, time. The discharge rates of a fertiliser vessel increased from around 1,500 tonnes per day (quayside bagging operation) to a guaranteed 3,000 tonnes bulk discharge operation, with lay time reduced by more than 50 percent. DCG also invested in specialist tipper trucks to oversee transport from port to terminal.

“Today we can achieve discharge rates above 5,000 tonnes per day,” Sorensen says. “Our bagging machines produce 2,000 tonnes of bags per day in, five, 10, 25 or 50 kilo bags. We can offer our clients an end to end solution where we also transport the cargo to its final destination using both road and rail as modes of transport.”

This all-encompassing offering includes in-house cargo clearing, while the firm also has a custom bonded facility where transit cargoes are handled, strategically located close to DSM port and fitted with a TAZARA rail siding.

This ties into another key line of business for the company, namely with clients connected to the mining industry.

Export cargoes handled include copper products, cobalt, manganese and cobalt hydroxides, products which are stored in DCG’s 7,000 square metre warehouse facility as well as stripping, stuffing and storing containers in its yard.

Sorensen adds: “Taking the strategic location into consideration, as well as the efficiency of cargo handling and the rail siding, DCG is regarded as one of the preferred cargo handlers in Dar es Salaam for mining products and volume-wise we are one of the biggest handlers of copper.”

Award-winning team
Perhaps the greatest testament to DCG’s ongoing drive to achieve operational excellence is the string of awards it has won over recent years.

In 2016, for example, the company was recognised with a Women in Transport Award for Best Port Operator or Terminal in Africa, adding to success at the Seatrade Maritime Awards and three awards attained from the Global Ports Forum in four years.

“The Global Ports Forum Award for Terminal of the Year 2019 was special in the sense that it was awarded on the basis of our recent involvement in transporting cargo via the TAZARA railway from Dar es Salaam to Kapiri-Mposhi in Zambia, and vice versa,” adds Sorenson, who is quick to praise his team of dedicated employees.

“In our quality statement it mentions that staff are our most important asset,” he continues, “and we can confidently say that our employees are the main reason for the success that we have achieved over the years.”

“We are interested in developing and furthering their careers with us and provide various internal and external training to support that, including promoting awareness of workplace harassment through our Yellow Card initiative,” he says.

“We have also implemented systems such as grievance forms and suggestion boxes to ensure that any concerns are addressed and attended to immediately, while our open-door policy means that there are no barriers for staff to communicate at all levels.”

Health and safety is another central element to staff wellbeing. This is evidenced at DCG through initiatives to comply with the international standards for occupational health and safety (ISO 45001:2018) and the environment (ISO 14001:2015).

The firm is further implementing 10 principles in the areas of human rights, labour, the environment and anti-corruption under the UN Global Compact framework for businesses.

Social events like football tournaments are also supported, the company’s team bringing back numerous trophies from its endeavours.

Looking ahead
This all adds up to a loyal cohort of workers, many of them enjoying an ongoing service of 10 or more years and building up a formidable pool of industry knowledge in the process.

Such experience will no doubt serve DCG well as it looks to build on its first 15 years of successful operation. With an eye on the future, Sorensen outlines several priorities in terms of laying the foundations for the company’s next growth phase, which is expected to see a doubling of revenue inside four years.

“We are building further capacity in CACC, increasing efficiencies on the turnaround time of the trains, adding trains and also expanding the capacity of our DCG terminals,” he says. “Another major priority is to add to our existing ISO certifications of 9001 and 14001 by obtaining the 45001 in 2019.

“In order to successfully cope with the growth, we will increasingly become a more process driven company governed by our integrated management system. We will, via that system, ensure better internal communication and more efficient operating procedures which again will enable us to create tools to react better to dynamics in both the internal and external environments.”

The end result will be a superior service for customers. This in turn will encourage more business through the port of Dar es Salaam, which itself is also undergoing something of a growth phase thanks to a World Bank-sponsored project to deepen seven dredging births to 14.5 metres.

“This will enable larger vessels to call the port,” Sorensen adds, “and the government is also keen on utilising the rail to a greater extent.”

And it is this mode of transport which the CEO believes will form a central part of Tanzania’s freight future.

He concludes: “This goes hand in hand with DCG’s strategy of shifting cargo transport from road to rail. Rail transport is traditionally a more reliable, secure and efficient way of transferring cargoes across hinterlands, and our ultimate purpose of opting for rail is to significantly reduce the logistics costs which are traditionally high in this part of the world.”