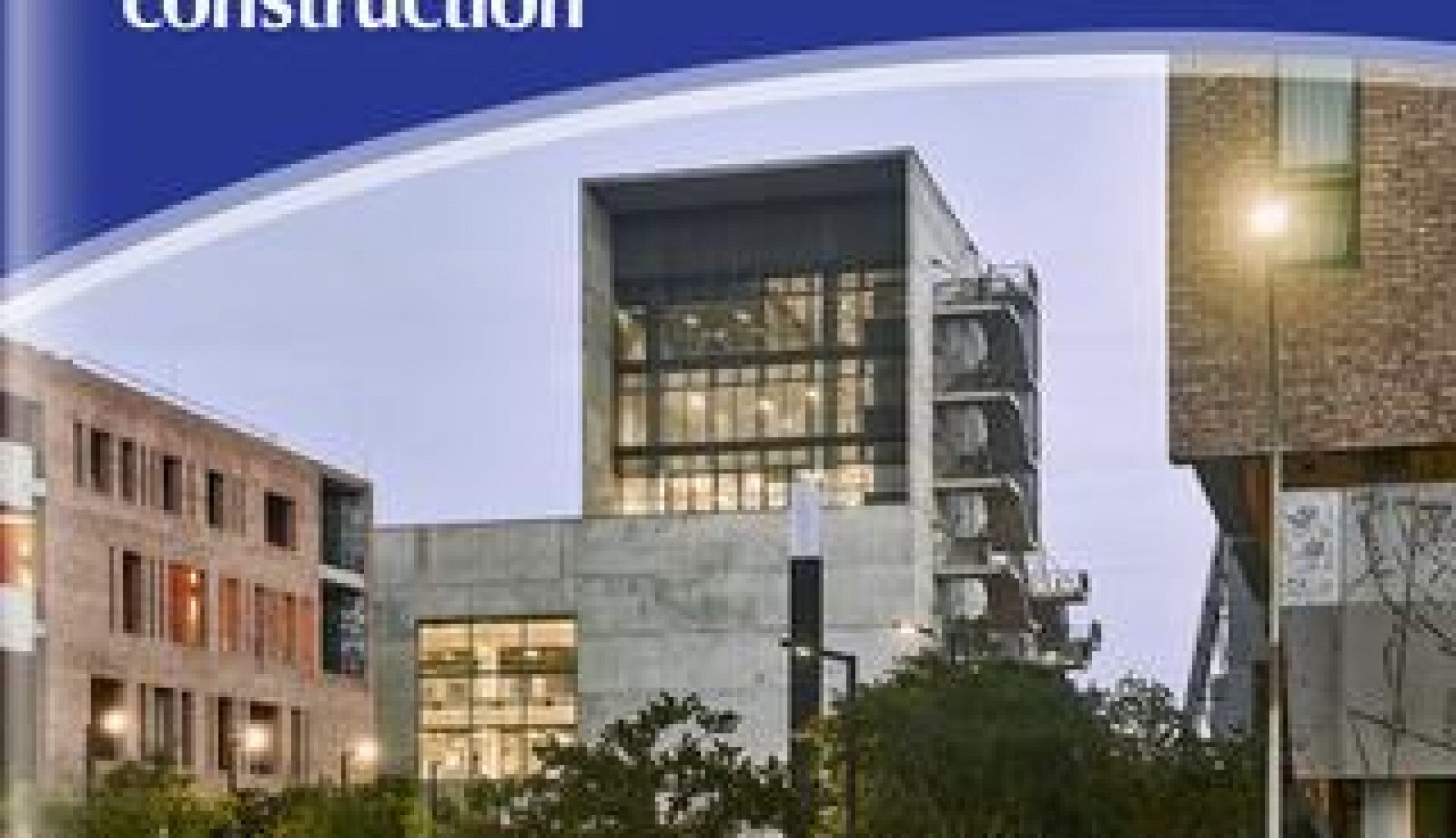 It is an extremely challenging period for the South African construction industry as is evidenced by the number of contractors that have already gone into business rescue.

“M&D has managed to buck the trend and we have been focused on growing our company in a shrinking market and tough economic conditions. In order to do this, we had to use one eye as a telescope, so we could look into the future and align our strategy to our environment, whilst using the other eye as a microscope, to ensure the daily operational issues were being managed well.”

For Rukesh Raghubir, CEO of M&D Construction, the need to differentiate and innovate has never been more important.

A construction sector that is recovering from recession and facing very low growth again this year, companies have been forced to revaluate the way they do things in a bid to become more efficient.

“Constantly identifying areas for improvement and adapting and thriving through change – these are both fundamental pillars of M&D Construction Group’s rapid growth and diversification,” Raghubir continues.

“We have survived these political shocks by having a resilient management team, sufficient cash reserves to weather tumultuous episodes, and always focusing on servicing clients to the best of our ability, guided by our core values.”

M&D is well-versed in dealing with market fluctuations. Established in 1982 with only a few fixed assets to its name, the firm has grown into a diversified operation with a strong presence in the building, civil construction and roads and earthworks industries.

This translates into an inventory of 100 items of capital equipment which are used on project sites, and a landmark turnover of R1 billion this past financial year.

Raghubir joined the company in 2006, from Group Five. “I was excited by the prospect of taking M&D from a small unknown company and turning it into a force to be reckoned with in the SA construction space,” he recalls.

This has been achieved through what the CEO describes as an unwavering commitment to “growing a great company with great people and great partnerships”, referred to internally as the four Gs.

It is a vision supported by core values, which include: ‘being safe’ on project sites; ‘doing it right’ first time and every time; ‘finding the best way’ by constantly innovating; and ‘doing what we say’ by always delivering on very high expectations. All of this, crucially, is underpinned by M&D’s ‘Khula Nathi’ motto, which translates from isiZulu to ‘grow with us’.

M&D’s recent milestone achievements owe themselves to a strong portfolio of both completed and ongoing projects covering a range of industries and applications.

A key project for this year is the upgrading of fire protection systems for Transnet Pipelines, both in Gauteng and at the client’s petroleum product storage facility in Kroonstad, Free State.

The Kroonstad upgrades, valued at R78 million and due for completion in July, are multidisciplinary by nature and encompass civil, structural, building and mechanical engineering, in addition to electrical instrumentation control.

“A major component of the work scope entails constructing a new pumping station that will be fed by a new bolted-steel water-storage tank with a capacity of 910,000 litres,” explains Raghubir. “Extensive foundation work was required before our team could commence building the main structure.

“We are also working in a hazardous and explosive environment that is in operation 24 hours a day, seven days a week throughout the year. Work has to be carefully coordinated with the daily Transnet Pipeline operations at the terminal.

“Considering the many ‘unknowns’ on this construction site, upfront planning can be an extremely complex undertaking, especially when we do large concrete pours and receive sizeable deliveries of construction materials and equipment.”

At the opposite end of the construction spectrum is a landmark social housing project in Vosloorus, Gauteng, known as the Katlehong-Tokoza-Vosloorus Complex.

M&D was appointed by the Ekurhuleni Metropolitan Municipality and Development Bank of Southern Africa to build eight 10 storey social-housing blocks on the 11-hectare site, which will result in 320 bachelor and 450 two-bedroom units.

Combined with an adjacent development being completed by another contractor, this development will accommodate more than 4,500 people.

“Importantly, this pilot project aims to deliver an integrated sustainable development that also caters to the social, economic and infrastructural needs of residents of this large township,” Raghubir adds.

“While a relatively straight forward design, quality control is essential right from the outset, considering the sheer extent of the building operations. One simply cannot afford to have many snag items per unit on this project, so absolute accuracy is required as the building starts climbing from foundation level.”

This is the first time that a social housing development in South Africa will exceed the conventional four-storey limit, facilitating the betterment of many more citizens – citizens who may also stand to benefit from theoretical and practical training offered, covering skills such as steel fixing and shuttering, as well as painting and tiling.

The project has also involved many M&D divisions. For instance, the Civil Engineering unit has been tasked with significantly upgrading existing services in the area like water reticulation and sewer systems.

Meanwhile, the Roads & Earthworks Division will improve the road network to accommodate additional traffic in and around the complex once the development has been completed. It is currently underway, the earthworks beginning in 2018.

“The structure’s concrete façade that appears as if floating 2.4 metres off the ground was the most demanding aspect of the entire project,” Raghubir recalls, “and the stellar outcome also led to the project being awarded a Fulton Award in 2017.

“The judges were impressed by the project’s role in pushing boundaries of architectural and engineering, in terms of concrete construction. Seamlessly blending in with the roof of the structure, the façade is a three-dimensional concrete envelope that is functionally, structurally and technically separated from the inner core of the building.”

M&D deliberately chose a construction that was not the most cost effective, opting to guarantee quality and surpass very demanding expectations.

The 220-millimetre-thick walls were climb-formed by M&D and supported eccentrically off slender steel columns, with significant consideration given to limiting the influence of concrete shrinkage.

“By involving us early during the design phases of the façade, we were able to share critical insights on shuttering, staging technology and construction sequencing,” Raghubir continues. “In addition to advising on an acceptable, consistent concrete colour variation, the building division helped optimise the programme and align costs to the client’s budget.”

Other impressive features of the structure, located in Kimberley, include reinforced concrete fire escapes on the western wall that are hung with tension rods and internal steel stair cases hung from the sloping roof slabs.

A fundamental factor in successfully competing projects such as this is a reliable network of suppliers and subcontractors, partners who share the same values relating to safety and quality and growing alongside M&D’s own success.

“M&D Construction Group’s philosophy regarding its supply chain partners is enshrined in its motto of ‘Khula Nathi’,” Raghubir elaborates.

“Another important consideration is that we have demonstrated our commitment to smaller participants in the industry. A sound example is the role that we continue to play as ‘big brother’ to many emerging contractors on our projects to ensure that they also thrive in the same manner as M&D, despite an increasingly tough operating environment.”

M&D’s ongoing focus on quality of course reverberates internally among its own employees as well as with suppliers.

The company is committed to ongoing investment in mentoring, skills development and training, covering the whole spectrum of the organisation from building site to corporate head office.

Raghubir mentions a partnership with Corporate Sufi, a provider of training and development programmes to clients which include billion-dollar enterprises.

“The programme has been very successful in enhancing focus and accountability, while developing engaging, empowered and invigorated leadership, who are able to assist in building a business with trust and connection,” he adds.

“Survival in this industry is dependent upon leaders who are focused on the positive and finding opportunity for future growth by breaking traditional mind-sets.”

M&D also looks after people in its surrounding communities in the form of CSR initiatives, a flagship example being its involvement in upgrading Chris Hani Baragwanath Academic Hospital’s Ward 32, the paediatric surgery of the state-run hospital in Soweto.

“I am very proud of the outcome,” says Raghubir. “Importantly, there is now ample space for parents and the nurses, while the children also have a comfortable environment in which to play to assist them in their quick recovery.”

Looking ahead, it is clear that M&D, through its ability to adapt, diversify and care for its communities, is well-set to thrive through what are still challenging times for South Africa’s construction industry.

In 10 years’ time the company’s vision is to be a R7 billion enterprise at the forefront of technology, benefitting all stakeholders.

By 2021 M&D envisions turning over R1.8 billion, being 100 percent black-owned and operating as a B-BBEE level 1 organisation with more diversity at board level. There is also a plan to expand into property developments and digitise the business through adoption of a cloud-based environment.

In the shorter term, Raghubir sets out his priorities for the year ahead, concluding: “Our President Cyril Ramaphosa has been very busy in addressing the concerns of the people of South Africa.

“This is a clear indication that we are laying the foundation for a brighter future by ensuring we set clear policies which will attract investment and grow our economy. This process will create many opportunities from which our company can benefit from, provided we remain relevant and are able to act swiftly, as we have done so successfully in the past.

“We need to appreciate that this will not happen overnight and will be a process that may sometimes seem slow. It may have a few bumps along the way, but in the end, we will be rewarded with success and our purpose of building a better country for everyone will be realised.”