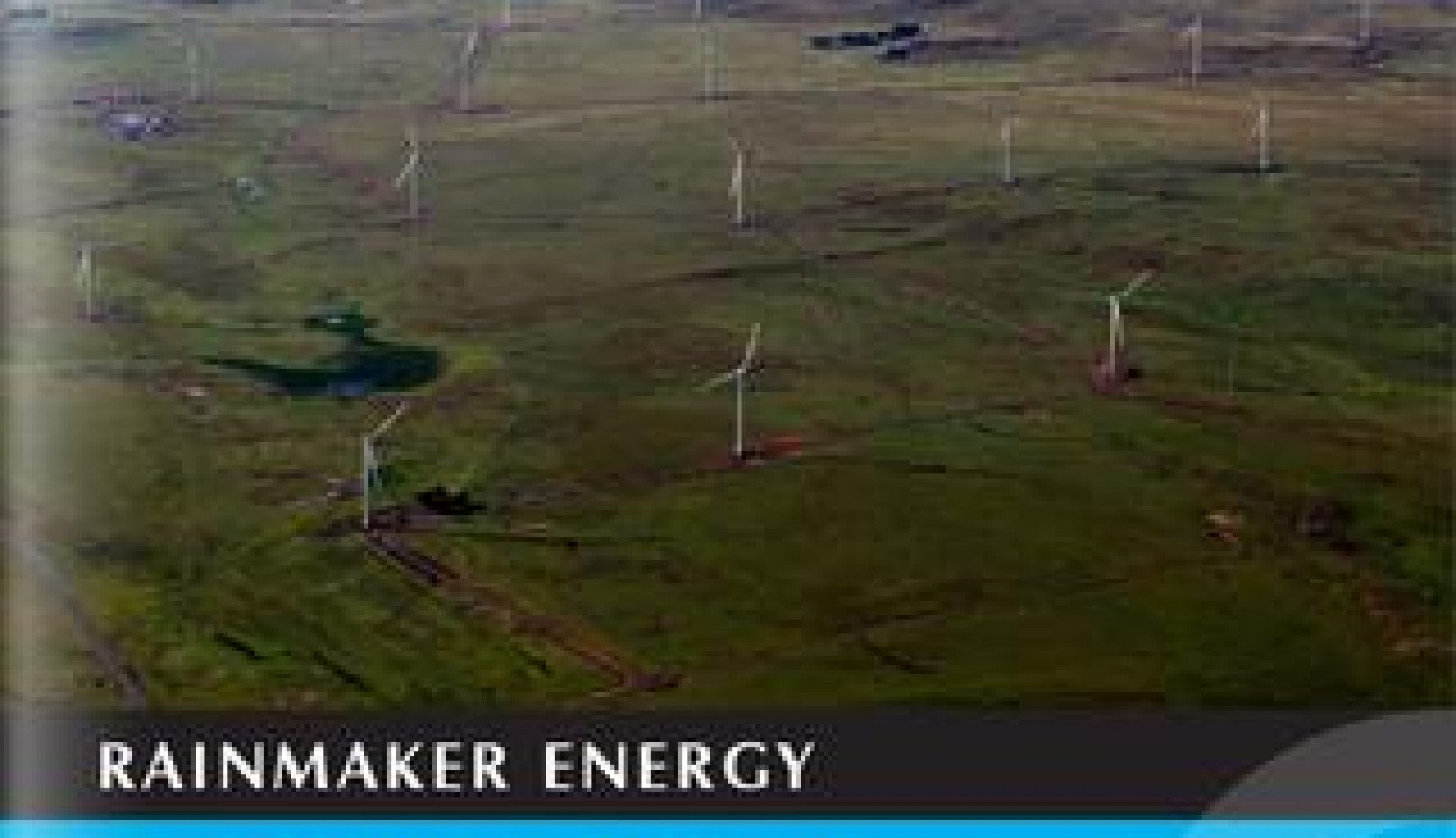 As a specialist in innovative renewable solutions, Rainmaker Energy is a privately owned company with broad expertise as an originator, developer and owner-operator of renewable energy assets in South Africa.

With firm foundations as a 100 percent South African-owned independent power producer (IPP), Rainmaker Energy has ambitious goals that it hopes to achieve in the next few years, eyeing opportunities in the global photovoltaic (PV) industry, along with the continued interest and expansions of the onshore Dorper Wind Farm in line with REIPPP Programme goals.

From its offices in Johannesburg, Cape Town and a newly established base in London, UK, Rainmaker has strategically positioned itself in two of the world’s renewable hotspots, leaving it well positioned to access and mobilise project development and investment opportunities across Africa, Europe and the Middle East.

The Company has developed an onshore wind project pipeline in excess of 450MW in South Africa since entering the market in 2009, prior to the official announcement of the REIPPP Programme in 2011; developing one of the first large scale grid connected wind projects – Dorper Wind Farm – with a further 330MW of wind and 290MW of solar PV projects also under development.

“Our first project, the 100MW Dorper Wind Farm has been fully-operational since 9 August 2014 and was awarded ‘African Wind Deal of the Year 2012’ by Project Finance Magazine, in recognition of its unique and innovative financing structure,” says Gavin James, one of Rainmaker’s Directors.

Given its full independence, Rainmaker benefits from flexibility on its debt and equity funding, having made no prior commitment to particular funding bodies. Combine this with a strong in-house technical, commercial and legal team who ensure each project is right for the Company portfolio, and Rainmaker Energy is ready to capitalise on the burgeoning market for renewables in key global markets.

Situated in the Eastern Cape province, between the towns of Molteno and Sterkstroom, Dorper Wind Farm is the perfect example of Rainmaker’s ability to see a renewable project through all challenging situations to its timely completion in a cost-competitive fashion. The Wind Farm consists of 40 Nordex 2.5MW N100 turbines, collectively generating approximately 281,196GW a year, with Nordex providing the key operations and maintenance of the site.

The Dorper Wind Farm represents the first phase of Rainmaker’s greater Stormberg Wind Energy facility that is currently under development. Rainmaker Director, Luke Callcott-Stevens explains: “When we initially commenced development in 2009, the REIPPP Programme had not been announced and there was no indication that there would be a cap on maximum installed capacity. The Dorper project was thus initially planned to be a 550MW facility and we secured the requisite land, and an Environmental Authorisation (EA) for 550MW was then approved by the Department of Environmental Affairs.”

Once it became apparent that the REIPPP Programme would have a 140MW cap on installed capacity for wind projects, Rainmaker elected to reduce Dorper to 100MW in order to ensure ease of connection into the onsite 132KV distribution line and we applied for the EA to be amended and split into four separate projects so as to be compliant with REIPPPP.

“Thus was born the Loperberg project (140MW), Malabar project (140MW) and Spreeukloof project (53MW), which will each connect into the onsite 400KV transmission line,” adds Doug Jenman, a Director for Rainmaker Energy.

Eastern Cape is a favourable area for wind farm development due to a number of factors, including the excellent availability of wind resource in the area and a continually improving road network infrastructure to transport heavy loads to the area. In terms of environmental impact, EIA studies have shown that risk is limited in the Eastern Cape, which meant Stormberg received full environmental authorisation from the Department of Environmental Affairs for Dorper and the next three projects now under development.

“Additionally, full heritage approval has been given for all projects, and both Civil Aviation Authority approval and Department of Water Affairs consent is in place for Loperberg and Malabar, with Spreeukloof in progress. The projects fall within Area 4 of the Phase 2 focus areas of the Renewable Energy Development Zones (REDZ), as identified by South Africa’s Council for Scientific and Industrial Research (CSIR) in its Strategic Environmental Assessment (SEA) exercise conducted to date. These areas have been selected as those with the highest development potential in the country and we are proud to be a part of this during a time of rapid renewable growth,” highlights Callcott-Stevens.

As the bidding process enters the extension phase of round 4, what is clear for South Africa is that renewable energy has been welcomed as a viable alternative to complement coal and nuclear power. Round 1 projects have now reached COD and are providing valuable and cost-effective electricity back to the grid.

“Wind and solar power, besides being cheaper, bring advantages at different times of the year. In summer there is more chance of coal shortages due to wet coal fields, but this comes at a time when solar is at its peak. Similarly, in winter, when the weather is at its coldest and demand for energy at its highest, many wind farms including Dorper are able operate at peak capacity, working in tandem with fossil fuels,” details Jenman.

According to a recent survey, renewable energy projects saved South Africa 120 hours of load shedding in 2014, translating to an economic saving of 1.6 million rand a year. Job creation in the sector has also been significant, with many projects now boasting a close-to 100 percent South African workforce and a growing number of local suppliers for operation and maintenance.

“This industry trend is happening much quicker than we first realised. OEMs are training local staff continually as a result of the number of turbines being installed at the moment.

“Advantageously, the specialist skills required are quite limited when compared to say, operating a nuclear power plant, meaning that the industry attracts more people who can be trained in a shorter space of time. For Rainmaker, this is very exciting as we are exposing so many new people to the processes involved in managing power plants in South Africa,” highlights Jenman.

“South Africa’s renewable industry is now saturated with skilled companies who encourage healthy competition and higher local content; when just five years ago, wind and solar power were seen as high risk areas of business. Now, a wind turbine foundation is poured almost every day in South Africa and wind farms decorate the landscape of the country’s windiest regions. We hope to play a leading role in realising the rest of the continent’s potential for renewable energy,” James, Callcott-Stevens and Jenman conclude.

In tandem with its Stormberg expansions, Rainmaker Energy is currently in the process of extending its reach beyond the borders of South Africa, identifying development and investment opportunities throughout the African continent and beyond. At present, it has identified the solar PV as a key technology for global growth, starting with Africa and the United Kingdom.

Having established a UK presence through SolarStone Energy Limited, Rainmaker is utilising its industry competencies, financial security and project operation knowledge to take advantage of other emerging renewable markets; hoping to play a key role in future energy development in new markets.