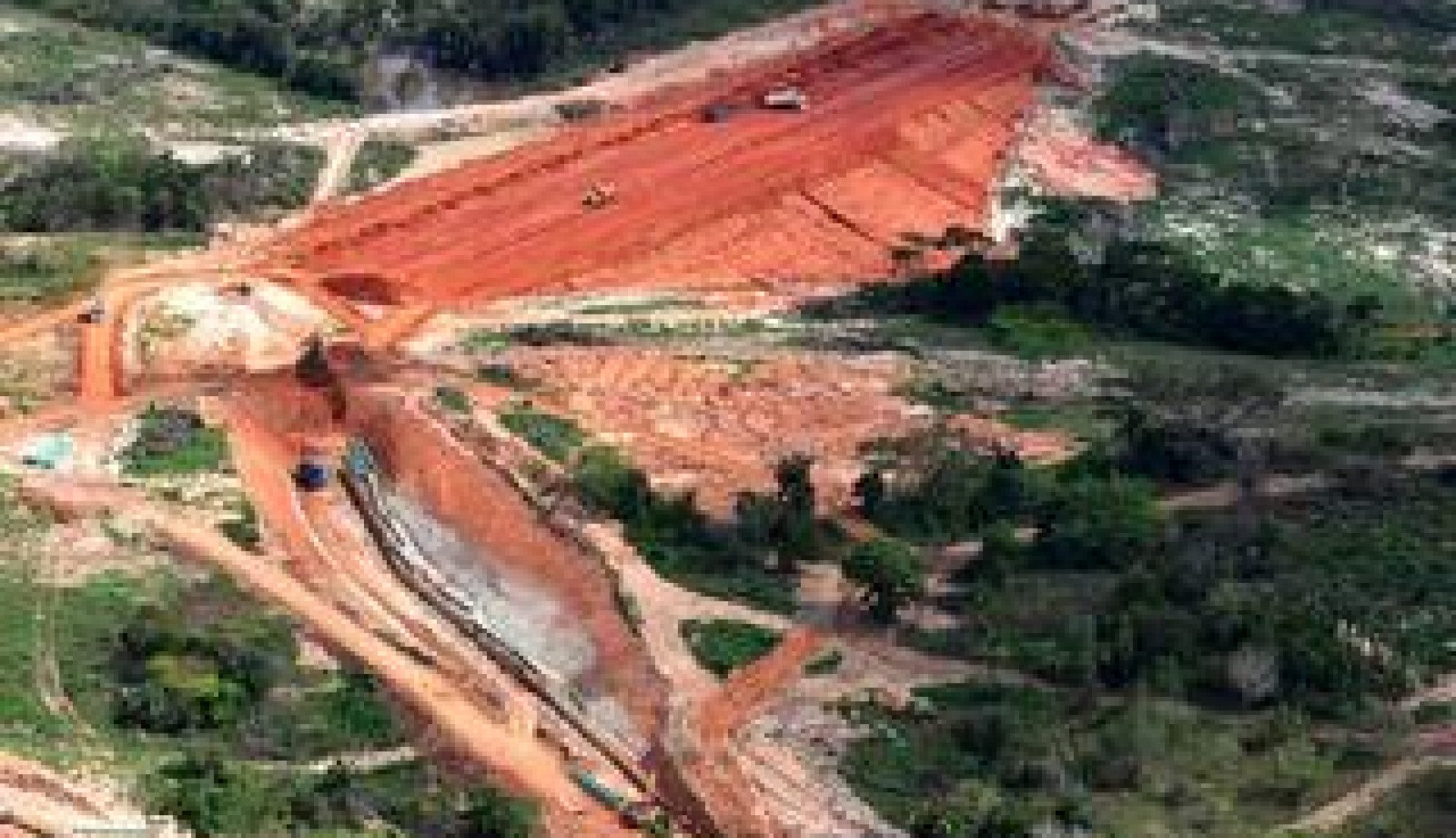 The sheer size and potential of Base Resources’ Kwale Mineral Sands Project in Kenya is impressive and it is tipped to be a “globally significant” producer, with a front-ended production profile over a 13-year mine life.

In January construction of Base Resources’ Kwale Mineral Sand Project passed the half way mark and it is now more than 70 percent complete, with production on track for the second half of this year.

The first bulk shipments of product are expected in December and key offtake arrangements are in place.

“It is safe to say that development is well advanced and on schedule,” says Joe Schwarz, general manager for external affairs and development, who explained that Kwale is poised to become a “globally significant” producer, with a front-ended production profile over a 13-year mine life. “It is estimated it will go on to contribute some $300 million to the government of Kenya in direct tax and royalty payments,” he says.

“Kwale was first initiated by Canadian explorer Tiomin Resources in the mid-90s,” says Schwarz. “They carried out the initial exploration, environmental, re-settlement and feasibility work but after several years of advancing the project they suffered a series of setbacks until, in July 2010, they sold the project assets to Base Resources.”

From there, says Schwarz – and with the backing of the Kenyan government – Base Resources registered a wholly owned Kenyan subsidiary, Base Titanium and immediately went about preparations to develop the project by updating the feasibility study and raising over $300 million in debt and equity to finance project development.

The Kwale Project is Base’s first and Kenya’s flagship mining development. “The project was officially launched in late 2011,” Schwarz explains. “How is it progressing? Well, from a construction perspective we started building the access road in November 2011 and the other infrastructure packages commenced from January through to April 2012. The project has been broken down into a number of discreet and independent infrastructure packages. These comprise the process plants, which account for half the project value, and a number of supporting infrastructure components – a marine terminal for mineral exports with a storage shed, wharf and ship loaders; a 14km 132kV transmission line and substation supplying power to the mine site; the eight million cubic metre Mukurumudzi Dam as the primary water resource for the project; a tailings storage facility, the 8km all weather mine access road; and “shared facilities” – the contractors’ camp, catering, temporary power, water, fuel and other support facilities. Beyond that we have “owner’s projects”, which comprises procurement of the mobile mining fleet and the dozer trap mining unit, construction of the borefield as a supplementary water supply, and preparing for the operational phase.”


The road is now complete as is the permanent power supply.

“We’ll be exporting three products – ilmenite, zircon and rutile,” says Schwarz. “Those three products are typically sold under a long-term offtake contracts. We have signed up contracts for over 70 percent of the production over the first five years to a number of clients around the world. A significant customer is DuPont in the US. There are a number of others in Japan, China, and elsewhere.”

“We shall be mining and processing high grade zones first, initially producing 330,000 tonnes of ilmenite, 80,000 tonnes of rutile and 30,000 tonnes of zircon annually. That reduces in later years when we get into the lower grade zones.” To date, the project has helped create significant employment and other economic opportunities for local communities. And more is expected. Kwale and Base Titanium are very much viewed as a “flagship” that will attract further investment into an industry sector that, despite remaining neglected and dormant for a considerable period of time, is now experiencing a ground swell of interest.

The government has supported the project throughout. Because of the scale of the project it agreed to enter into an investment agreement that provides a number of concessionary terms.

“This is a significant project for Kenya in an industry that is still in its infancy,” says Schwarz. “The investment agreement was negotiated with government several years ago under the previous owners and the purpose of an investment agreement is to provide stability for the project. You need those to be able to get a project of this size off the ground successfully, especially where it hasn’t been done before.”

According to government estimates, minerals and mining contribute just 0.7 percent of Kenya’s GDP and in terms of total export revenues it is less than two percent.

The growth potential is massive.

“Kwale is a bit of a kick-start for the sector,” says Schwarz. “Mining was something that was seldom talked about in the context of Kenya, certainly not before this, but it does underline its importance for the future. Now there is a lot of talk about mining and it is really on account of this project and the publicity and hype created around it. Not only that, but oil has now come into the picture too. We are really on the threshold of the extractives industry taking off. If you look at the way the new government has been structured you can see the emphasis has now been placed on the development of extractives. We had 42 ministries previously and minerals were lumped in with environment. Now we have 18 ministries, but mining has been given its own ministry as has energy and oil. So it is clear the new government recognises the importance of mining and other extractives as the engine for rapid growth and an increasingly significant contributor to the economy. You’ll find it pretty hard to expand mature sectors of the economy. It is a slow gradual process. But mining and oil have the potential to grow very, very quickly from a near zero base.

“And yes, we are a barometer, a flagship and a potential catalyst for serious investment in Kenya’s mining and oil and gas industry. Right now minerals contribute slightly over half a percent of GDP and less than 100 million US dollars a year in export revenues. So you can see there is huge potential to increase those numbers. This project alone, just Kwale, will triple mineral sector exports to promote it to fourth place on the export league table behind the traditional big three – tea, horticulture and floriculture, and tourism.”

According to Schwarz, the project will not be subject to local equity laws.

“They will not be applied to Base’s Kwale Special Mining Lease because it cannot be applied retroactively to rights granted under the legislation of the day,” he says. “The local equity law is something that came out in October last year. We also believe it is contrary to Kenyan policy in general when it comes to investment and property rights. While it is law, we believe that the new government will review it as part of the overhaul of the current mining act with dates back to 1940 – from that you can deduce that it is fairly archaic. What we need is a holistic policy debate to inform the upcoming new legislation. Arbitrarily issuing surprise regulations undermines investor confidence. But I believe the new government will look at it pragmatically to balance the interests of foreign and local investors and communities.”

Kwale is the tip of the iceberg far as Base’s East African ambitions go. Base Titanium is also eyeing potential projects further north on Kenya’s coast. The firm said it has begun exploration in three sites and several additional targets present a range of potential development opportunities.

“We do have exploration licenses for other mineral sands properties,” says Schwarz. “Clearly, though, our focus right now is on developing Kwale. We need to get it up and running first. Once it is in operation we will start looking to identify the next project. We intend to build a significant mining industry; not just in Kenya but in East Africa, not necessarily restricted to a particular country or countries. We are looking at building a long-term presence; not just to deplete Kwale and leave.

That’s not what we are about. We are here for the long haul and are looking at being the premier mining company in Kenya and beyond.”

The Kwale mine is estimated to have 140 million tonnes of reserves.

VIEW THE Base Titanium BROCHURE