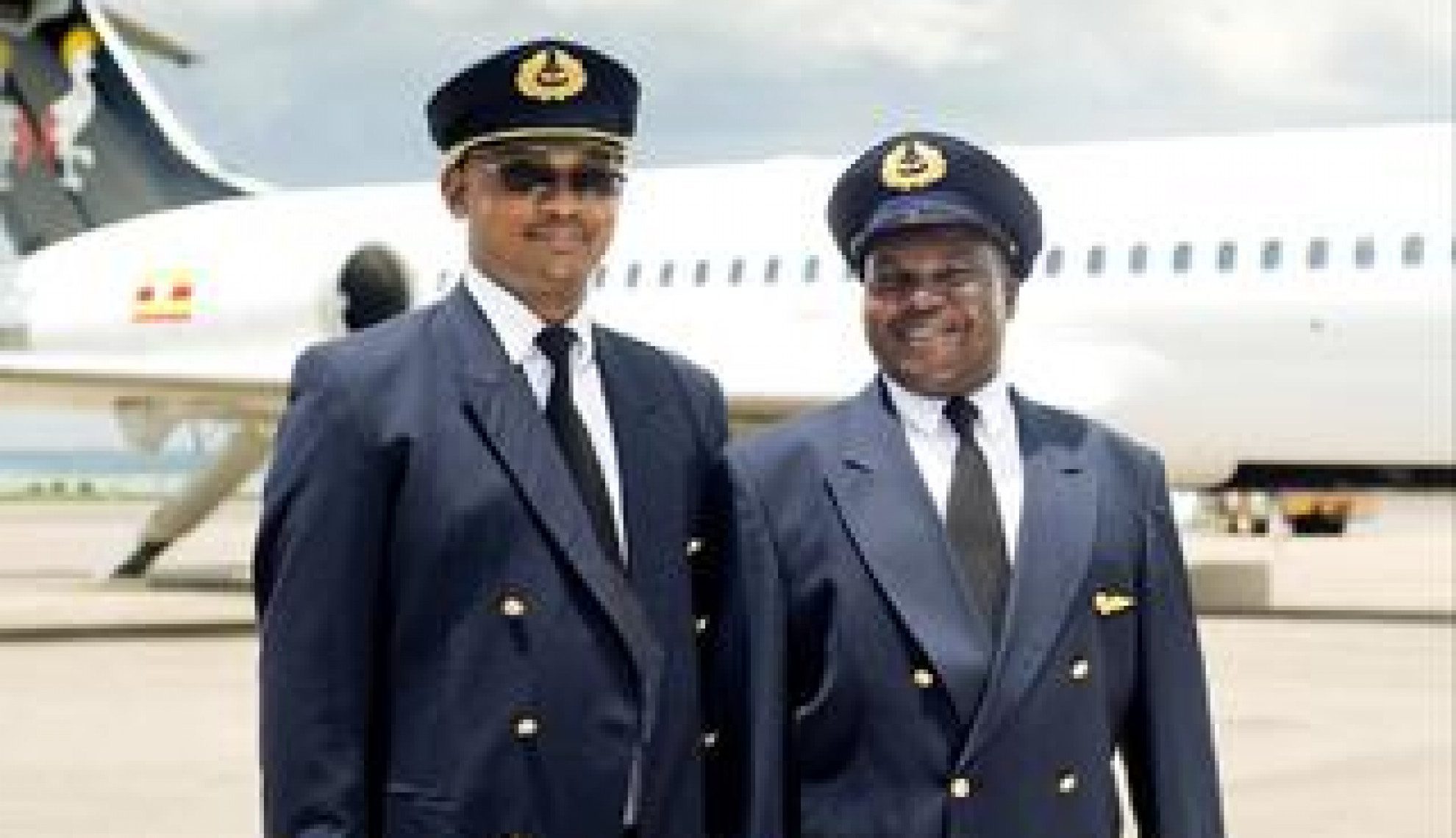 The wings of East Africa

Air Uganda was established in 2007 as a quality regional airline after more than 20 years without a national carrier in Uganda. In the six years since, the airline has grown from serving approximately 80,000 passengers a year to 170,000 passengers per year and runs on the basis of three pillars of high service and operating standards, reliability and punctuality.

“How has the past year been for business for Air Uganda?” asks Cornwell Muleya, CEO of Air Uganda. “We have been growing steadily over the past year and have consolidated our routes across East Africa. The Ugandan air transportation market has been growing at approximately 15 percent every year now for six years in a row. Incidentally, we turned six years old today.”

Air Uganda, otherwise known as “the wings of East Africa”, runs a two class product on board: Crane Class, which is its premium products, and an economy class. The airline also runs a frequent flyer programme called the Celestair Club.

“We maintain a small, homogenous fleet,” continues Mr Muleya. “This allows us to standardise our product on board and minimise operating costs. We were founded in 2007 in response to the need of Uganda to have an airline operating out of Entebbe airport. From here we connect passengers to all major cities in East Africa and in particular to Nairobi, Bujumbura, Mombasa, Juba, Dar es Salaam, Kigali, Kilimanjaro and Mogadishu.”

Air Uganda makes the most of its small fleet of three aircraft by running an extremely efficient and punctual service. It gained IATA Operational Safety Audit (IOSA) certification quickly two years ago, allowing it to become equal in terms of safety and operating standards like the large international players in the industry. And its IOSA certification has just been renewed for another two years as per IATA practices and procedures.

Through these partnerships the airline connects its passengers on long-haul services to other regions of the world.

“Last year Air Uganda took control of its Entebbe Hub operations by starting its self-handling services,” says Muleya. “We wanted to take control of our own product in terms of standards and service levels. We were especially keen to ensure a quick turnaround of our aircraft and to minimise delays out of our home base. We can turn an aircraft around within 30 minutes and taking control of Entebbe Hub has improved our output in terms of punctuality across our network. This has helped enhance our reputation for having the best punctuality service of all the airlines in our markets. We are a full-service carrier and we have continued to improve our ground and on-board services each year.

“Aviation is a people’s business,” Muleya adds. “We therefore invest in the training of our people to keep a high standard and personalised warm reception for our passengers. The cleanliness of our premises, as well as the aircraft on board is also important in ensuring our customers get the best from a quality airline. So, is our reputation for being on time.”

In a fast-growing industry, finding staff with the right skills can be tricky. How is Air Uganda ensuring it has the best people for the job? “Like all airlines in this competitive industry, staffing has been a huge issue as skilled personnel are in short supply,” he says. “There is a shortage in Africa of qualified technicians, engineers, pilots and other operational staff. For such skilled staff we look to the international labour market for pilots, engineers and some key financial services. In critical areas like aircraft maintenance we may use short term interventions from specific organisations abroad. ”

However, Air Uganda has also responded to the skills shortage challenge with significant investment in the training of its people. It hires highly educated Ugandans and trains them to international expertise.

“We have a development programme within the company for local staff because that is more sustainable for the airline in the long run. We use joint programmes with international organisations like IATA and AFRAA to provide cost effective training at regional centres in Africa, except for specialised trainings like simulators, which, for the aircraft we operate, are found overseas. We send people abroad for a lot of that in keeping with international standards. We are regulated in such areas by our CAA and international aviation organisations such as ICAO to which all state parties have subscribed for the aviation industry,” Muleya says.

As a result of such measures, Air Uganda boasts a workforce which is more than 90 percent local and 10 percent international.

“One of the biggest challenges for any airline must be the security; how do you address this risk in the industry? We cooperate and work closely with many service and security organisations at each of the airports we operate from. Typically, the airline has its limited security personnel and they work hand in hand with airport security personnel, who in turn work with the country’s security organisations and structures. There is a great deal of sharing information on risks and incidents so that the safety and security of the travelling public is not compromised. This will remain a challenge of the industry for many years to come. Our commitment is to use best practice in all areas and to comply with the safety standards in all the countries in which we operate. There is a huge sharing of knowledge as we try to close any perceived gaps in this critical area of our industry,” Muleya says.

In addition to international standards and industry best-practice, each country Air Uganda operates in has its own stringent checks. For example, while most airports will have two or three checks before passengers can get on the plane, specific countries where the risk is higher may have even seven check points.

The other challenge hitting the entire industry is cost. At the top is the cost of fuel, which is usually out of the control of the airlines and in recent years has accounted for approximately 40 percent of airline operating costs.

“When the fuel prices increase that is a big problem for the airlines. Also, with increasing airline taxes at most airports, there is a balancing act to be struck in the pricing of the tickets as the passenger will not distinguish between the fare, which goes to the airline, and the taxes, which accrue to the airport authorities and the governments,” concedes Muleya.

The other challenge for a growing regional carrier in Africa is that not all the airport destinations Air Uganda operates reach the international standards passengers expect. “There are differences in the quality of airport facilities, especially for transit passengers who expect to connect seamlessly to other destinations,” says Muleya. “The customer service offered by airport personnel in processing passengers and their baggage also differs, with some airports faring better than others. We need to reach minimum operating standards to ensure passengers feel comfortable to come and fly and transit through our airports. We are pleased to note that most, if not all the airport authorities in the region, have recognised this problem and have announced programmes to upgrade many of these airports.”

So far the airline is doing an excellent job at continually improving the service offered.

It has developed an excellent website which allows customers to book and pay online, using all forms of payment including mobile money, in response to the needs of the consumer.

“We are taking advantage of technology with our website initiatives. In our region mobile money is big and customers expect this platform from any progressive company. Therefore allowing customers to pay using mobile money is a natural progression of the changes reflected by our society in East Africa,” says Muleya. “We also have an active social network programme so that customers can interact with us and make bookings on both Twitter and Facebook. We are growing our followers on those platforms and this has kept us on our toes.”

So what does Air Uganda have planned for the future?

“We have dealt with most of the initial challenges of starting up the airline in the past five years. We are now in the process of consolidating our position in the market by offering more frequency to our key destinations in East Africa,” says Muleya. “We aim to grow at a rate that allows us to balance costs and services effectively.”

Alongside this Air Uganda is planning to open a number of new routes, not just following other operators into already crowded market places, but by pioneering new routes to niche markets in the region.