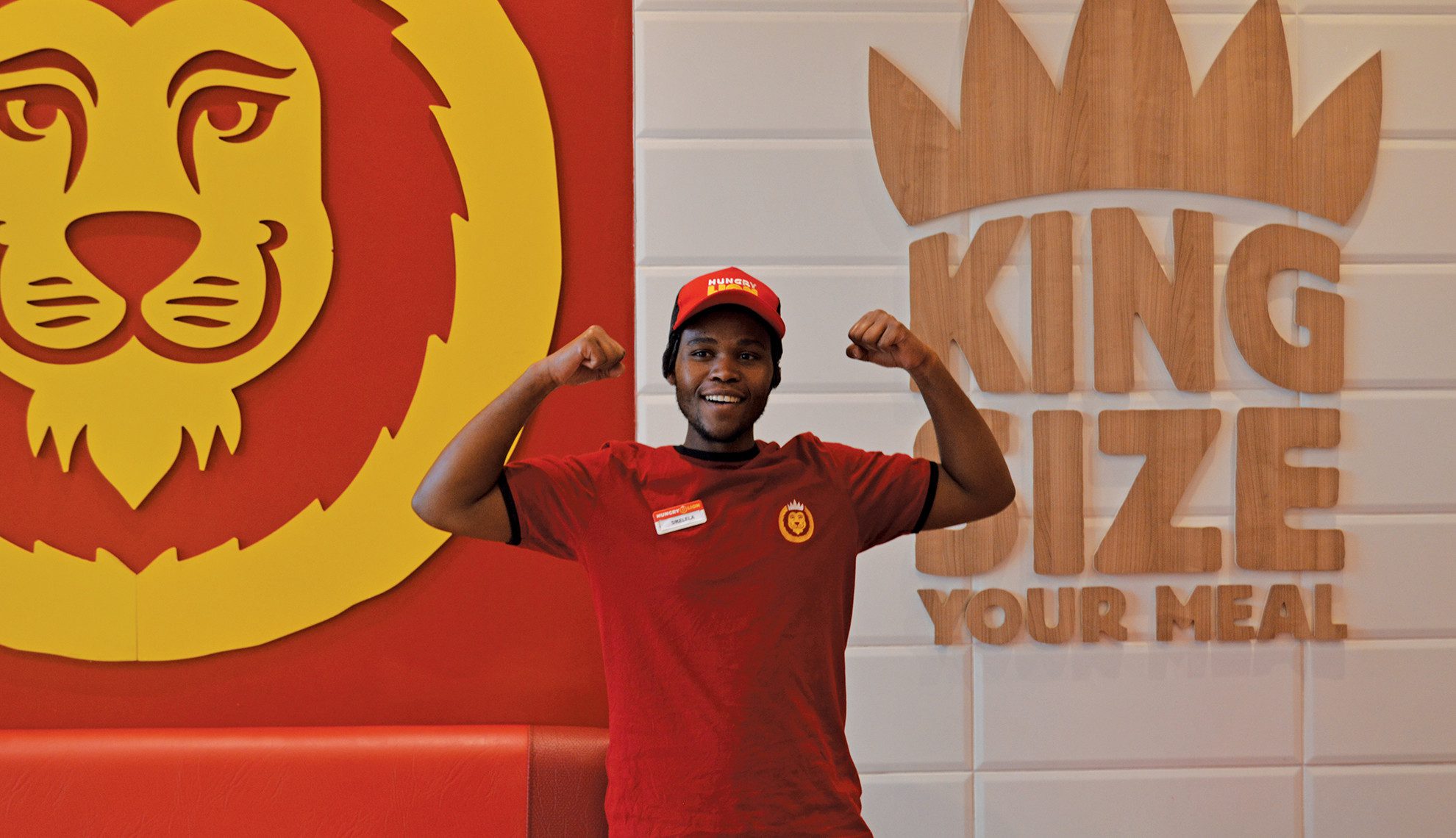 Adrian Basson is a self-described Afro-optimistic. “There’s no hiding from the fact that there are a lot of challenges in Africa, but retail is a promising sector when it comes to facilitating opportunities, creating employment and generally building a business that can have a widespread impact,” he says.

“When you reach a remote town with an empty plot, the local people don’t often have much. But as we’ve built new stores and helped to launch new shopping centres, we’ve been able to not only witness, but also facilitate the construction of new, thriving ecosystems. We’re proud to be a business that contributes to the success of these societies – I guess you could say we’re a capitalist business with a socialist outlook.”

Basson, now CEO, became part of the Hungry Lion story in 2001 and has seen the company come a long way over the past two decades to be the responsible, esteemed organisation it is today.

Having opened its first restaurant in South Africa in 1997, the business today proudly operates a network constituting over 200 stores across South Africa, Lesotho, Swaziland, Botswana, Namibia, Zambia and Angola, with over 4,000 Hungry Lion employees. Looking at the bigger picture, however, such statistics only touch the surface of what the brand is bringing to the region.

“In many ways I like to think that our product is an afterthought in what we’re looking to achieve,” explains Basson. “Yes, serving bigger portions, more chips and more smiles is key to our operations, but it’s just one part of our overriding goal – providing joy to our employees, customers and local communities through food, served with passion.”

This ethos is relatively new to the firm, becoming more of a core focus during the company’s major rebranding process that kickstarted in 2014. Having originally been part of the Shoprite Group, Africa’s largest food supermarket chain, Hungry Lion is now a totally independent company in its own right with a unique brand and character.

“In the beginning, we weren’t really building a brand,” reveals Basson. “We purely sold chicken and chips at an affordable price on a somewhat ad-hoc basis. However, we eventually found ourselves with 100-plus stores, and with the economic challenges that came around in 2008/09, we realised that stores without a brand, a story, and an experience would fail to deliver in the long term. It was a case of changing with the times and we invested a lot into the design of our stores, our product quality and consistency, together with the development of the brand itself.”

Since transitioning from being a business-centric to a customer-centric brand, Hungry Lion has reaped the rewards with the business undergoing stratospheric growth over the past few years.

Adding a modern twist
Moving in this re-energised direction, strategy changes quickly followed for Hungry Lion, evidence of which can be found in the firm’s increasing use and the implementation of revolutionary technologies.

Fast forward to today, the company now benefits from artificial intelligence, automated system checks, cloud computing and live dashboards – technologies which serve multiple purposes in the way of driving the business forward. This together with an always connected workforce, makes executing operationally so much more efficient.

“I’ve always had a connection with technology,” Basson reveals. “I used to work in the technology division of Compaq in London and also formerly as the Chief Digital Officer of Shoprite for a period. We live in an era where we can augment the people with technology to do the repetitive stuff, so that they can focus on the more human touches.”

In a space where most others in the fast food industry are franchised and owner-managed, Hungry Lion is unique in the African landscape, with almost all stores being fully-owned and managed from its Head Office. This is where automated systems and clever use of technology comes to the forefront in managing the business over vast distances and across borders.

“With technology comes data and with data comes insight,” Basson continues. “Using our systems, we’re able to see the performance of each of our stores in real time, have an overview of customer experience, and execute plans to fix problems at speed and scale. These capabilities would never have been possible if we didn’t have the right technologies in place.” With full visibility of information comes accountability, since everyone can see what needs to be done and if it was done.  Transparency is a crucial merit of these technologies, a cultural trait of Hungry Lion that is accentuated in other ways.

Basson adds: “We have a network of area, country and regional managers who act as an extension of our Head office in Stellenbosch. Head office employees pay regular visits to different regions to keep a finger on the pulse of local operations. Our area and country managers, in turn, come to Head Office regularly for updates to business processes, training, and meetings. This constant exposure in both directions ensures that best practises are shared and implemented to all stores quickly.”

Prosperous career planning
Combined with both these expansive technologies and a transparent, remodelled structure, Hungry Lion recognises that its staff are key to achieving the firm’s ongoing ambitions.

To this end, the company ensures that it provides extensive benefits to its employees, bolstering its position as an employer of choice and equally its talent retention capabilities.

Such initiatives include the introduction of E-learning materials in five languages and the company’s live in-house training platform from LessonDesk, a comprehensive new employee assistance programme, access to affordable healthcare for employees and more specialised and tailored training programmes.

What’s more, Hungry Lion has a strong focus on career planning, testament to its culture of internal promotion.

“Typically speaking, joining a fast food business as the lowest level of employee, the pay isn’t fantastic and it’s not uncommon for these workers to have bigger aspirations,” explains Basson. “What we’ve realised is you can either listen to and facilitate these ambitions, or your workers will leave and look for opportunities elsewhere. We like to pursue the former, providing clear career paths for our inspirational and aspirational workers. From cashiers to controllers to junior managers to regional managers, and so on, this personal growth structure is in place at Hungry Lion.”

A core part of the company’s ethos, providing key opportunities to reward loyalty and ambition, Hungry Lion offers not just a job but an all-encompassing opportunity to build a prosperous career.

A sound, responsible outlook
Such a humble and grounded approach is not only applied internally, but equally externally through a number of corporate social responsibility initiatives.

These are built around Hungry Lion’s three-pillar CSR strategy, with the organisation contributing towards hunger alleviation, championing change in local communities and promoting skills development.

Between February and March of this year alone, for example, the company provided food for the attendees of a seminar addressing the issue of domestic violence, pupils of an underprivileged primary school during a field trip and fire fighters in the Western Cape, while also supporting a Soweto children’s home and a local police station’s cricket tournament for rural schools.

“It’s an element to our business that we take pride in,” reveals Basson. “We like to show that we care for our communities, customers and especially our employees and their families. There’s a lot of need in Africa from a poverty standpoint and being in the food business we’re able to help local communities in addressing such issues. I wouldn’t say we have a set agenda – ad hoc opportunities arise, and we react accordingly in each of the locations that we’re based, helping to give people a sense of purpose and promote skills of local communities.”

Asked about a particular such initiative that springs to mind, Basson is quick to highlight the company’s efforts in supporting the Zambian people during a cholera outbreak at the beginning of 2017.

He continues: “We immediately lowered the prices of our food, ensuring people could get nutritious, safe and affordable food, we donated money to the government that was used to help with the clean-up process. We even provided sanitation kits to our staff, helping them clean their own living environments to ensure their family’s health.”

Having developed a culture that is firmly centred around providing benefit to all people, whether it’s supporting local communities or providing unrivalled, progressive career opportunities, Hungry Lion’s outlook is unique and admirable.

Opportunity is a word that is creating an atmosphere of excitement within the company at the moment, with continued expansion firmly on the table for Hungry Lion after experiencing double digit percent organic growth over the past two years.

“We’ve set 20 new stores as a benchmark, but realistically this is a ball-park figure on the conservative side,” reveals Basson. “If we can open 50 stores then we’ll do it – if we find a good site where we can profitably trade, we will open. There aren’t any specific limitations.”

New systems and optimised procedures in place, last year’s corporate action, focus on organic growth, and consolidation allowed Hungry Lion to not only transition into independence, but equally provided the platform for the company to gear up for full throttle expansion over the coming years.

“We’re realistic at the same time,” Basson continues. “We understand that we cannot conquer the whole continent in 2019 or 2020, but the plan is to grow as fast as possible. Africa has around 1.2 billon people but in the next three decades this number will double. Further, there are 54 countries across Africa, countries that we know we’ll have a good chance of being able to expand into, whether it be through franchises, joint ventures, or other kinds of partnerships. The opportunities are immense, and I feel our business is a prime example as to why it’s a great time to be investing on the continent right now. I just hope that others will come and join us in the fun!”