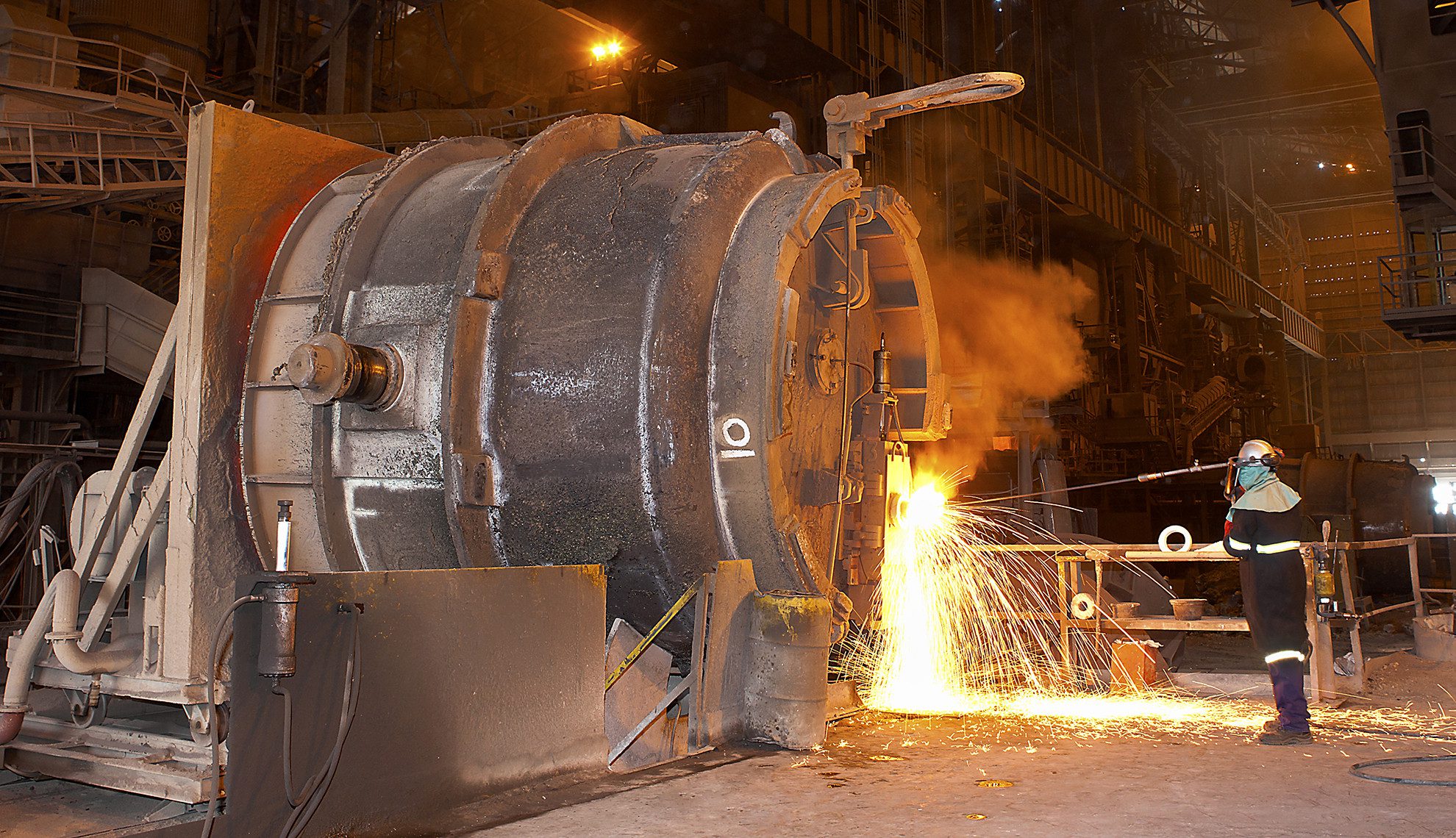 With shareholdings in the Company changing hands numerous times over the course of its 88-year history, the Company has taken up additional business in order to answer the current and future market demand for steel products by increasing its production and output of steel plate; despite facing tough competition from foreign imports and an overall weakening economic climate.

As Africa’s largest steel producer, ArcelorMittal South Africa has installed capacity to produce six million tonnes of steel per annum – as of June, 2016 – across its operations in Gauteng, KwaZulu-Natal and the Western Cape. The Vanderbijlpark Works in the former region is one of the world’s largest inland steel mills and the biggest supplier of flat steel products in sub-Saharan Africa.

Showcasing its depth of technical and managerial expertise across not only its primary business vertical, the Company also has interests in coking coal and is able to process and beneficiate metallurgical and steel products into coal tar pitch.

With domestic sales accounting for 90 percent of its revenue, the Company proudly contributed R43 billion to South Africa’s economy in 2015, an amount equivalent to 1.1 percent of the country’s GDP. This is further compounded by a team of 9,315 permanent employees, in addition to supporting more than 90,000 jobs directly and indirectly across South Africa, as well as investing a total of R12.6 million back into local communities in 2015, impacting 18,300 people through a multitude of socio-economic development initiatives.

With the recent economic climate presenting difficult trading conditions, ArcelorMittal South Africa has adapted and restructured several internal departments to optimise its operations. Over the past few years, the Company formed a Business Improvement division to continuously identify and implement measures to improve operational and financial performance in a bid to regain local market share; a feat which has become increasingly challenging as a result of Chinese imports and over-supply in the market.

Dean Subramanian, ArcelorMittal South Africa’s Acting Chief Executive Officer (CEO) in 2016 explained at the time: “Until last year [2015], South Africa was one of only two steel-producing countries (out of a total of 69) that did not have protection measures in place to counter the impact of foreign imports. Based on the recent approval of import duties by the International Trade and Administration Commission (ITAC), I am confident that stability will be restored in the coming years.”

He continued to say: “Our innovative and creative investments in research and development (R&D), as well as the significant spending allocated to environmental and health & safety initiatives, will also serve to counter over-supply and distinguish us from the competition; boosting efficiencies and optimising costs. We continually monitor the quality of our products and are quick to respond and address any problems by applying the necessary knowledge and technology to find a solution.”

Benchmarking itself against similar manufacturing plants through the Global Technical Benchmark System used by the Group, ArcelorMittal South Africa also embraces the latest technologies that can enhance and streamline business activity.

“We are continuously working to increase the level of automation in all our plants and now utilise SAP as standard across our ERP systems. Moreover, on a Manufacturing Execution System (MES) level, we have adopted various bespoke developed systems,” Subramanian detailed during the interview.

In spite of the industry slowdown, the Company has experienced growth in the automotive and renewable sectors in particular, due to increased localisation of products and the need to develop higher grades of steel.

“There has been huge but somewhat erratic growth in the renewable energy sector in recent years and we have been working hard to extend our product range in relation to steel plate products for wind turbines, which are largely being imported from China,” he added.

“Similarly, the rising cost of electricity in South Africa means that we are making internal investments in energy efficiency initiatives and exploring viable alternative sources of power generation.”

Working closely with the South African Government to identify and implement various measures to ensure the sustainability of the local steel industry – including the introduction of import tariffs on 10 locally-produced steel products as well as the consideration of anti-dumping measures – ArcelorMittal South Africa continues to work with the best interests of the wider economy in mind.

“First and foremost, we are a proudly South African steel-producing Company and this is heavily reflected in our emphasis on local employment, B-BBEE emphasis, and community and Government involvement,” said Subramanian, who has since been replaced by the current Chief Executive Officer, Wim De Klerk. “Our employment strategy is designed to provide local opportunity through apprenticeships, learnerships, bursaries and other skills development initiatives to ensure there is a pool of qualified talent available to meet both current and future requirements.

“In partnership with the Department of Science and Technology and the Department of Education, our Science Centres represent our biggest investment in the local communities in which we operate; providing local students with extra tuition in science, technology, English and mathematics (STEM subjects). In 2016, our flagship Science Centre in Sebokeng is celebrating 10 years of existence, and we plan to celebrate this milestone with the former learners who have been part of the initiative.”

Policies and procedures at ArcelorMittal South Africa ensure that all employees are afforded with equal opportunities and individual progression. The Company’s Transformation department has also undertaken a robust and ambitious programme to develop local entrepreneurs via a six-month pilot programme in partnership with the Vaal University of Technology aimed at enhancing the skills of local business people. The division also launched an industrial and manufacturing hub later in 2016 which provided at least 12 local fabricators with a facility to work from, access to markets and the opportunity to exchange ideas.

“We are cognisant of the role that we play in the socio-economic development of local communities and as the country’s and the region’s largest steel producer, we will work with all stakeholders to ensure the sustainability of the South African steel industry for the benefit of all stakeholders,” Subramanian further detailed in regards to the launch last year.

The global steel industry contributes enormously to the growth and development of economies around the world. With the crisis in the steel industry continuing unabated, it is more important than ever before to ensure that ArcelorMittal’s Group-wide stakeholders understand the threat to the industry and the implication for national and local economies.

“We are focused on stabilising the business and returning our operations to profitability. Above all, we aspire to be the preferred steel producer on the African continent as we understand what steel products are needed to satisfy the demand,” noted Subramanian in a sentiment no doubt echoed by De Klerk since taking up the post.

On a local scale in South Africa, the Company is more than half-way through its 2012-2019 strategy, which will grow ArcelorMittal’s footprint on the continent even more extensively.

Subramanian rounded up the remaining goals for 2016 and 2017, onwards: “We hope to double our tin product capabilities for the packaging market, continue modifying our facilities to produce galvanised products for the automotive industry, bolster our construction market offering, and conduct a mini-reline of our blast furnace at Saldanha to extend the life of our operations.

“The global steel crisis has undoubtedly affected our business and we have had to respond swiftly and decisively to ensure that we survive into the future. We are confident that with the important steps we have taken – together with the positive interventions agreed by Government – that we will be able to turn the business around in the medium-term. We will continue our engagements with the Government to ensure that the necessary protection measures are fully implemented, including the designation of locally produced steel for use in Government infrastructure projects.”

And with the inception of a new Arcelor Centre in Isando; R12.6 million spent on three science centres; a five-year pricing plan in place with the Government to aid the consistent price of steel; the imminent introduction of two internal programmes; and the ongoing raising of funds in order to refurbish and update all of its facilities – the aforementioned important steps are continuing to be taken to compound ArcelorMittal’s stronghold on the industry in South Africa.