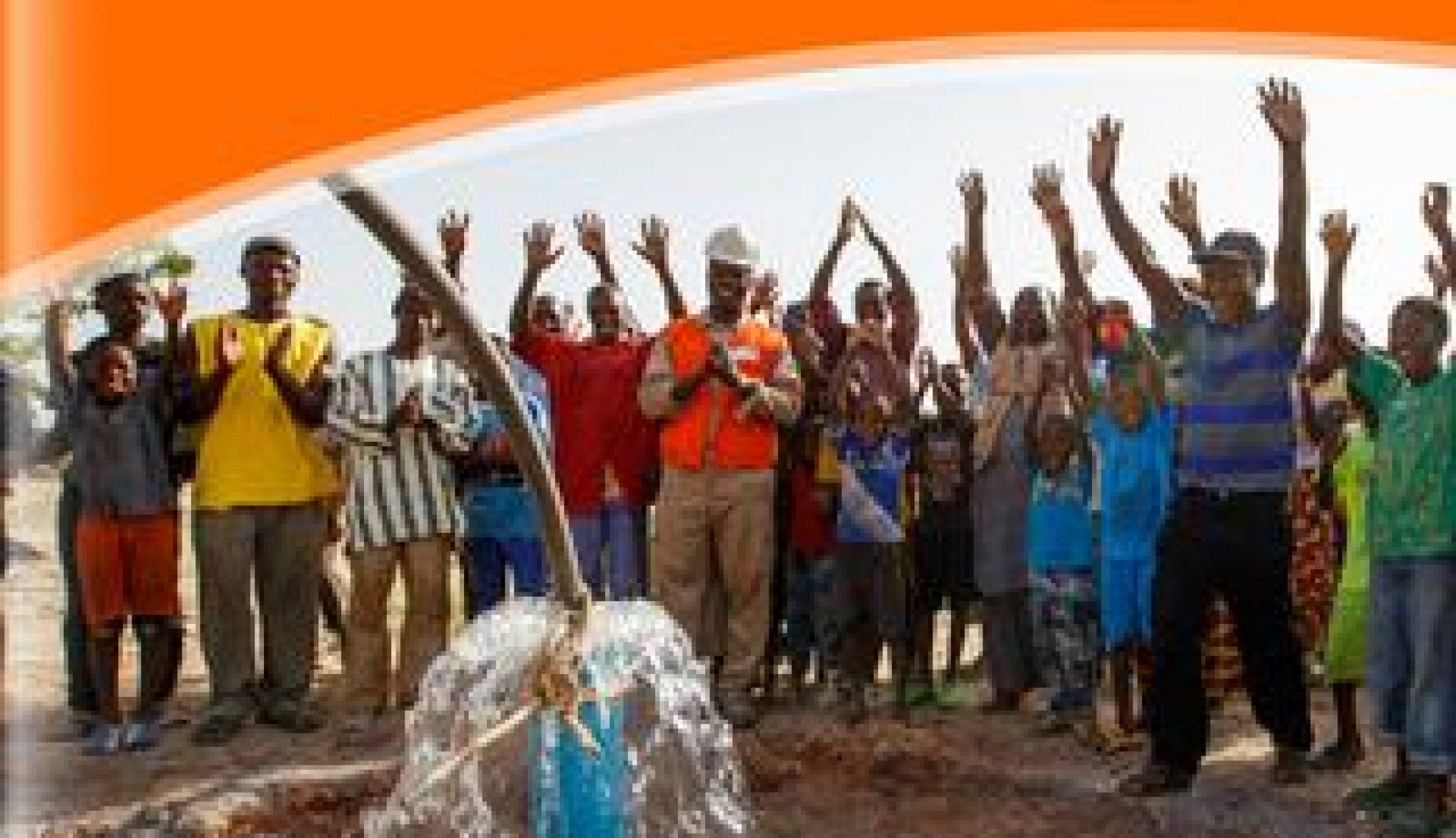 In the four decades since its inception into West Africa, World Vision has become one of the region’s most significant contributors to improving quality of life for the region’s inhabitants.

Back in the 1970s, the Sahel drought killed thousands of people and resultant food and water shortages destroyed millions of livelihoods, especially among those already living in challenging conditions. Though only a decade old, World Vision responded to the immense need it saw in West Africa.

“It quickly became apparent to our staff that most rural villages did not even have basic health facilities and governments often lacked the necessary funds, skilled staff, policies and equipment,” recalls the organisation’s Regional Director for West Africa, Esther Lehmann-Sow. “So World Vision not only supported the community’s efforts to access basic health services, but also worked with governments to train staff, manage community health facilities and strengthen health systems.

“As the emergency response transitioned to rehabilitation, World Vision turned its attention to a new area of work:  ensuring potable water. We started primarily with small water projects in individual communities and then, in coalition with others in West Africa, expanded our programming over subsequent decades.”

World Vision’s holistic approach to relief, development and advocacy in West Africa and beyond has since grown to encompass education, child protection, livelihoods, water provision, improved sanitation and hygiene, emergency response, maternal and child health and more. One of its biggest advantages compared to other non-governmental organisations is this integrated, cross-sector programming approach.

Another advantage is seeing the local community as vital partners in its poverty-reduction work.

“Our most powerful weapon in spreading vital health information has been community health volunteers who bring messages about vaccination, nutrition, prenatal care, assisted births, postnatal care and much more to families,” explains Lehmann-Sow. “Also, World Vision is a faith-based organisation that believes local actors of all faiths play a critical role in the health outcomes of their communities. We have developed tools to engage with traditional and faith leaders such as rural imams and pastors in spearheading behaviour change including healthy timing and spacing of pregnancies, preventing stigma against those with HIV/Aids, and preventing the spread of Ebola in Sierra Leone.

“We are also a child-focused organisation that believes the voices of children should be amplified to participate in their own agenda setting and outcomes. This is why community-based social accountability groups have also been set up to learn more about government standards concerning healthcare provision – especially the strategies and budgets – and how to hold their health providers to account.”

As needs and challenges across West Africa become more complex World Vision is partnering with an increasingly wide range of actors to ensure it reaches people in the most fragile contexts.

“Today, World Vision is becoming more of a convener, bringing together a variety of stakeholders that can and must make a difference for children: whether that’s religious leaders promoting birth spacing or local mayors being asked by communities to account for the budget allocated for the local health facility,” Lehmann-Sow says. “Though we are less ‘hands-on’ than we once were, our objective remains the same: ensuring that each child, especially the most vulnerable ones, can live life to its fullest.”

Such collaborations include the World Vision-led BabyWASH coalition, comprising 30-plus charity, UN and corporate partners, which is helping to tackle the life-threatening lack of water provision, sanitation and hygiene in health facilities.

“And in Sierra Leone we are working with pharmaceutical company Janssen in testing mobile health platforms and biometric technology to improve vaccination campaigns,” adds Lehmann-Sow. “Our collaboration with tech companies and mobile phone companies mean that, in several West African countries, community health workers – even illiterate ones – use our mobile phone technology to better support pregnant women.”

All of this is part of the organisation’s global ‘Our Promise 2030’ strategy which prioritises – among other things – a greater adoption of strategic partnerships and digital technologies in order to ensure World Vision does all it can to contribute to achieve the UN’s Sustainable Development Goals.

World Vision strives to be a learning organisation so that it can not only improve its own programming, but also offer its knowledge and experience to others. Technical staff are regularly assessed and offered training to improve the work they undertake. Many of the courses shaped for World Vision staff are inevitably offered to the rest of the humanitarian sector.

“We have developed a broad catalogue of online learning opportunities, both proprietary and public,” Lehmann-Sow says. “Our nutrition e-learning work, for example, has been particularly well received both by internal staff as well as partners including the Ghana Ministry of Health, the UN and other NGOs.

“We’re working hard to support the development of nationalised training curricula with partnering ministries of health, and have supported training of hundreds of thousands of community health workers over the years. 220,000 were supported in 2016 alone, globally.”

World Vision has also recently restructured to enhance technical support to field programmes, while maintaining national and global policy and advocacy engagements supported by dedicated research and policy staff.  One completely new division that resulted from this restructure will focus on the development of cash programming methodology.

The ultimate measure of success for organisations like World Vision is results. Over the past 35 years maternal and child mortality in sub-Saharan Africa has reduced significantly. Nevertheless, across West Africa in particular, too many children still die from preventable diseases such as diarrhoea, malaria or pneumonia. Also, universal health coverage is still a far-off dream for the most rural households.

“Population growth in sub-Saharan Africa outpaces the investment in public health, meaning that the number of people with unmet health needs increases instead of reduces,” Lehmann-Sow explains.

This is one reason why World Vision continues to prioritise maternal and child health. Globally it has committed $5 billion in investment as part of the Every Woman Every Child Initiative; the UN-led global movement around that issue. Going forward, however, the organisation is also looking at the needs of older and the most at-risk children.

“With the dramatic success over the past few decades in reducing maternal and under-five child mortality, some public health issues are emerging as growing priorities,” Lehmann-Sow continues. “World Vision is very concerned with persistent, severe, moderate and chronic malnutrition for example, and has been increasing its investment in nutrition programming commensurately to combat the issue, as well as supporting global movements to end malnutrition like ‘Scaling Up Nutrition’.

“Also in 2016 World Vision developed a new strategy addressing adolescent health issues, including sexual and reproductive health. Also, recognising that child health challenges are most acute in last mile locations and fragile contexts, we are strategically shifting many of its resources towards these contexts.”

World Vision is an organisation that reads the signs. It knows when to refine and deepen its technical excellence in traditional areas such as water, sanitation and hygiene, and maternal and child health. However, its ability to marshal faith leaders, community health volunteers and a wide variety of partners means that it is well adapted to address the next big thing to threaten the health and livelihoods of West Africans.

“More than ever, we believe in serving the most vulnerable people, in the most challenging situations, in the most fragile contexts, and that we bring a unique experience in this pursuit,” says Lehmann-Sow. “In the spirit of the Sustainable Development Goals we believe that the elimination of preventable under-five child mortality is possible by 2030.

“We intend to lead in that fight, and to join our partners in the celebration when the goal is reached.”