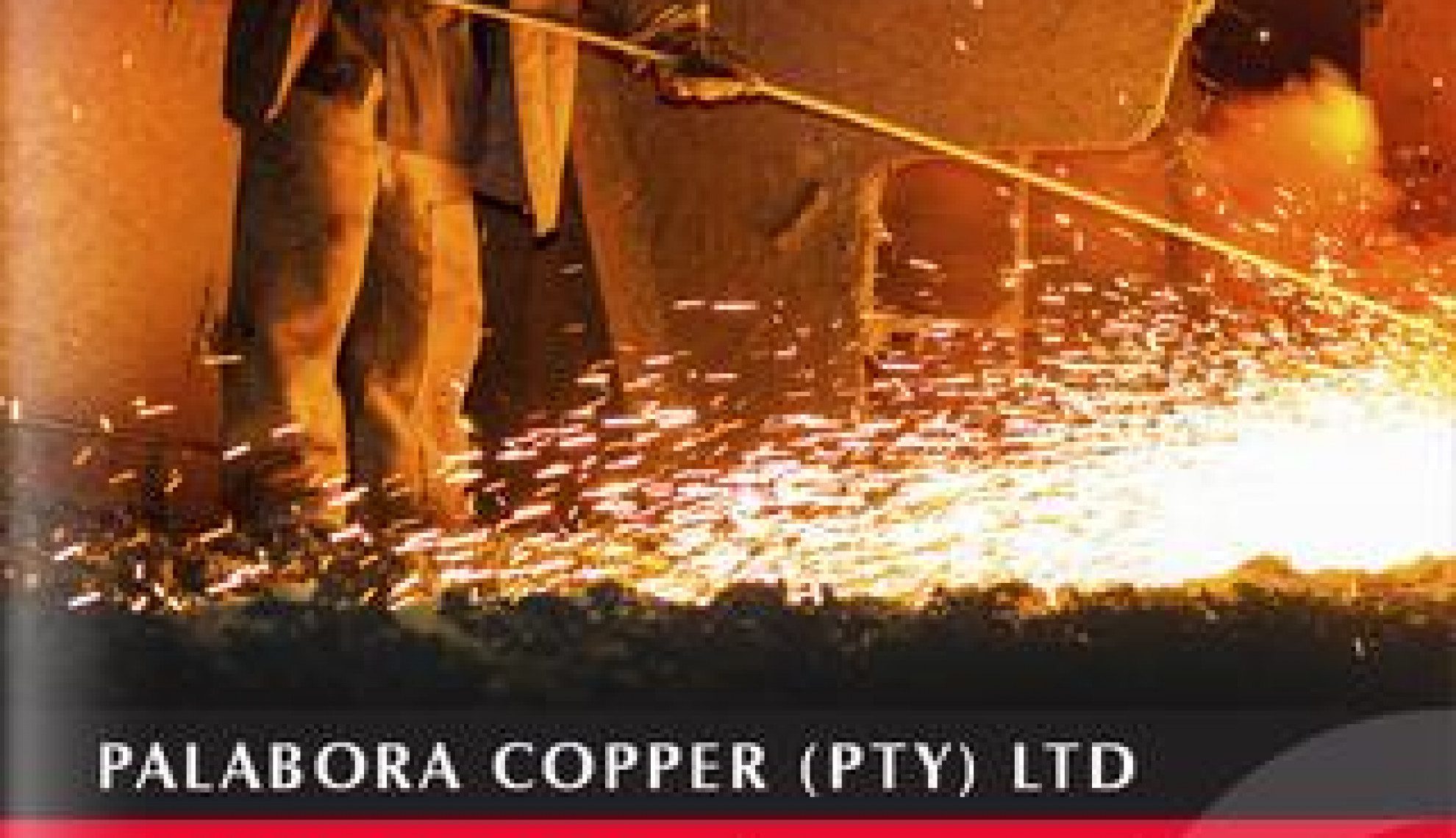 Palabora Copper has built a reputable presence in South Africa for nearly 60 years, leveraging a natural resource which manifested billions of years previously

Palabora Copper (Pty) Limited has capitalised on the world-leading potential of the Palabora Igneous Complex for more than half a century, combining its long-standing optimisation of operational procedures with an ever-developing adherence to internal facets and the progression of its employees.

Known previously as Palabora Mining Company prior to 2013, the company has built its esteemed reputation in South Africa as the country’s only producer of refined copper, providing the nation with 85 percent of its overall copper requirements.

Beginning life in 1956, the business has developed to now produce more than 60,000 tonnes of the mineral each year, supplying South Africa with the aforementioned majority, and exporting the remains to ensure the full fruits of its efforts reap rewards.

Arguably though, the potential of the Palabora Igneous Complex site far precedes the company’s comprehensive growth throughout the 1960s, ‘70s and ‘80s.

“Some two billion years ago, a series of violent volcanic eruptions, which took place over a period of millions of years, gave rise to a rich body of minerals, which became known as the Palabora Igneous Complex,” the company’s website explains. “The unique ore body outcropping at a small saddleback hill, later to be called Loolekop, contains a unique variety of minerals; copper, phosphates, magnetite, uranium, zirconium, nickel, gold, silver, platinum, and palladium. Two other volcanic pipes nearby contain vermiculite and phosphate. “

Now, as the most extensive site of copper mining opportunity in the world, Palabora Copper has diversified, invested and expanded its range of products, services and operations to incorporate a large block cave copper mine and smeleter complex comprising a more than 2,200-strong workforce.

The company adds: “The refinery produces continuous cast rod for the domestic market and cathodes for export. Useful by-product metals and minerals include zirconium chemicals, magnetite and nickel sulphate as well as small quantities of gold, silver and platinum. Palabora has developed a US$410 million underground mine with a production capacity of 30,000 tonnes of ore a day.

“Palabora also owns a nearby vermiculite deposit which is mined and processed for sale worldwide.”

Over the years, the company has made the most of the resources at its disposal, and the reliance that South Africa has subsequently had on the sales of minerals emanating from Palabora Copper.

To become a more well-rounded company however, recent years have witnessed a more concerted focus on the internal capabilities within Palabora’s operations; primarily including health and safety concerns and the establishment of a specific programme to address the trend.

“The safety and health of employees at Palabora Copper is of the utmost importance and it’s a key principle in an efficient and profitable operation. Therefore, the company firmly believes that all injuries, occupational illnesses and incidents are preventable,” the business states. “All employees and contractors undergo entrance and exit medical examinations when joining and leaving the company. During their course of employment they are subject to routine medical examinations. Routine examinations are risk based and provide a comprehensive health profile of each employee.

“In October 2011 – following three months of increased safety incidents, which led to the worst safety record in Palabora’s recent history – we embarked on an ambitious enterprise-wide LeKgotla process. Working with the Amsterdam-based Kgotla Company, we put this highly potent dialoguing process into practice within Palabora’s organisational setting, engaging 3,800 Palabora employees and contractor employees.”

Having since institutionalised the process, Palabora LeKgotla exists as an ongoing dialoguing process which encourages all employees to share and voice areas of concern to create a company-wide solution forum and which is benchmarked by numerous divisional reviews over the course of each year.

“Since the October 2011 LeKgotla, we have held several subsequent LeKgotla sessions. These have spanned the operational areas of processing, mining, technical excellence, training and the rod plant,” the Company notes.  “We understand that we need to work relentlessly to foster a climate in which principles of responsibility and accountability can be practiced every day. That means building an organisation where it is safe for people to create visions, where inquiry and commitment to the truth are the norm, and where challenging the status quo is expected and accepted.”

LeKgotla has consequently instilled a much stronger organisational climate within Palabora Copper, paving the way for the company’s general people and skills strategies to flourish.

The Company says: “From the time the mine started operations in the mid-1960s, Palabora has been at the forefront of employment practices in the local mining industry. Palabora employs approximately 2,200 people, with competitive employment conditions in the industry.

“The Human Resources division is an active partner in facilitating the company’s objective of ‘resourcing for success’ and the creation of a self-motivated and progressive Palabora workforce, that is focused on business objectives, while achieving personal and career growth, as well as self-fulfilment.”

Striving to be an employer of choice within the mining industry, the attraction and retention of talent is pivotal, leading to the business adopting a series of initiatives including significant remunerations and bonuses; extensive employee engagement; internal promotion opportunities; ongoing training and development; and perhaps most importantly, the promotion of organisational development.

This final facet encourages each employee to make their own entrepreneurial mark on Palabora, as it continuously opens its ears to new techniques, systems or procedures.

Enriching lives both inside and outside of the Company, Palabora has gone to great lengths to fulfil its South African Mining Charter obligations as well as its BBBEE activities.

“Palabora has developed a comprehensive transformation strategy supported by a set of policies and procedures that seek to address the seven elements on the BEE scorecard,” the Company says.

This incorporates not only fostering an inclusive work environment to maintain its role as an “equal opportunity workplace” but also BEE procurement which has seen Palabora’s BBBEE spend dramatically increasing since the turn of the decade.

Spreading its influence even further, Palabora also places a concerted emphasis on its corporate social responsibility (CSR) efforts to share its wealth and knowledge outside of the mining domain; leveraging its transporting operations and subsequent ability to bridge the infrastructure and technological gaps that often appear in more rural areas of South Africa.

“Palabora hosted a charity golf day in the latter part of 2014 in an effort to raise funds. The project was aimed at initiating a dialogue amongst transporters to raise funds together to support the communities,” a report on the event stated. “On 5 March, 2015, Greenvalley Primary School, based in Acornhoek and a home to 1,300 learners, received their long awaited computer centre.”

Sanda Zungu, Manager of Supply Chain & Logistics at Palabora added: “These road transporters are already doing a lot to support and develop the communities in which they operate, however when those efforts are not concerted, the impact becomes minimal, benefiting only a limited number of people in the community.

“Therefore, Palabora Copper will continue to encourage its contractors to get involved and contribute towards projects aimed at uplifting and developing the communities in which we all operate.”

Embracing peripheral areas of people development, health and safety, BBEEE and CSR not only enhances Palabora’s reputation even further within South Africa but helps build a bedrock of sustainability from which its core mining activities can flourish.

Across its primary copper product, as well as its magnetite, nickel sulphate, anode slimes, sulphuric acid and vermiculite compliments, its core and industrial mineral divisions are in a stronger position than ever before to optimise the natural potential that the Palabora Igneous Complex provides.

Through this, the Company continuously invests in and updates its underground mining techniques, as well as its concentrating, smelting and refining operations, while the industrial component is similarly progressive regarding its vermiculite functions.

Offering services across sample development, analytics, fire assaying and quality control assurance, Palabora Copper is in a prime position to fulfil a mission and vision that have been consistent in the Company’s continuous improvement strategy since day one.

“Palabora’s strategic objectives which are key drivers towards the achievement of its vision are: to create a strong enterprise; to optimise operations; resource for success; sustainable long-life values; integrity; courage; care; and teamwork,” its website emphasises.

Moving forward, it is these philosophies which will affirm Palabora Copper’s position as a recognised market leader in the mining industry.