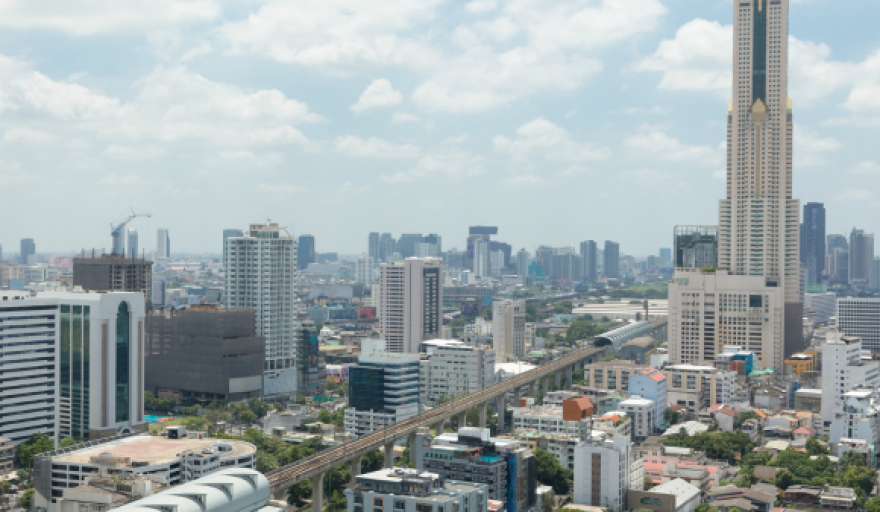 On track to reach a population of 2.4 billion by 2050 and an overall quadrupling of inhabitants in just 90 years, the continent’s need to industrialise and provide employment for these citizens is more pressing than ever.

This means substantiated development of infrastructure. New estimates by the African Development Bank suggest that the region’s infrastructure needs amount to between $130 and 170 billion a year, with a financing gap in the range of $68 to $108 billion.

“The rate of new infrastructure projects being brought to market and closed is too slow, unfortunately. What I often tell people at conferences is not that there is a lack of capital, but rather a lack of good, bankable projects.

“Tender processes run by governments can also go awry, which is another contributing factor to the deficit.”

However, as a latecomer to infrastructure development, Africa can exploit the advances in technology, construction techniques and falling prices of clean power, learning from the experiences of other regions to ensure it builds sound projects from the outset.

This is where financiers such as AIIM come to the fore.

As a private equity investor, the group is a prime example of how the private sector can contribute to closing Africa’s infrastructure gap.

Indeed, the Infrastructure Consortium for Africa finds that just 2.8 percent of investment channeled into such development comes from private sources, with 42.1 percent deriving from national governments, 23.8 percent from China, and 24.1 percent from bilateral donors.

It is a figure which AIIM is determined to increase, and for West the opportunity to combine financing and on-the-ground experience was too good to turn down.

“I originally trained as a scientist and worked in the UK for Thames Water before returning to South Africa and joining a consulting engineering company,” he recalls.

“My focus here was helping to get projects off the ground in the power and water sectors, so I spent a lot of time advising developers on issues from choosing where to base projects to securing permits and licenses. Sometimes we would work on the sequencing of projects, identifying what should be done and when to ensure a development comes to fruition.

“It got to the point where I wanted to do more, so I went back to university and completed an MBA and focused on strategy and finance. It was at this stage around nine years ago that I came across AIIM. It struck me as the ideal organisation where I could impart my practical experience with the financial and strategic knowledge I had acquired.”

West joined the organisation in 2010 just after its second fund was raised, an event which marked the beginning of a drive to venture beyond South Africa’s borders.

AIIM’s 19-year history makes it one of if not the most experienced private investors in African infrastructure. So far it has raised more than $2.1 billion in equity across seven funds which has led to over 50 investments in 15 countries.

“Being able to see a project through from start to finish and witness the benefits it has on society is incredibly satisfying,” says Ashwin, who goes on to explain some of the criteria AIIM assesses when choosing what projects to finance.

“The first port of call is to make sure a project fits our mandate. While this is fairly broad and sounds simple, it must be an infrastructure project on the African continent. The second criteria centres around fitting in with our existing portfolio and making sure it remains diverse.”

Further, any investment must carry with it what West describes as a compelling rationale.

“Does it make sense to add another hydropower station when the country already generates 90 percent of its power from this source?” he continues. “Those are the sorts of questions we ask.”

Sustainability in many guises – namely social, environmental and financial – rounds off the AIIM thought process.

On the social and environmental side, it has a team of dedicated employees who assess projects against stringent international standards, the group not afraid to reject investments on these grounds.

“Finally, there are financial factors to do with making a return and sustainability long-term,” adds West.

“It must be viable over a 20-25-year period. For example, we would red flag a case where power from the project was being sold at well over the standard tariff for the country. Infrastructure is very capital intensive, so to make it affordable the financing must be carried out over a long period of time.”

Asked to identify a particularly pride-inducing project, West points to the successful completion of a landmark power station development in western Mali, near the Senegalese border.

An eight-year programme, AIIM’s involvement came in the final 18 months, securing financial close in 2017 which prompted the site’s construction. In October 2018 the 90 MW HSO-fired power station was completed and has since been contributing enormously to the country’s energy generation capacity.

“This is a particularly interesting one for us because it was our first in Francophone Africa and the first independent power producer (IPP) project in Mali,” West says.

“It was a pathfinder project and has opened the door for other IPPs to enter the country, and one other has closed since. More importantly, it added significant capacity to the Malian grid, expanding it by about a quarter which is phenomenal.”

West also highlights the structure of the financing as a first for AIIM. “We used euro debt as well as local currency debt, and used traditional libor-type financing in tandem with Islamic finance for the first time as an organisation,” he explains. “The result was a competitive rate and well-executed project.”

The development didn’t stop there.

Several corporate social investments ran alongside the power station construction, including the refurbishment and expansion of a medical clinic in a nearby town, and installation of clean running water facilities in the closest village, part of wider masterplan to upgrade water provision across the municipal area.

This example, one of many West could have drawn on, is a template for how private equity can increase its share in the African infrastructure financing realm. If the aforementioned 2.8 percent figure is to travel upwards as it urgently needs to, more Mali-inspired projects need to achieve lift off and be seen through to closure.

For West this is a major priority. Citing aims to grow AIIM’s assets and diversify its portfolio in a responsible manner, the Investment Director ends on an upbeat note.

“Am I an optimist? Yes, absolutely. These projects take a long time and one has to be confident that they will close, and that Africa’s infrastructure deficit will be reduced as a result.”