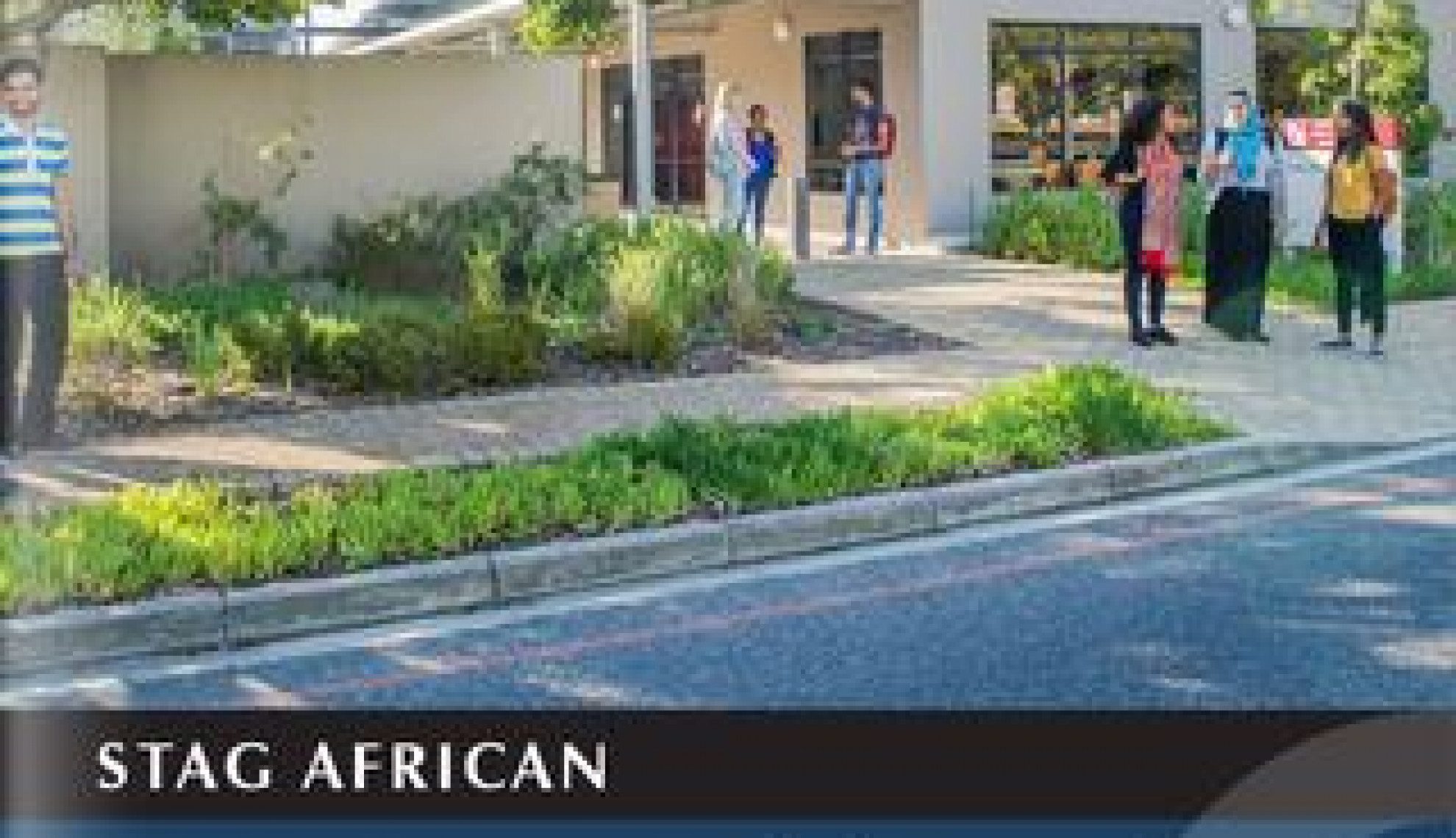 International Expansion given the Green Light

STAG AFRICAN is well on its way to achieving its goal of being the most innovative green Company on the continent as it looks to build upon a business model that has taken the property development market by storm over the past six years.

Progressing as an established traditional construction business throughout the 1980s and 1990s, the Company’s gateway to the reputation and market prominence synonymous with today’s STAG can be traced back to 2009, and the strategic decision to challenge what the Group perceived as an outdated and costly student accommodation market.

Catering to a sector where affordability is of the essence, the idea was to overhaul the niche market by introducing the most modern international design and build techniques, using more green and sustainable products, with the lowest end cost possible as a result.

“We wanted to come up with an optimal concept to reduce the costs of providing accommodation to students, and it was architectural design and product innovation that achieved this,” recalls STAG AFRICAN’s Managing Director (MD), John Schooling. “We looked around the world for the best facility building system and came across one known as lightweight steel framing which we began using, and really pioneering, on accommodation in South Africa.”

Subsequently branching out across the surrounding region from its South African headquarters, STAG went on to complement this acknowledgement of the 21st century construct with six guiding principles which have formed the basis for the overall business model ever since: sustainability, flexibility, technology, innovation, affordability and community.

Regarding the latter, Schooling elaborates: “If you look at the community aspect, it’s about creating a very personal space in a student campus environment. The bedroom becomes the student’s home, the rest of that floor becomes the street in a village, and that village or neighbourhood is the campus.

“We essentially place the student at the centre of the design process.”

This theme continues even more significantly in making the accommodation as affordable and sustainable as possible, initially through the recyclable and innovative products being used in the construction process, but also from the planning stage in removing any space wastage from the final layout.

This concept was first brought to light after completing its first project in the sector to the tune of 600 beds, using traditional brick and mortar construction methods.

The challenges and costs engrained into the development were enough for STAG to identify such an opportunity for improvements to be made, as the Company began looking at alternative methods under the banner of ‘21st century projects’.

“Over the first couple of years we had some resistance, with both South African and international markets still considering brick and mortar to be the quality method,” Schooling says. “Slowly but surely though, through extensive and profound educational processes, the government of South Africa got to the point where they were comfortable with and began endorsing this kind of innovative approach.”

Business quickly snowballed from this point, with the 620 initial beds rising to 2,000 at present, with a total of 20,000 in the pipeline, comprising completed projects, those under construction and those still in the planning stages; equating to around R4.5 billion of work.

“We want to build that up to 50,000 eventually which would be around R10 billion of work, with at least 30,000 beds constructed and under management over the next five years,” Schooling adds. “We have some exciting new developments happening across the region, while also capitalising on the green agenda in exploring the possibility of building solar farms to help the provision of energy in sub-Saharan countries.”

Schooling sees STAG’s commitment to green development as one of the Company’s biggest advantages, with all the benefits there to make it the preferred way of building in the future.

“We really want to promote green and to build sustainable buildings, using modern technologies,” the MD explains. “We are investigating the use of photovoltaic on all our buildings, for example, in the hope that we will be able to assist Eskom in South Africa by taking our buildings completely off the grid in the future.

“Our aim is to be known as the most innovative green company in Africa across not just student accommodation but all our projects.”

In time, no business in STAG’s industry will be successful without taking green into account, making knowledge and education in this area pivotal in the intervening years, in order to make it a sustainable progression.

As such, STAG is already developing skills in its local areas of operation to prepare for the modern construction sector; an initiative which fits perfectly within the Company’s much more encompassing philosophy of enriching lives across the SADC region.

“What we promote throughout our development is ‘investing in SADC, by SADC, for SADC’,” Schooling says. “Not enough is being done at the moment to promote internal development so our aim is to benefit SADC countries by keeping finances within the region rather than looking offshore, and we are already receiving a lot of support from PRCs and the government in South Africa to develop local communities, where possible, in building our structures.”

This commitment to local enrichment and corporate social responsibility entails an openness and sharing mentality within the region and industry, supporting the sector where possible and areas such as BEE as an indication of feeding positivity within the wider domain.

The Company’s supply chain management strategy continues in this vein, utilising local partners in each country; once again, in order to retain the financial implications of such partnerships within the relevant nation.

“We try to keep our structure as flat as possible and are achieving that by decentralising as much as possible,” Schooling says. “Using local contractors and building up a pool of suppliers and partners across the region also allows us to expand very rapidly into new markets while, in turn, helping some of these small companies grow and develop themselves.”

So far, this expansion outside of its core South African operations has incorporated Mauritius, Mozambique and Zambia, with Botswana, Madagascar and Namibia firmly in the pipeline and Zimbabwe another exciting prospect looking further forward.

It is this entrepreneurial approach and readiness to expand quickly which is sure to help achieve STAG’s project aims, which not only comprise the Company’s student accommodation component, but also brings to light a further five or six million square metres of bulk construction to be carried out across office blocks, shopping centres and precincts, and a similarly significant increase in the amount of medium-sized enterprises that the business looks to gain shares in over the next 12 months.

“Underpinned through all of this will be the process of skills transference and the development of companies within SADC, as we continue to take a holistic approach and offer the total package,” Schooling concludes. “We go in with an investment mentality knowing that our money isn’t going anywhere outside of the SADC region and that any profit we make will be reinvested back into those countries.

“This is a very important message as it further aids those levels of sustainability; not just for our company, but for the entire industry.”