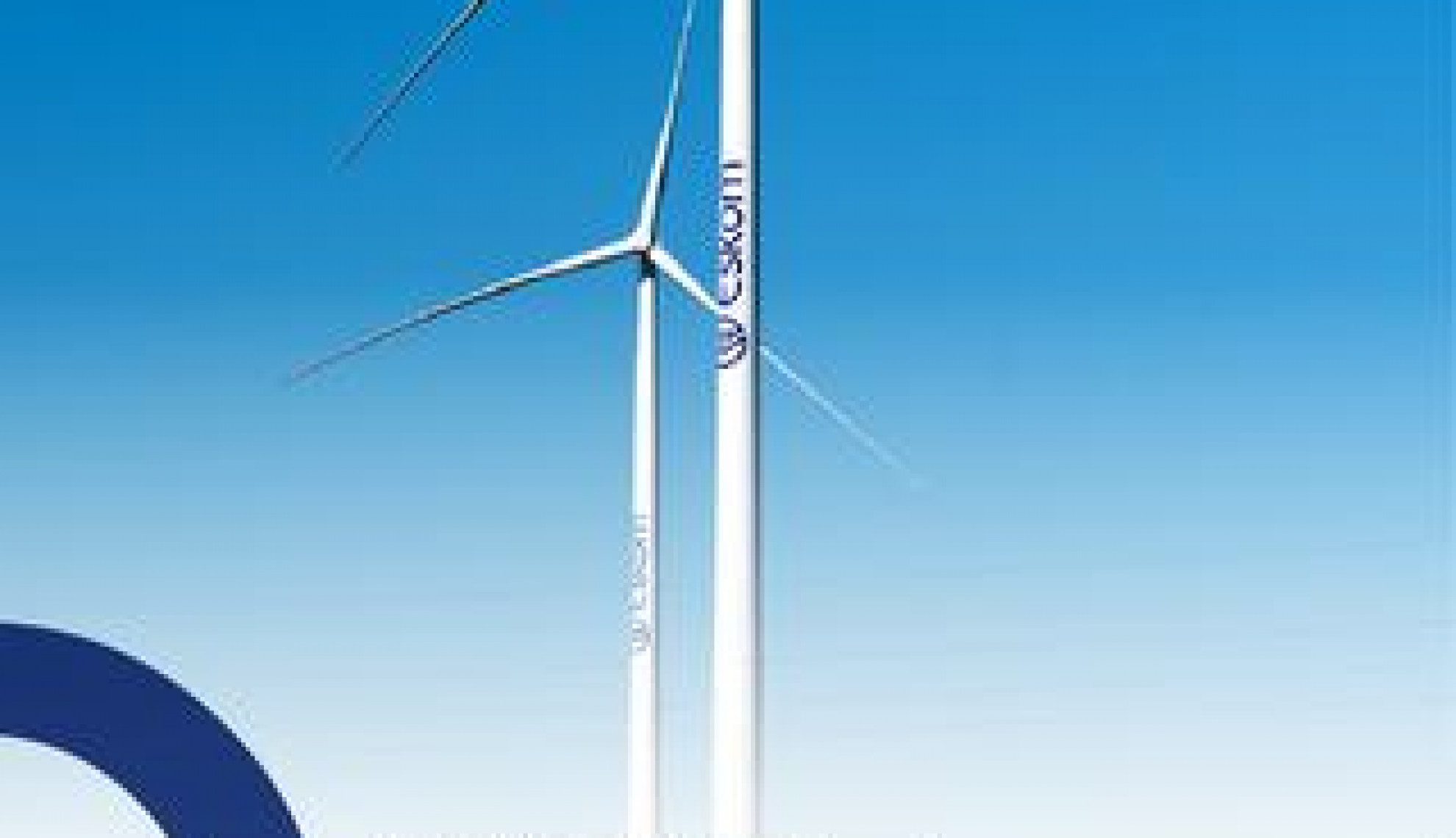 Striving for a greener South Africa

Sere Wind Farm has the tallest turbines of any renewables project in South Africa, meaning their turbines are hub and shoulders ahead of the competition

Sere Wind Farm is Eskom’s first full utility scale renewable energy project and is situated on the Western Cape Province of South Africa, located north-west of Vredendal, approximately 350km north of Cape Town. It sits on a 3,700 hectare plot of land in Skaapvlei near the town of Koekenaap and will cost an estimated 2.5 billion rand.

Luchen Reddy, Eskom Project manager, for the wind farm, states although there were times that we thought the development of the project would not continue due to funding constraints, the project is now running on schedule: “the project started in 2006 with commissioned design ideas looking at options for the wind farm. We had early issues to deal with for funding and the project was shelved a few times until suitable funding was secured. The co-funders for this project are the world Bank, African and French Development Banks and the Clean Technology Fund, who began to really get the project off the ground in 2010.” Eskom, the owners and operators of the Sere wind Farm, gave their full approval and go ahead for the project in June 2012.

The Sere wind Farm project was a product of Eskom’s Renewable Energy Business unit, through which it is hoped that similar projects will be undertaken by the utility. The project created over 500 direct jobs during its construction and bring significant economic activity to the Matzikama community. Eskom Renewables will also train and employ full time skilled technicians from the local community to operate and maintain the facility over its life.

Building From the Ground Up
Project construction officially began in April 2013, with the clearing of the site. This included building large access roads for the heavy turbine machinery, which commenced in July. The first foundations for the wind turbines were poured in September 2013. To be able to gauge the sheer scale of wind turbines, you need to first take a look at the size of each foundation.
These bases are 20m in diameter and made of reinforced steel and concrete, which must be continually poured into the cast for 9 hours straight. This equates to about 420 cubic meters of concrete per turbine. For the 46 turbine foundations to be constructed, 44 tonnes of reinforcing materials per foundation are required.

“As of 1st September 2014, we have 37 of 46 turbines erected, mechanically viable, assembled and in position. It has not been easy though as wind speeds are a problem when erecting the turbines. You need those high speeds for the best power generation, but it does lead to problems and delays when erecting them. At the current rate, we should have the turbines all erected by mid October 2014, weather permitting,” remarks Reddy. The plant is planned to be grid connected before the end of 2014, with commercial power generation achieved by March 2015. Successful construction of this plant will position Eskom for possible future developments of wind plants.

A wind farm is a mammoth project that requires specialists from various sectors to come in and work on very different parts of build, ranging from high voltage electrical wiring to fixing the blades onto the turbine hubs.

The Sere Wind Farm construction work has been broken down into three main contracts or work areas as detailed below:

● Firstly, Siemens Wind Power Denmark are constructing the main turbine foundations and all internal access roads; supplying and erecting the turbines and running the cables between turbines and the substation.

● The second contract is with Raubex Construction, who are responsible for the construction of the three main buildings on site, which are; the substation, a workshop and the visitor centre. This is a new substation that will link to the existing substation for evacuation of power to the national grid.

● The third contract is a joint venture between Stefanutti Stocks Power and Powertech who have completed all electrical work in the substation and have constructed a 44km 132Kv distribution line linking new substation to an existing one. The line was officially energised on the 11th July 2014.

“This has been a massive undertaking for us, in particular the logistical challenges for bringing heavy equipment and parts to the site. The N7 roadway had a lot of road upgrades during our construction phase, which slowed processes down and we looked for alternative ways to bring all the components together so that we could remain on schedule,” cites Reddy.

Locally Staffed, Internationally Trained
With construction already having been underway for 17 months, the level of workers on the site has grown, with Sere Wind Farm having up to 580 people on site at peak production; ranging from contractors, workers and other officials. The contractors hired to work on the buildings and power lines were made up predominantly of local labour, situated in a 50km radius from the site. The Siemens employees with international experience assisted with training of locals. “We recruited 7 people from the local community and trained them with Global Wind Services, incorporating them into the installation team,” Reddy continues: “By giving the local workers such a high level of on-the-job training from an internationally recognised company, the workers are able to use these skills to ensure that when the project is left in the hands of local engineers, they will already be well versed and skilled in maintaining the site and all of its components,” highlighted Reddy.

The 10 operating staff that Eskom will have on site have already been appointed, including an Operation and Maintenance Manager for the Sere Wind Farm. Time during the construction phase has been used to train the operating staff. The training programme is offered by SARETC (South African Renewable Energy Training Centre) and SAW EA (South Africa Wind Energy Association), in cooperation with GIZ (Deutsche Gesellschaft für Internationale Zusammenarbeit). SARETC offers assistance and training to suitable candidates in order to become qualified as wind turbine service technicians for the upcoming wind farms in South Africa. As a member of SAW EA, Eskom was invited to send newly recruited O&M staff. This training was supplemented by training provided by Siemens under the supply and installation contract.

Not just Power Creation, but Infrastructure Creation
With Sere Wind Farm edging ever-closer to its commercial operation date, the opportunities for both power generation and local infrastructures are increased for a multitude of businesses. Wind farm developments mean that there are more vessels docking in local ports, in turn garnering the need for more investment in order to upgrade deep sea capacity, greater volume handling and loading/unloading capabilities. The current roadways and highways will be developed and upgraded, through direct investment from foreign and domestic sources, allowing other businesses greater access to the regions via roads that can tolerate heavy loads and cargo.

By bringing new businesses into the country, Reddy hopes that turbine part manufacturers will look to move in-country and set up warehouses and manufacturing plants accordingly, enabling Eskom to procure their replacements with a much faster response time, meaning shortened downtime for the wind farm as a result. Eskom, as a state-owned utility, is positioned to assist with the development of local manufacturing, in order to achieve the social and developmental objectives of the country.

Local Education
Educating the local population on the premises behind wind farm construction and what the renewable energy can offer the population is something that Reddy and Eskom are very keen to emphasise. By utilising the onsite visitor centre, Sere Wind Farm will help locals understand the role wind power plays in creating a sustainable future for power generation, and help schools to educate children on how turbines work. The visitor centre will also have regular meetings with local communities and forums with local farmers and local communities, enabling them to have a better socio-economic understanding of what the wind farm can offer. “The wind farm visitor centre really gives us a chance to show the local communities just what these huge structures are doing to help create cleaner, greener energy for the future. We get the chance to teach young school children about the turbines and how they turn wind into electricity that can directly power their homes while reducing C02 emissions. It is exciting to be able to do so while seeing the turbines in action across the site,” proclaims Reddy, who goes on to add with enthusiasm: “I think this will show the community that we are trying to make a difference for a renewable, greener South Africa.”